The Three Lions supporters were arrested after trouble in Munich on Monday. 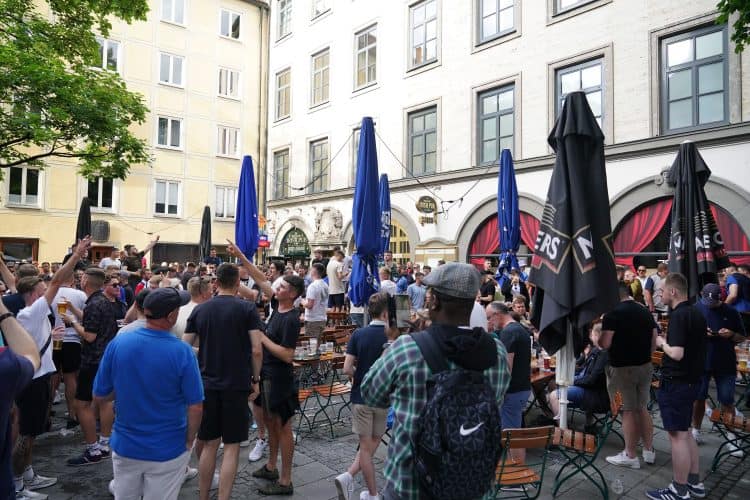 England football fans in Munich have been arrested for making Nazi salutes and for damaging a hotel room ahead of the Nations League tie with Germany on Tuesday evening, local police said.

Eight England fans were arrested on Monday, largely in the downtown area of Munich, despite insisting they were determined to repair their damaged reputation, particularly in light of the unsavoury scenes at Wembley during the Euro 2020 final.

Three of them were arrested for making Nazi salutes while police said another fan caused an estimated 2,000 euro (£1,700) damage after he let off a flare inside his hotel room.

Four others were arrested for incidents including insulting police officers and urinating in the street.

Many of the troublemakers were dealt with by being ordered to pay a security deposit of around 200 euro (£170) – the local equivalent of an on-the-spot fine – while two who were unable to pay the money were brought before a district judge.

Some bars in the city closed early on Monday after becoming overwhelmed by the number of customers as large groups of fans wearing England replica shirts and carrying flags sang in the warm German sunshine.

Other pubs did not open at all on Tuesday after reports of incidents getting out of hand among some supporters.

Police were called to one “brawl” on Monday, reported to have involved 30 to 50 England fans, but said it had dispersed by the time armed officers arrived on the scene.

There are fears of further clashes later on Tuesday after some England fans bought tickets in the German-supporting section of the Allianz Arena.

A Munich police spokesman told the PA news agency that police would only be able to stop England fans going in the “home” end if there was an expectation they may cause trouble.

He said that 700 police officers had been deployed to deal with the influx of England fans to the city since Saturday, considerably more than would be working for a Bayern Munich football match.

It comes after a plea from England manager Gareth Southgate for fans to behave.