The Sports Direct tycoon held court at the company’s annual general meeting at its head offices in central London. 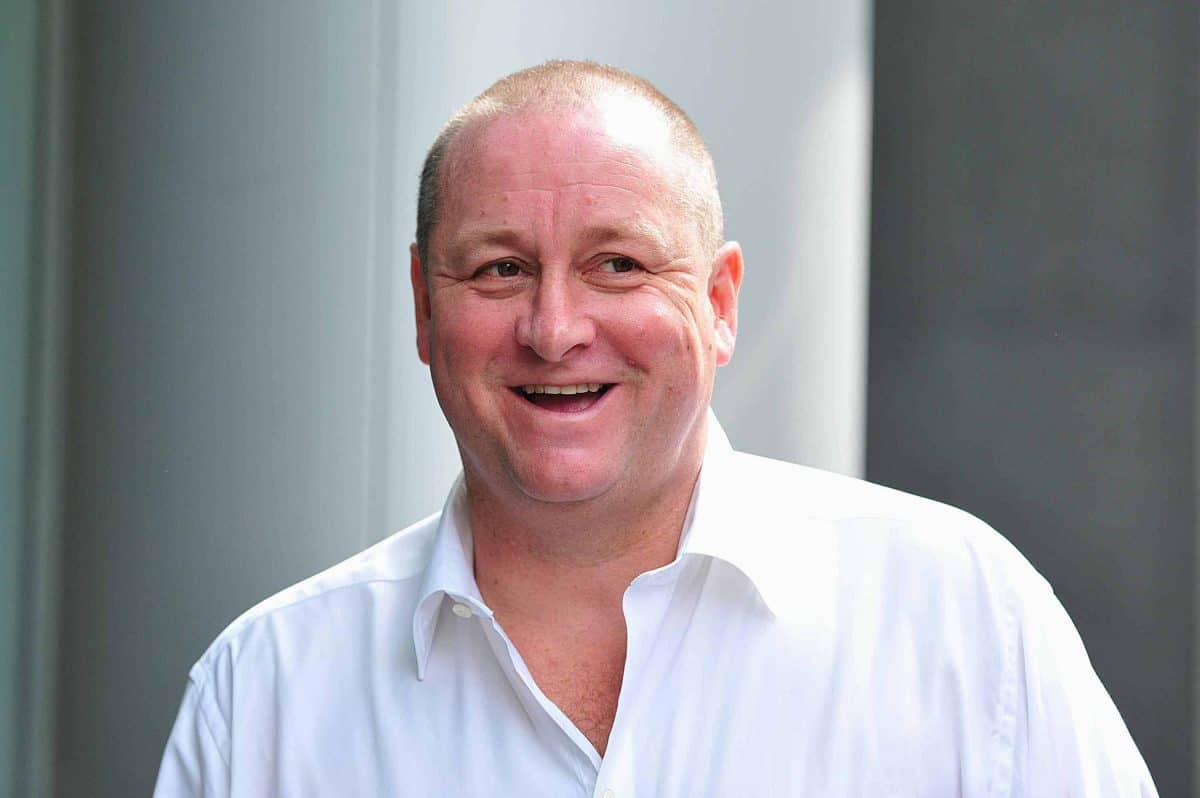 Before the startof Sports Direct’s AGM there had been protests by Newcastle United Football Club supporters, angry at the tycoon’s stewardship of the club, which he owns.

A heavy police and security presence was also in place, with security guards escorting shareholders to and from the meeting, where tea and coffee was served.

Outside the offices, the media gathered after Sports Direct decided that journalists would not be allowed to observe the meeting – in contrast to the vast majority of other retailers who allow guests to attend.

The London Magpie Group held a visible protest outside Sports Direct’s AGM as Mike Ashley once again railed against being portrayed as a “pantomime villain” inside the Oxford Street building.

A group of fans held banners for the waiting media, handed out fliers and even put a flier on Ashley’s Bentley as they sought to draw attention to failings in his ongoing ownership of Newcastle.

The Group Tweeted: “We paid a visit to the @SportsDirectUK AGM this morning to let Mike Ashley, Sports Direct shareholders and the media know how we feel about his continued ownership of our football club.”

Mike Ashley insisted his “elevation” strategy to change Sports Direct from a discount retailer to the Selfridges of sport is still on track – although it might take longer than first thought.

He made the comments to shareholders at the retailer’s annual general meeting in central London on Wednesday morning, heaping praise on Michael Murray, head of elevation and Mr Ashley’s soon-to-be son-in-law.

At times looking bored, at others animated and cracking jokes, the retail tycoon also said House of Fraser remains an ongoing challenge but one he was willing to face.

He ruled out calls for an independent review into corporate governance, revealed he “begged” Debenhams to stop paying a dividend and explained he wanted a Big Four auditor for the business as a “tick box” exercise to prove his critics wrong.

There was no update on the £605 million VAT bill being demanded by Belgian authorities, which Sports Direct is challenging and caused delays to results being published earlier this year.

Shareholders were also left in the dark over who will audit the business, after Grant Thornton quit.

Business Secretary Andrea Leadsom is now expected to appoint one on Sports Direct’s behalf after PwC, Deloitte, KPMG and EY all ruled themselves out.

Voting took place, with all resolutions passing, including Mr Ashley being re-elected as chief executive.

However, nearly a third of independent investors voted against the re-election of Mr Ashley, who controls 62% of the firm, following a difficult year.

Following the vote, the businessman agreed to a request to answer questions on broader topics.

The most contentious issue remains the company’s lack of auditor.

Having previously suggested the need for a Big Four auditor was due to Sports Direct’s size, Mr Ashley said the decision to appoint one was a “personal one”.

When asked why he was “obsessed” with a Big Four auditor, he explained: “If you don’t have a Big Four, people will always say, ‘There must be a reason’. That’s the criticism I get levelled at me.

“Trust me, it’s just a little tick box. You’re right, maybe it’s something I’m stuck on and I should stick it in a draw for the next decade and not worry about it. For me it’s a tick box exercise, ‘Ok, people said I couldn’t get one – well, I want one now.’ That may sound like an answer that’s – how can I put it – not got enough reason behind it, but for me, it’s a little tick box.

“It’s like having the biggest lawyers – having one of the magic circle. (People say) ‘Oh, you’ve got them’ and I say ‘Yeah’. It’s little notches and achievements as you go through life. It will not change Sports Direct, but maybe it’s a personal thing.”

Sports Direct remains under pressure as it attempts to grapple with integrating House of Fraser into the business, along with several acquisitions and bids being made throughout the high street and beyond.

But Mr Ashley said he has full faith in Mr Murray and the elevation strategy of improving stores, whilst rolling out luxury fashion label retail brand Flannels.

He said: “It is the success of SD going forward is the elevation strategy. I tend to not focus on much else other than that.”

On Flannels, he explained: “I think they are better than any other stores in the market. Now, I might have rose-tinted glasses but one of the reasons is because I have absolutely nothing to do with it. I just sign off the money. It has nothing to do with Mike Ashley.

“It’s not just a few show stores. When you have a pipeline it takes time. I’m telling you – this is for real. The reality is, I’m telling you it is real and the proof of the pudding will be when they start to roll out. It’s happening, it’s coming. It’s just not as fast as I would like it.

“I’m going to do the same with House of Fraser and get around to elevating. The modern-day consumer – that’s what they want. It could be Stone Island, it could be Nike and Adidas – it’s all about the branded world.

“Maybe I was late to the party, I accept that. Maybe my son-in-law should’ve gone out with my daughter when she was 12, but now we’re on it, nothing’s going to get us off it.”

Other questions from the 40-odd shareholders in attendance included when he would introduce a dividend.

But Mr Ashley pointed out that HBOS and Debenhams had a dividend, but both subsequently went bust.

Another asked whether he would consider holding an independent review into corporate governance, but was slapped down with the reply: “100% absolutely not.”

Mr Ashley also spoke at length about the need for business rates to be overhauled, saying he would be happy to meet with MP Frank Field, who has questioned the businessman previously in Parliament.

After the meeting on the sixth floor of Academy House, overlooking the East End of Oxford Street, Mr Ashley mingled with shareholders before being led away by his advisers.

Before the start there had been protests by Newcastle United Football Club supporters, angry at the tycoon’s stewardship of the club, which he owns.

A heavy police and security presence was also in place, with security guards escorting shareholders to and from the meeting, where tea and coffee was served.

Outside the offices, the media gathered after Sports Direct decided that journalists would not be allowed to observe the meeting – in contrast to the vast majority of other retailers who allow guests to attend.