Liverpool were coasting to victory with one of the largest leads in footballing history when superfan Mark Gretton had ‘Premier League Champions 2019/20’ tattooed on his arm in January. 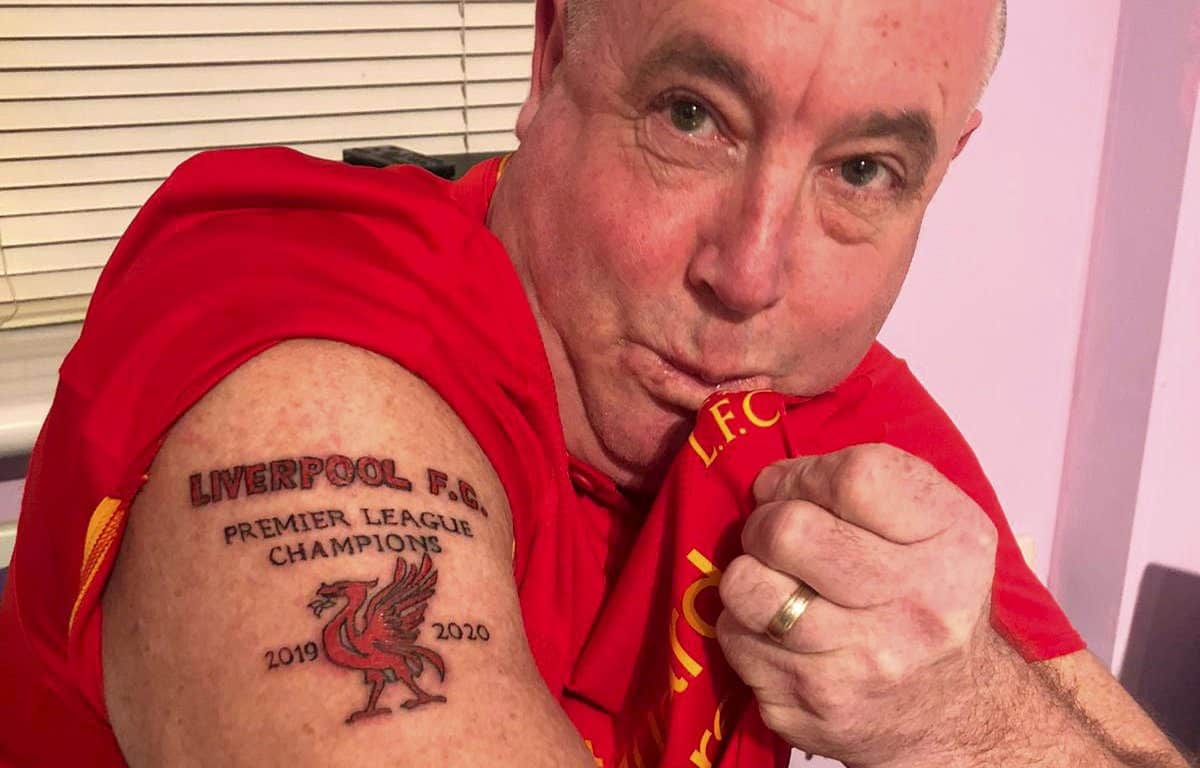 A die-hard Liverpool fan who had ‘Premier League Champions 2019-2020’ tattooed on his arm has “no regrets” – and hopes to raise cash for the NHS.

Liverpool appeared to be coasting to their first title in the Premier League era in January when superfan Mark Gretton had the tatt done.

But when the coronavirus struck, all professional football in the UK was put on leaving Liverpool’s dream of a maiden Premier League title in limbo.

Mark, 53, said: “Some bookmakers had already started paying out because it was almost a forgone conclusion that Liverpool would win.

“We were about 1,000-1 on to win the title. But then a pandemic came along – who could have foreseen that? You can’t plan for that.”

The lifelong supporter has vowed to keep the Liverbird tattoo as a mark of his team’s ‘moral win’ if the Premier League is cancelled, denying Liverpool the title.

Mark, a dad-of-four, said: “I have no regrets. If they cancel the league – which I doubt – I will say we have morally won.”

He added: “I’m sure there will soon be some sort of badge to show our respects to the NHS staff fighting for us on the front line. I’ll add that to my tattoo.”

After Mark first revealed his tattoo in February, he was interviewed by Liverpool Echo, the city’s daily newspaper, from where his story quickly spread nationally.

Mark says he has received some stick for his tattoo, but wants to convert people’s responses into a positive one.

The grandad-of-four said: “There have been some, let’s say, distasteful remarks made online. But you take the rough with the smooth and I’m a pretty laid back guy.

He added: “My message to anyone reading is, if my tattoo makes you laugh, donate a pound to the NHS.”

One of Mark’s friends tattooed the £100 body art for free at Oscar Jack’s Tattoo Parlour in Shoreham-by-Sea.

Mark decided to get tattooed after hearing a quip from comic and avid Liverpool fan John Bishop during a live BT sport broadcast.

The superfan, who was watching the broadcast in person, said: “As a joke, John said: ‘I’ve had the tattoo booked in for 30 years.’ The penny dropped.

“After the programme I told John he had given me an idea. He said: ‘Really? It was only a joke.’ Who knows maybe he has a similar tattoo but is hiding it? I hope he has seen mine.”

Mark, who works at a printing shop in Brighton, suspects he is not the only fan with a tattoo preempting his beloved team’s victory.

Jokingly, he said: “There are others out there. But have they got the balls to come out?

“I’m not the only one. If you are out there and you have got a tattoo for Liverpool winning the league, grow some nuts. If you don’t, there’s no respect.”

Mark, of Lancing, West Sussex, hopes the Premier League will eventually re-start and the team he has supported all his life will be crowned champions.

He said: “Liverpool fans are pretty optimistic people. Eventually we will become league champions, and I think 90 per cent of fans know that.

“They can’t cancel the league because it would break smaller clubs like Brighton if they have to pay Sky and BT for incomplete television contracts.”

Mark said he was concerned about how the Coronavirus pandemic is affecting the nation’s morale.

To get the country “off its knees” he is now suggesting that matches be played without audiences at select major grounds including Anfield, Old Trafford and the Etihad Stadium.

He added: “Football can be a great healer and bring the country back together.

“We are getting so much rubbish about corona on social media, let’s open it up and have a bit of banter about football.

“Everyone needs to stay safe. I get that, and we need to support our doctors and nurses as much as we can.

“But we need to get this country off its knees and back where we belong.”

Liverpool, Manchester City, Manchester United, Tottenham, and Wolves have all been handed fines by UEFA relating to incidents in their most recent European outings.

Liverpool have been fined 3,250 euros (£2,881) for the setting off of fireworks ahead of their Champions League clash against Atletico Madrid at Anfield on March 11.

Liverpool lost the match 3-2, bringing an end to their defence of the European Cup as they went out 4-2 on aggregate.

UEFA also announced that Atletico had been fined 24,000 euros (£21,285) for the blocking of public passageways in the reverse fixture at the Wanda Metropolitano on February 18.

Manchester City, who have outstanding business with Europe’s governing body as they appeal against a two-year ban from European competition for breaches of Financial Fair Play regulations, have been fined 3,000 euros (£2,657) for a kit infringement in their match at Real Madrid on February 26.

City won the match 2-1 but are yet to play the second leg of the tie due to the coronavirus outbreak.

Rivals United have been fined 12,000 euros (£10,643) for the blocking of public passageways during their Europa League match against Club Brugge on February 27, a match United won 5-0.