Fewer than 10,000 daily tests are currently being carried out across the UK, compared to around 70,000 in Germany. 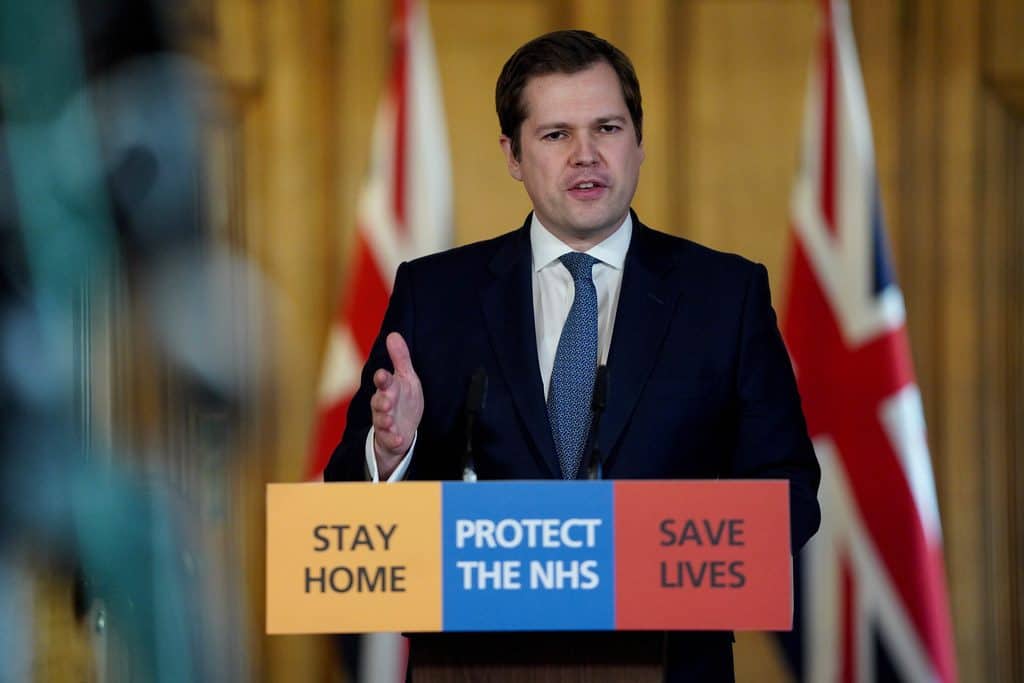 The Government is coming under increasing pressure over Covid-19 tests as healthcare leaders warned there is “no immediate prospect” of mass NHS staff testing.

Chris Hopson, the chief executive of NHS Providers, which represents NHS trusts, said maximum testing capacity in the UK was currently “very constrained” at around 13,000 tests per day.

At present, the focus is on testing patients in hospital to see if they have coronavirus, with NHS trusts told earlier in the week they should use up to 15 per cent of any spare testing capacity for NHS staff.

Health Secretary Matt Hancock has now scrapped that cap, telling NHS hospital labs to use all spare capacity to test their frontline workers.

It comes as Housing and Communities Secretary Robert Jenrick admitted on Wednesday that just 900 NHS staff were tested over the weekend as staff testing is rolled out.

He told Radio 4’s Today programme: “Clearly that’s a low number but one we want to build on significantly.

“So we should now have the growing capacity to test NHS staff in addition to the patients in critical care.”

Mr Jenrick denied the Government and Public Health England (PHE) would only agree to centralised testing after claims from scientists and universities that their offers of help have been rejected.

He said the Government was willing to “work with any provider” who had the “right infrastructure and skills” and urged them to get in touch.

The minister also said he expects there to be 25,000 tests per day by the “middle of April”.

“Everything is being brought forward as quickly as it possibly can”

Asked when the national coronavirus testing centre near Milton Keynes would be fully operational, Mr Jenrick replied: “I don’t know precisely when that’s going to be coming on board.

“Everything is being brought forward as quickly as it possibly can.”

The promise of 25,000 tests per day by mid-April is in stark contrast to comments made by NHS medical director Professor Stephen Powis last Wednesday who said there would be “hundreds of thousands of tests” per day within the next few weeks.

Asked on LBC radio if the kit was in place, Prof Powis said: “We are getting the kit… you heard me correctly, we need to get to hundreds of thousands of tests a day, and we will do that over the course of the next few weeks.”

On Tuesday, Cabinet minister Michael Gove acknowledged at the daily Number 10 news conference that the Government needed to go “further, faster” on testing.

But he warned that a shortage of the chemical reagents needed for the tests was proving to be a “critical constraint” on the Government’s ability to ramp up capacity.

Currently about 8,000 tests a day are being carried out, despite ministers having previously claimed to have met a target of 10,000 a day.

Mr Hopson said on Twitter on Wednesday that if existing NHS pathology labs “had unlimited swabs and reagent, there would be enough test machine capacity to process around 100,000 tests a day”.

He added: “It’s important to understand the constraints. Recognise view of chemical industry but trust leaders tell us major shortages of swabs and chemicals/reagents needed to complete tests. There is a global shortage. But everyone is doing everything they can to maximise supply.”

He said a small sample of tests from NHS staff over the weekend showed very few were positive for coronavirus, and the majority could go back to work.

NHS staff have expressed frustration that they are being forced to self-isolate just as they are most needed, because tests are not available to show whether they are clear of the disease.

Mr Hopson said of the weekend data: “Only around 15% of those in 14 day isolation tested positive so other 85% could come back to work. If anything like right, a huge opportunity.

“However, before getting carried away, remember testing capacity is still v constrained (currently 13k/day) and there are 1.2 million NHS staff. So no immediate prospect of mass staff testing.”

Public Health England (PHE) has also come under fire over wider testing of members of the public with Covid-19.

PHE has said repeatedly that most adults in good health who develop symptoms will fully recover and do not need to be tested.

However, many scientists disagree and say it is only through widespread testing that the UK will be able to emerge from lockdown.

He said: “By mass testing, we can detect new outbreaks and there will be much less disruption rather than isolating the whole economy.

“We have 44 molecular virology labs in the UK. If they were doing 400 tests a day, we would be up to Germany levels of testing (around 70,000 a day) and that is perfectly feasible.”

Conservative former health secretary Jeremy Hunt said it was “very worrying” that the Government was not pursuing a policy of mass testing.

“However difficult it is to source the reagents to ramp up the capacity of laboratories up and down the country, it is essential that mass community testing is part of our national strategy,” he said.

It comes as 13-year-old Ismail Mohamed Abdulwahab became the youngest victim of Covid-19 in England.

He died at King’s College Hospital in London and his family said to their knowledge he did not have any underlying health conditions.