"Quite honestly, there could be a war going on outside, and you'd barely notice it. Bliss!" 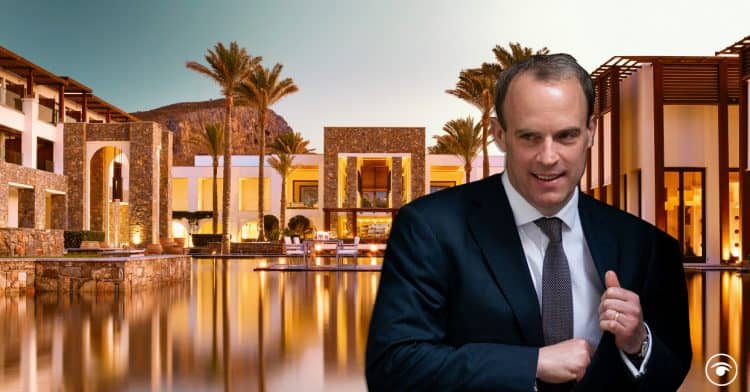 Hilarious TripAdvisor reviews of Dominic Raab’s hotel in Crete have been doing the rounds on social media.

The luxury Greek resort played host to the foreign secretary as the situation in Afghanistan deteriorated, resulting in calls for him to resign his position.

The Amirandes Hotel boasts its own private beach and ‘one of the biggest pools you’ll ever see,’ according to its website.

It fails to mention, however, that the sea can close to visitors from time to time.

The boutique hotel has been hit by a slew of spoof TripAdvisor reviews – since deleted – after the foreign secretary got into hot water at home over his handling of the international crisis.

One troll, who amusingly gave their name as Dom R, gave the plush Amirandes Hotel a five-star rating, before writing: “I hadn’t quite understood the full extent of getting away from it all until now.

“Quite honestly, there could be a war going on outside, and you’d barely notice it. Bliss!

“P.S Terrible mobile signal on the beach but suited me just fine.”

Hilariously, the hotel’s general manager Vassilis Minadakis appears to have been duped by the bogus review.

He replied: “Dear Dom, Thank you very much for taking the time to write us a review about your recent stay on TripAdvisor. We are very happy to read that you enjoyed your time with us in order for you to relax and escape from everyday life.

“We hope to welcome you again soon in our resort and wish you a nice remaining summer.”

“Too busy working to relax”

“Far from being able to relax and enjoy the amenities of this excellent hotel I was stuck in my room on the phone 24/7 coordinating evacuation efforts required by a major unfolding international crisis.

“Some uncharitable people have been saying I was lounging on the beach as the situation rapidly deteriorated.

“Nothing could be further from the truth. The fact is I suddenly remembered I had left my water wings on the beach after my regular 6am swim before starting work and merely rushed down to retrieve them.

“My friend Boris will back me up on this.”

“He is a busy foreign secretary of an independent island nation with a great history and, according to him, a great future.

“He was planning to relax and take things easy but got completely overwhelmed by the NATO evacuations from Afghanistan which he was completely taken by surprise despite being the foreign secretary of a NATO member.

“Nevertheless, Dom’s stay was excellent. He was rarely distracted or disturbed and he had time to completely download from work.

Related: Pasties off the menu as Greggs becomes latest chain to be hit by supply chain issues