“Alliances are very easy” said Trump when asked why anyone would want to be a US ally now. Erdogan warned critics not to call the operation against Kurds in Syria an invasion and threatened to flood Europe with Syrian refugees. 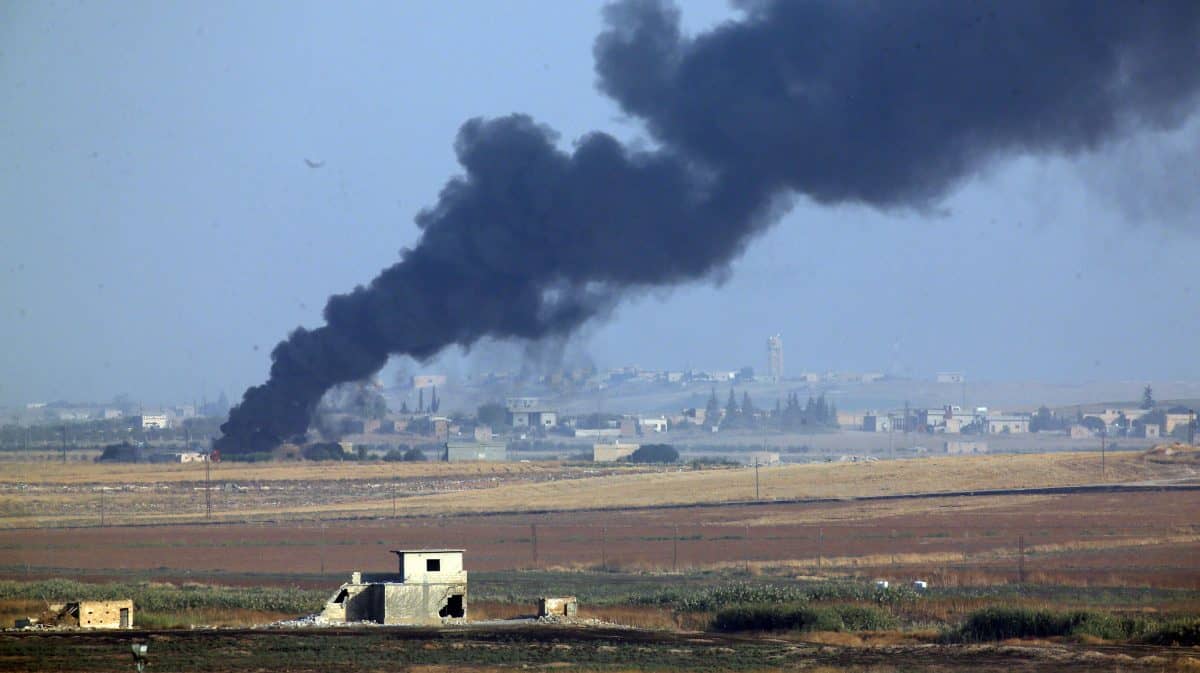 Turkish assault on Kurds in Syria

Turkish ground forces have pressed their advance against Kurdish fighters in northern Syria, launching air strikes and unleashing artillery shelling on Syrian towns and villages the length of its border.

The Turkish invasion, now in its second day, has been widely condemned around the world. The Kurds are the only US ally against the so-called Islamic State (IS), who they have fought a costly war against in Syria.

Turkish forces that want to clear Kurdish fighters they consider terrorists from an area in North Syria.

Syria’s Kurds have accused the US of turning its back on commitments to its allies and overturning years of achievements in the battle against IS.

Kurds warn the towns being attacked now contain prisons where they have kept IS terrorists and they will have to abandon fighting IS to defend themselves against a significantly technically superior and better funded Turkish military.

In northern Syria, residents of the border areas scrambled in panic as they tried to get out on foot, in cars and with rickshaws piled with mattresses and a few belongings.

It was a familiar scenario for many traumatised civilians who, only a few years ago, had fled the advances on their towns and villages by IS.

US troops pulled back from the area, paving the way for Turkey’s assault on Syrian Kurdish forces. Expectations of an invasion increased after US President Donald Trump’s abrupt decision on Sunday to essentially abandon the Syrian Kurdish fighters, leaving them vulnerable to a Turkish offensive.

“They are the worst of the worst!

After much condemnation at home and abroad, Donald Trump hit back with a series of contradictory, bizarre and badly spelled tweets.

But as well-armed Turkish troops flooded across the border towards the raggedy allies of the US in the bloody war against IS, Trump came up with his most bizarre pronouncement yet on the situation.

Not to question the President’s knowledge of History or Geography, but Kurdistan, on the border of Iraq, Syria and Turkey, is roughly 4,000 kilometres (2,500 miles) from Normandy, France.

Also Kurds did indeed help the allies in WWII crucially drawing German troops to other battlefronts.

And when asked by reporters whether he felt the Syria retreat and treatment of the Kurds sent a poor message to other potential US allies, Trump brushed the concerns off, responding: “Alliances are very easy.”

Trump’s comments understandably provoked outrage, with many remembering their brave contributions in both World War II and the current fight against IS. Others contrasted the Kurds’ military sacrifices with the President’s war record, famously dodging military service because of bone spurs in his feet.

The Kurds, who have been America’s only allies in Syria fighting IS, on Thursday stopped all their operations against the IS extremists in order to focus on fighting advancing Turkish troops, Kurdish and US officials said.

Turkey began its offensive in northern Syria on Wednesday against Kurdish fighters with air strikes and artillery shelling, before ground troops began crossing the border later in the day.

Last week, a spokesman for the US-backed predominantly Kurdish force that fought IS invited Mr Trump to come see the progress the force and the US made in north-eastern Syria.

“We have more work to do to keep ISIS from coming back & make our accomplishments permanent. If America leaves, all will be erased,” he tweeted.

“If America leaves, all will be erased”

The Kurdish-led fighters have been the main US-backed force in Syria in the fight against IS and in March, the group captured the last sliver of land held by the extremists, marking the end of the so-called caliphate that was declared by IS’s leader Abu Bakr al-Baghdadi in 2014.

“We will not hesitate for a moment in defending our people” against Turkish troops, the Syrian Kurdish force said, adding that it has lost 11,000 fighters in the war against IS in Syria.

It said IS sleeper cells are already plotting to break free some 12,000 militants detained by Syrian Kurdish fighters in north-eastern Syria.

The Kurdish fighters also control the al-Hol camp, home to more than 70,000 people, including at least 9,000 foreigners, mostly wives and children of IS fighters.

Turkey, which considers Kurdish fighters in Syria terrorists and links them to a decades-old insurgency in Turkey, has already launched two major incursions into northern Syria over the past years.

The first was in 2016, when Turkey and Syrian opposition fighters it backs attacked areas held by the IS group west of the Euphrates River.

Last year Turkey launched an attack on the Syrian Kurdish enclave of Afrin, leading to the displacement of some 300,000 people.

The Turkish Defence Ministry statement on Thursday did not provide further details on the offensive but shared a brief video of commandos in action.

The ministry said Turkish jets and artillery had struck 181 targets east of the Euphrates River in Syria since the incursion started.

The Britain-based Syrian Observatory for Human Rights, a war monitor that has activists throughout the country, said Turkish troops tried to push ahead on several fronts under the cover of air strikes and artillery shelling but made no tangible progress.

The observatory said that since Turkey began its operation, seven civilians have been killed. Turkish authorities claim to have killed 109 “terrorists.“

Turkey said it intends to create a “safe zone” that would push the Kurdish militia away from its border to house up to two million Syrian refugees in the area.

Mr Trump’s decision to have American troops step aside in north-eastern Syria was a major shift in US policy and drew opposition from all sides at home.

‘Kurds fought with us and died with us, America would never forget.’

It also marked a stark change in rhetoric by Mr Trump, who during a press conference in New York last year vowed to stand by the Kurds, who have been America’s only allies in Syria fighting IS.

Mr Trump said at the time that the Kurds “fought with us” and “died with us”, and insisted that America would never forget.

Turkey’s campaign – in which the Nato member rained down bombs on an area where hundreds of US troops had been stationed – drew immediate criticism and calls for restraint from Europe.

Australia expressed concerns the Turkish incursion could galvanise a resurgence of IS and refused to endorse close ally the US for pulling back its troops from the area.

Prime Minister Scott Morrison said he had been in contact with the Turkish and US governments overnight and admitted to being worried about the situation.

In Washington, officials said that two British militants believed to be part of an IS cell that beheaded hostages had been moved out of a detention centre in Syria and were in US custody.

The two, El Shafee Elsheikh and Alexanda Amon Kotey, along with other British jihadis allegedly made up the IS cell nicknamed “The Beatles” by surviving captives because of their English accents.

In 2014 and 2015, the militants held more than 20 Western hostages in Syria and tortured many of them.

The group beheaded seven American, British and Japanese journalists and aid workers and a group of Syrian soldiers, boasting of the butchery in videos released to the world.

Turkish President Recep Tayyip Erdogan has said 109 “terrorists” have been killed since Ankara launched an offensive into Syria.

He also warned the EU not to call the operation an “invasion”, and renewed his threat to let Syrian refugees flood Europe.

He hit out after Finnish Prime Minister Antti Rinne, whose country currently holds the European Union’s rotating presidency, condemned the offensive and urged the cessation of hostilities.

Mr Erdogan was speaking to his ruling party officials, and stressed the need for Turkey to prevent the creation of a “terror state” along its border with Syria.

But reports on the ground did not indicate anything remotely close to such a large number of casualties.

Turkish forces began a ground offensive against Kurdish fighters in northern Syria on Wednesday under the cover of air strikes and artillery shelling.

Earlier on Thursday, Turkey’s state-run news agency Anadolu said Turkey-allied Syrian opposition fighters had “cleared of terror” two villages across the border in Syria – meaning there are no more Syrian Kurdish fighters in those areas.

Major Youssef Hammoud, a spokesman for Turkey-backed Syrian rebels, had earlier tweeted they were in Yabisa, near the town of Tal Abyad, describing it as “the first village to win freedom”.