Qaim and Boukamal were controlled by the so-called Islamic State group until 2017, when Syrian and Iraqi troops captured the towns from the extremist. 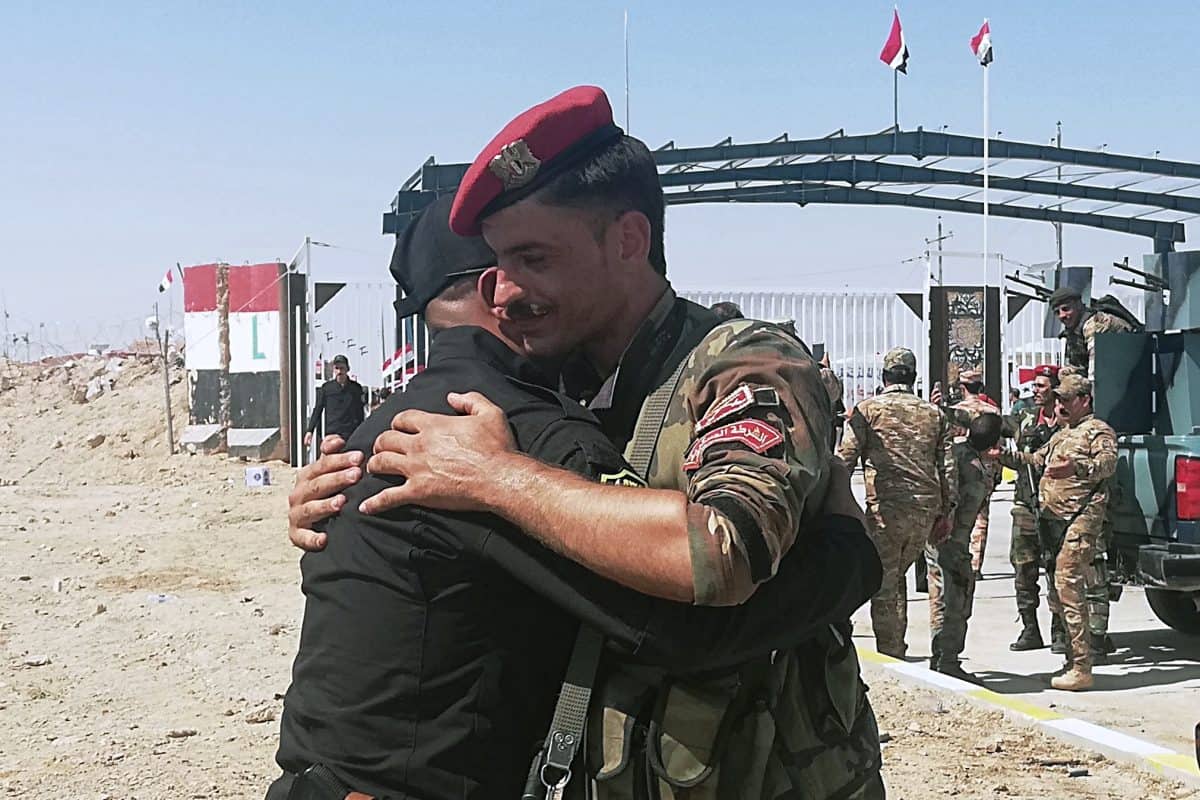 Soldiers from Iraq and Syria hugged each other and took selfies as a key border crossing between the two neighbouring countries re-opened after seven years.

The crossing linking the Iraqi town of Qaim and Syria’s Boukamal was closed during Syria’s civil war and the battle against the so-called Islamic State group.

In a symbolic gesture, Syrian interior minister Major General Mohammed Khaled Rahmoun, accompanied by Syrian troops, crossed onto the Iraqi side of the border, where troops embraced.

A victory for Syrian and Iraqi friendship against takfiri terrorism

Qaim and Boukamal were controlled by the so-called Islamic State group until 2017, when Syrian and Iraqi troops captured the towns from the extremist.

The group’s territorial defeat was announced in Syria earlier this year.

Iraqi authorities had set up tents for Monday’s ceremony amid tight security, with troops deployed around the crossing.

Despite their official defeat, sleeper cells with the militant group are still blamed for deadly attacks on both sides of the border.

“The opening of Boukamal-Qaim crossing is a victory for Syrian and Iraqi friendship against takfiri terrorism,” read a banner placed on the Syrian side of the border, a reference to the extremist ideology of the IS.

Some 800 freight lorries were expected to cross from Syria once the crossing has been opened, Syria’s state news agency said.

Qaim was once a thriving stopover on the highway linking Damascus and Baghdad.

Long before a hard border materialised in the latter half of the 20th century, tribes sent their grooms and brides across the frontier to marry, extending the branches of their families on both sides.

The opening of the crossing was postponed several times in recent weeks.

Earlier in September, Syria blamed Israel for a nighttime airstrike on an arms depot and posts of Iranian-backed militias in Boukamal that opposition activist said killed at least 18 fighters.

Israel considers Iran to be its greatest enemy, and as Syria’s civil war winds down, it has repeatedly warned that it will not allow Iranian troops, who have been fighting alongside Syrian President Bashar Assad’s forces, to maintain a permanent presence in postwar Syria.

Syria and Iraq have three key border crossings between them, with Boukamal the only one controlled by the Assad government.

The second one is controlled by US-backed Kurdish-led fighters known as the Syrian Democratic Forces, while the third crossing, the nearby Tanf, is held by US-backed Syrian rebels.

As Gove ‘enthusiastically’ backs Boris, flashback to when he knifed him in 2016