“We won a victory so big that you can see it from the moon, and you can certainly see it from Brussels,” the Hungarian prime minister said. 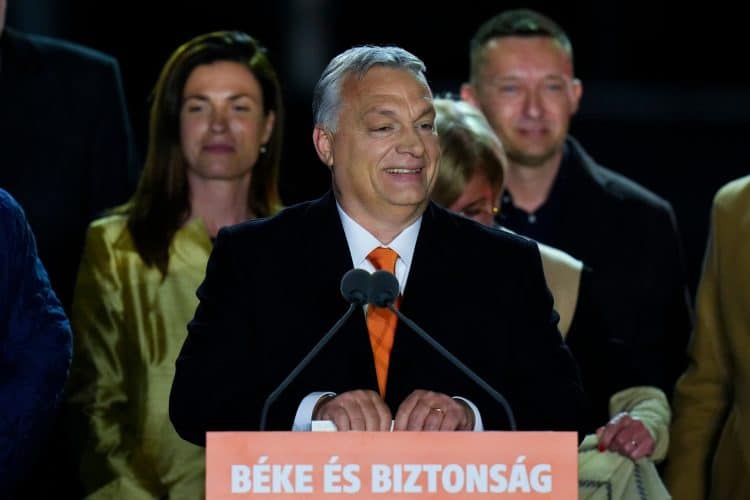 His right-wing Fidesz party had 53.1 per cent of votes with 98 per cent counted, preliminary results revealed.

In an incendiary victory speech, Orban lashed out at the European Union and Ukraine’s President Volodymyr Zelensky, branding them “opponents”.

Zelensky has repeatedly criticised Urban’s ban on the transfer of arms to Ukraine, with which it shares a border.

But Orban, who has close ties with Vladimir Putin, has condemned Russia’s invasion – and taken in half a million refugees since the war began in February.

“We never had so many opponents,” he reportedly said. “Brussels bureaucrats… the international mainstream media, and the Ukrainian president.”

Orban added that his “huge victory” could be seen “from the Moon, but certainly from Brussels as well”.

While votes were still being tallied, it appeared clear that the question was not whether Fidesz would win the election but by how much.

“The whole world has seen tonight in Budapest that Christian democratic politics, conservative civic politics and patriotic politics have won. We are telling Europe that this is not the past, this is the future,” Orban said.

It appeared possible that Fidesz would win another constitutional majority, allowing it to keep making deep changes to the central European nation.

As Fidesz party officials gathered at an election night event on the Danube river in Budapest, state secretary Zoltan Kovacs pointed to the participation of so many parties in the election as a testament to the strength of Hungary’s democracy.

“We have heard a lot of nonsense recently about whether there is democracy in Hungary,” Kovacs said. “Hungarian democracy in the last 12 years has not weakened, but been strengthened.”

‘Point of no return’

The contest was expected to be the closest since Orban took power in 2010, thanks to Hungary’s six main opposition parties putting aside their ideological differences to form a united front against Fidesz. Voters were electing lawmakers to the country’s 199-seat parliament.

In a surprise performance, radical right-wing party Our Homeland Movement appeared to have garnered more than six per cent of the vote, exceeding the five per cent threshold needed to gain seats in parliament.

Edit Zgut, a political scientist at the Polish Academy of Sciences in Warsaw, predicted that what appeared to be a clear victory for Orban would allow him to move further in an autocratic direction, sidelining dissidents and capturing new areas of the economy.

“Hungary seems to have reached a point of no return,” she said. “The key lesson is that the playing field is tilted so much that it became almost impossible to replace Fidesz in elections.”