"The facts do not support the case for cruelty." 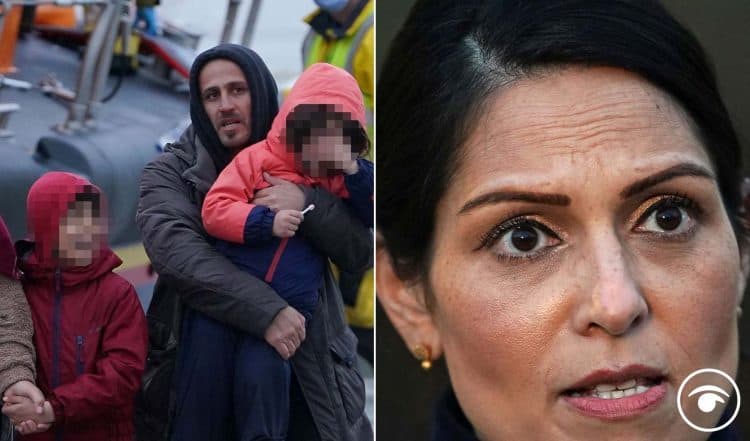 Home Secretary Priti Patel has warned that failing to increase co-operation with Europe could cause “even worse scenes” in the Channel this winter than the capsizing that killed 27 people. However, a speech by Lord Kerr dismantled Patel’s migrant policy.

She vowed to “continue to push” for improvement next week, despite being disinvited by the French from a meeting of European colleagues to tackle the migration crisis.

Interior ministers from France, the Netherlands, Belgium and the European Commission are to meet in Calais on Sunday to discuss small boat crossings.

Ms Patel’s invitation was withdrawn after Prime Minister Boris Johnson angered Emmanuel Macron by publicly sharing a letter he had written to the French president on how to deal with the issue.

However, Lord Kerr of Kenlochard discussed his thoughts on the migrant issue in the House of Lords just hours after it was reported that 27 people had died, crossing the Channel.

“I would just like to contribute three sets of facts,” the crossbench peer said. “First, overall refugee numbers [are] currently running at about half of where they were 20 years ago.

He then moved on to small boat numbers, which he conceded were up, “partly” because of “the fences, the patrols [and] the heat sensors around the train tracks and marshalling yards” driving people towards “the even more dangerous sea route”.

“But the principal reason why clandestine numbers are up, is that official resettlement routes are shut,” he added. “Our schemes, in practice, no longer exist.

Kerr then said the largest group crossing the channel in the past 18 months were Iranians, with 3,187 citizens making the journey.

In the same period, he said, only one entered the UK through the official route.

“How many came from Yemen in these 18 months? Yemen, riven by civil war and famine. None – by the official route – not one.”

He then pulled up Patel’s comments that migrants in boats are not genuine asylum seekers.

Patel told peers: “In the last year, 70 per cent of individuals on small boats are single men who are effectively economic migrants. They are not genuine asylum seekers.”

“That is plainly not true,” Lord Kerr said 61 per cent are granted it “at the initial stage” and 59 per cent receive it on appeal, he said.

“The facts suggest that well over 70 per cent of asylum seekers coming across the channel in small boats are genuine asylum seekers, not economic migrants.

“That is hardly surprising because the top four countries they come from are Iran, Iraq, Sudan and Syria … These people are fleeing persecution and destitution, and the sea route from France is the only one open to many of them.”

He then made a stark warning to the UK Government “unless we provide a safe route” for asylum seekers, “we are complicit with the people smugglers”.

“Yes, we can condemn their case. Yes, we mourn yesterday’s dead, but that does not seem to stop us planning to break with the refugee convention.

“Our compassion is well controlled, because it does not stop us planning – in the borders Bill – to criminalise those who survive the peril of the seas, and those at Dover who try to help them.

“Of course, we can go down that road, but if we do, let’s at least be honest. Let’s be honest enough to admit that what drives us down that road is sheer political prejudice, not the facts, because the facts do not support the case for cruelty.”