Image of PM in green ‘Orville’ flightless duck suit projected on to Cardiff Castle as his vow to make Brexit a ’Titanic success’ projected on to the side of the Titanic Museum in Belfast. 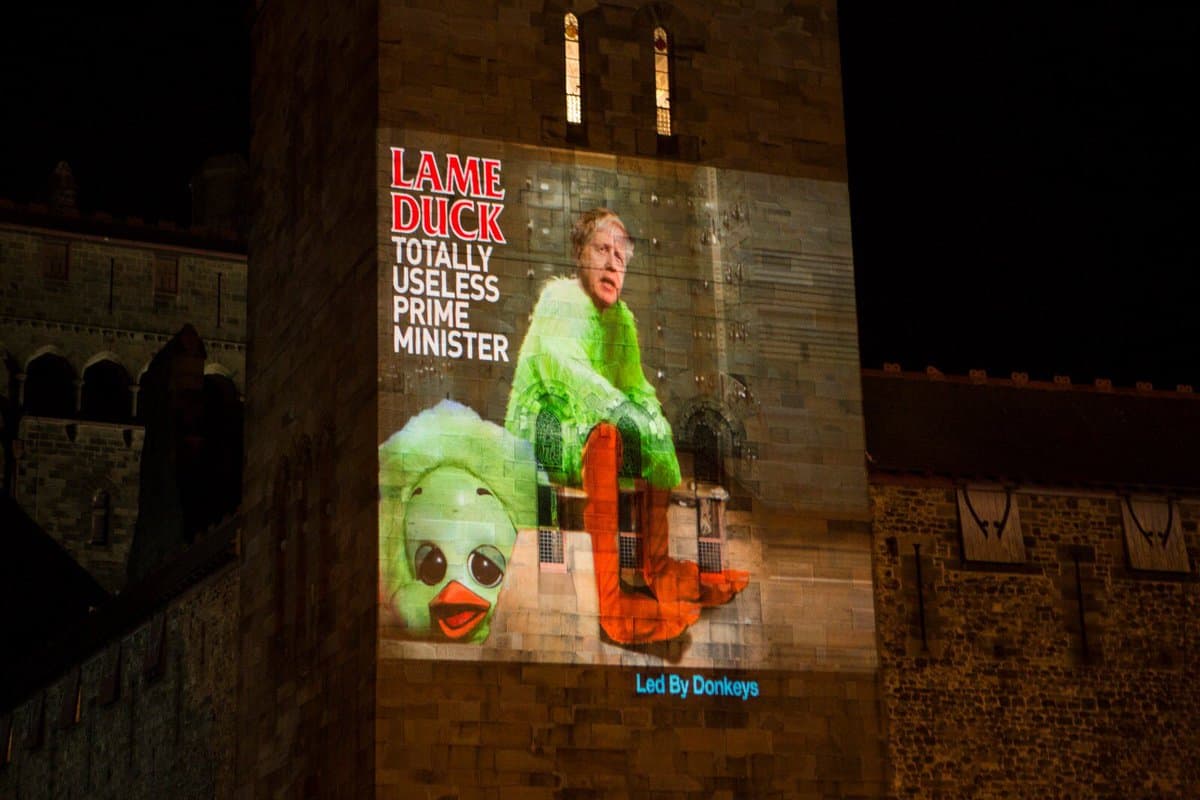 An image of Boris Johnson dressed as children’s TV’s hapless flightless green duck “Orville” was projected on to the side of Cardiff Castle, in the latest campaign by Led By Donkeys.

The image was accompanied by the words “Lame Duck. Totally useless Prime Minister.”

The image is a reference to Mr Johnson’s accusation that Labour leader Jeremy Corbyn is a “giant chlorinated chicken”.

The Conservatives have been accused of “silly playground behaviour” by members of their own party after they launched a campaign depicting Mr Corbyn as a chicken.

On Friday afternoon, the Conservatives’ Twitter account shared a doctored image of Mr Corbyn in a chicken suit, with the caption: “Hey (KFC), we’ve found an even bigger chicken than you.”

This after Boris Johnson called the Labour Party leader a “chlorinated chicken” at PMQs for wishing to wait until Britain is safe from the possibility of leaving the EU with no deal before agreeing to another general election.

Leaders of the opposition parties have said they would relish a general election but don’t trust Boris Johnson to call one now, then move the date so he does not have to ask for Brexit day to be postponed until he has secured a better deal with the EU as he has promised.

A video of the Prime Minister has also been cast on to the side of the Titanic Museum in Belfast.

In the video, a clip of Mr Johnson saying “Brexit means Brexit and we are going to make a titanic success of it” is contrasted with news clips from the last week, and footage of the Titanic sinking.

The anti-Brexit campaign group also projected a clip of Michael Gove on to the side of Cardiff Castle, in which he makes a speech about the effects of a no-deal Brexit on the farming industry.

Earlier this week, after a picture of Jacob Rees-Mogg lying down in the House of Commons went viral, they projected the image on to the side of Edinburgh Castle, with the words “Lying Tory”.

Today Mr Johnson’s suggestion he could break the law to force a no-deal Brexit could be challenged in the courts by a cross-party group of MPs.

However, Mr Johnson has repeatedly denied he would ask the EU for an extension, and said he would rather be “dead in a ditch”.

Led By Donkeys first went viral in early 2019 after organising billboards in Dover, including one showing Theresa May tweeting her support for Remain in early 2016 and another of Brexiteer Jacob Rees-Mogg in 2011 suggesting the UK could have two EU referendums.