Nigel Farage’s Brexit Party have said that they will not publish a manifesto – not until after the European Parliament elections they are standing in. – Despite being against a European Parliament. So billboard pranksters Led By Donkeys are making up for the party’s lack of policies by suggesting some based on their past statements. […] 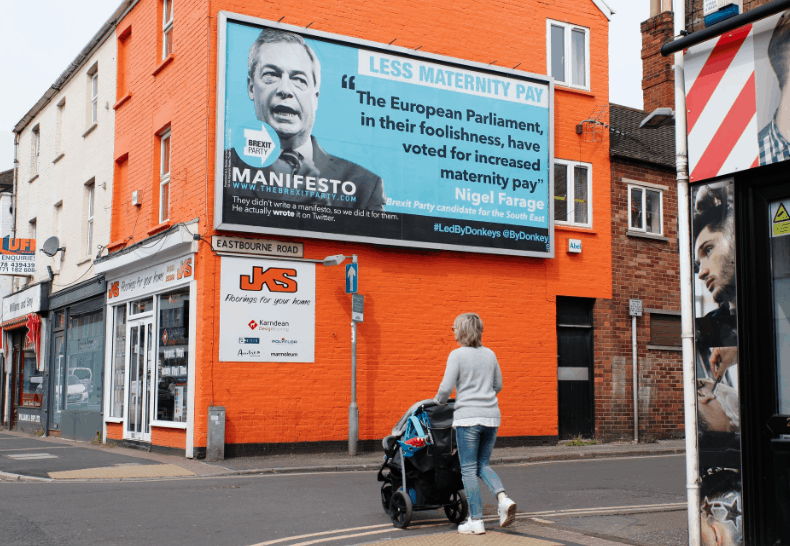 So billboard pranksters Led By Donkeys are making up for the party’s lack of policies by suggesting some based on their past statements.

In posters around the country, they have reminded Nigel Farage’s party of their unpalatable stated positions on policies.

We reported earlier this year, when pranksters Led By Donkeys launched a campaign trolling Brexiteer promoting politicians with words and promises they would definitely not want to be reminded of.

Posters were put up all over the country by Led By Donkeys, who remained tight-lipped about who they are but told The London Economic: “We feel we’re offering a public information service.

Led By Donkeys say they are “a merry band of concerned citizens” and not affiliated to or involved with any political parties.

And they are expert at trolling Nigel Farage.

Led By Donkeys swelled the ranks his underwhelming March For Brexit, and, when he bothered to turn up, trolled him with his own words- such as his support for far right US figures like Alabama senator Roy Moore, who as well as promoting racist birthing conspiracies against President Obama and having homophobic views, has been nototriously accused of sexual assault, indescretions and paedophilia by nine women.

And when Farage launched the Brexit Party he forgot to register the web domain www.theBrexitParty.com, so his nemesis, Led By Donkeys helpfully built a website for him.