A new TLE podcast looks at some of the biggest issues facing the world, and crucially, how we might fix them. 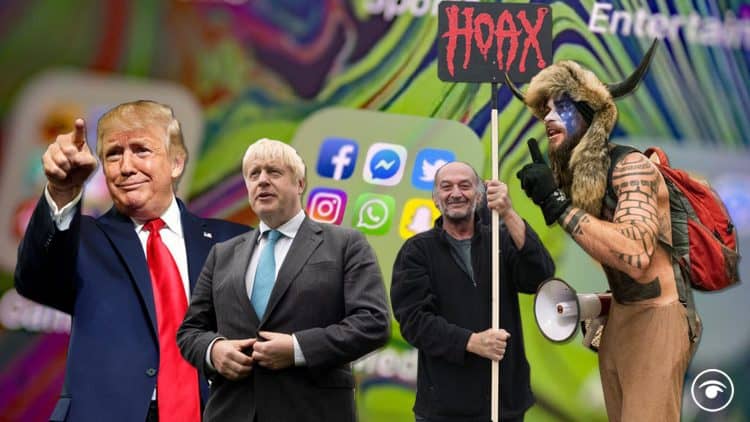 Disinformation is on the rise across the world – with devastating effects.

In January, the world watched in disbelief as protesters stormed the US Capitol, looting and occupying the chamber, the offices of House speaker Nancy Pelosi and other members of Congress.

Their indignation was fuelled by allegations that the election had been rigged against their candidate, Donald Trump, with conspiracy theories shared freely and widely – namely by the man himself.

Trump had claimed that the election “is about great voter fraud, fraud that has never been seen like this before,” in a 46-minute address posted on social media.

None of his assertions were true, but they were believed enough to underpin an insurrection.

The same could be said of beliefs held by anti-vaccine protesters who recently stormed the London headquarters of ITN and the UK’s Medicines and Healthcare products Regulatory Agency (MHRA), under the belief that the vaccines they had recommended were not fit to be used.

It is a point that Damian Collins, MP for Folkestone and Hythe and chair of the UK Parliament Joint Committee on the Draft Online Safety Bill, was keen to emphasise on the first episode of The London Economic’s new podcast: Unbreak the Planet with Mike Galsworthy.

Discussing the rise of disinformation and, crucially, what can be done about it, Collins said: “I think it’s impossible to think of the rise of the anti-vaxx movement or conspiracy networks like QAnon without social media there to amplify them.

“Part of the problem is that the social media business model is based on engagement and it tends to see all engagement as positive.

“I think sadly what we are seeing is that disinformation is good for business.”

Where does the buck stop?

So where does the buck stop?

The responsibility to curb the dangerous spread of disinformation primarily rests on the shoulders of three different players: the people who upload the spurious content, the platforms that allow them to spread it, and the regulators and politicians who can legislate against it.

But that creates a strange paradox.

It is a point that Peter Stefanovic has been at pains to point out over recent years, saying mistruths in parliament put democracy at risk.

Collins, speaking in the TLE podcast, believes politicians have a degree of jeopardy in what they say, but not everyone is convinced.

“We’ve just had Dawn Butler walk out of Parliament over Boris Johnson saying things such as ‘it’s only because of Brexit that we can have freeports’, and every fact-checker under the sun will say that is not the case,” Galsworthy said.

“So if it does not start in our Parliament with politicians then it does feel very much like one rule for them and another for everyone else.”

One thing that can be agreed is that the rise of disinformation will not be quelled overnight.

As part of theUnbreak The Planet series, we will be looking at not only the problems but also potential ways of solving them, which can be broke down into three parts in this instance.

1 – Establish a regulator nationally and globally

2 – Grant regulators the legal power to audit and inspect

3 – Make perpetrators accountable to the law

Watch the first episode ofUnbreak The Planet with Mike Galsworthy below: