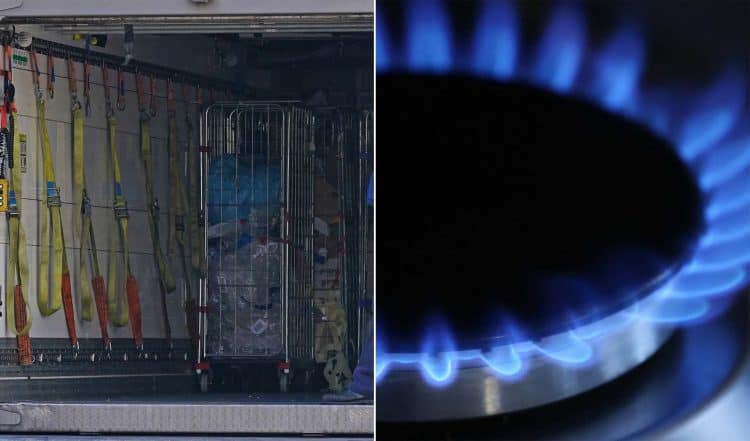 Food supply shortages could happen in the “coming days and weeks” if the carbon dioxide issue continues, a supermarket boss has warned.

Richard Walker, managing director of Iceland, said Christmas food supplies could be impacted by a reduced supply of the gas – but stressed that the damage could be felt much sooner.

“This is no longer about whether or not Christmas will be okay, it’s about keeping the wheels turning and the lights on so we can actually get to Christmas,” the supermarket executive told BBC Radio 4’s Today programme.

“This could become a problem over the coming days and weeks, so this is this is not an issue that’s months away.”

Mr Walker said the retailer has stocked up on key items and said frozen food generally is well protect from the carbon dioxide shortage.

The shortage has been driven by soaring gas prices, which resulted in two US-owned fertiliser plants – which produce 60% of the UK’s carbon dioxide – shutting down last week.

Richard Harrow, chief executive of the British Frozen Food Federation, also stressed that a shortage of dry ice would have a “minimal impact” on frozen food supplies, highlighting that some reporting over the issue has been inaccurate.

However, he stressed that the shortage was impacting upon ingredients, chilled food and adding another pressure to an already challenged food production industry.

“The CO2 shortage is already affecting primary production of many ingredients used by frozen food producers and this may lead to shortages of some frozen food supplies,” he said.

“However, chilled foods producers are much larger consumers of CO2, which is used to extend the shelf life, so chilled food supplies are likely to be hardest hit by the shortage.

“The greater concern is that the CO2 shortage will disrupt production throughout the food supply chain at a time when we are experiencing severe labour shortages and freight problems.

“These have led to major supply chain issues that are set to continue for the foreseeable future.”

“The Government must urgently ensure adequate supplies of CO2 for UK food producers,” he said.

“Disruption to CO2 supplies could not come at a worse time, with the shortfall of 90,000 HGV drivers already putting severe pressure on food production and distribution.

“Retailers are working with their suppliers to manage this issue as best they can, but it is vital that Government takes immediate action to prioritise suppliers and avoid significant disruption to food supplies.”

There is “absolutely no question of the lights going out” this winter amid escalating energy prices, the Business Secretary has said.

Kwasi Kwarteng, addressing MPs after holding crisis talks with the industry on Monday amid fears more small suppliers could go to the wall, said it was “alarmist” to suggest that people would not be able to heat their homes in the colder months, as he assured that the UK’s energy supply had “sufficient capacity” to meet demand.

Wholesale prices for gas have surged 250% since January, with a 70% rise since August alone – leading to calls for support from the industry and the collapse of some smaller energy firms.

“There is absolutely no question of the lights going out or people being unable to heat their homes. There will be no three-day working weeks or a throwback to the 1970s.

“Such thinking is alarmist, unhelpful and completely misguided.”

The UK’s sixth-largest energy company, Bulb, is seeking a bailout as a surge in wholesale gas prices threatens to cause chaos for the industry.It comes after four small energy suppliers announced they would cease trading in recent weeks amid the price surge

The energy startup, which provides electricity and gas to some 1.7 million customers, is reportedly working with financial advisory firm Lazard to help secure new sources of funding.

Options currently being explored by the firm include raising funds from investors, a potential joint venture or a merger with another company, according to the Financial Times.