Labour said Tory accusations that their as yet unpublished manifesto would cost £1.2 trillion is ‘fake news.' 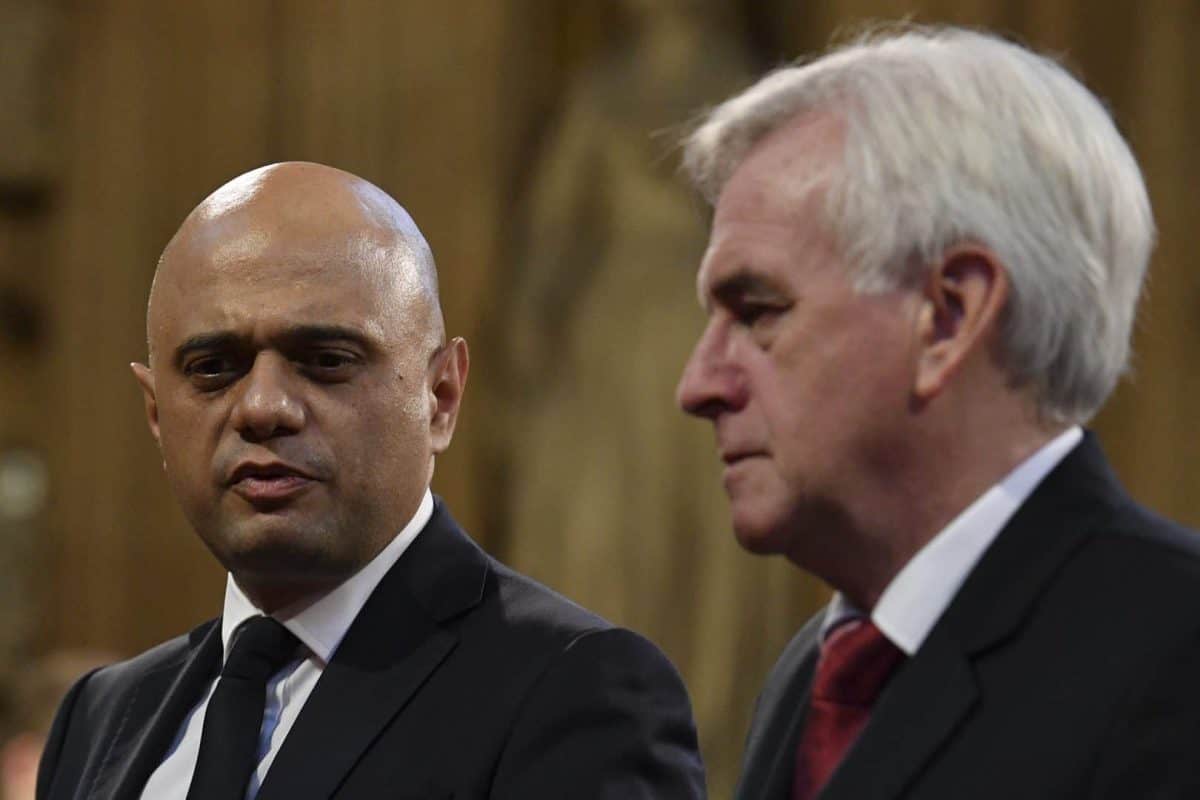 A Channel 4 election debate on the economy has been scrapped, amid claims from the Labour Party that Chancellor Sajid Javid is “running scared”.

Labour suggested that Javid refused to take part in the debate, proposed to take place this weekend, which shadow chancellor John McDonnell had agreed to.

There was nervousness in the city as well as for the Chancellor Sajid Javid after Moody’s threat on Friday night to downgrade the UK. On Monday GDP data revealed Britain’s annual economic performance is the weakest since 2010 when it was emerging from a global financial crisis.

– All a worrying indictment of Tory fiscal policies, as analysis has revealed Boris Johnson’s Brexit deal will leave the UK £70 billion worse off.

Channel 4 said plans for the debate are “currently on hold” as it was “not possible to reach an agreement with all parties”.

Boris Johnson called the first December election since 1923 last month, but cannot afford anything else to go wrong with a campaign beset with controversies since he called the election.

The Conservatives lead in the polls has now been cut to six points with a month to go until the general election.

John McDonnell said: “Sajid Javid is running scared of debating with me and completely understandably, as the Tories are inventing silly figures which Labour would pull apart in a public debate.

“Clearly the Tories can’t even cost their own programme.

“Let me make it completely clear that the figures published by the Tories about Labour’s spending plans are fake news, and I reiterate that income tax rates under Labour won’t rise for 95% of people, and that only the top 5% would pay more.

“There will also be no VAT increases under Labour.”

A Channel 4 spokesman said: “Plans for a chancellors/economy debate are currently on hold as it was not possible to reach an agreement with all parties. If the situation does change, we would certainly explore options on how best to proceed.“

Labour said the party has been informed that the proposed 90-minute set piece on Sunday November 17 has been shelved.

Javid had promised Channel 4 News on Monday evening: “I understand that there’s discussions going on. I’m not going to pre-empt those, but it’s always good to have a robust discussion, and I’m happy to discuss with John McDonnell any time.”

Chancellor Sajid Javid defended the Conservatives’ claim that Mr Corbyn’s policies would cost £1.2 trillion, and said the Labour leader would open up a “huge black hole” in the nation’s finances.

Javid said: “Jeremy Corbyn is planning a reckless spending spree which we will all have to pay for. He will open up a huge black hole in the nation’s finances and hardworking people will be the ones that suffer.

“In order to pay for his policies, he will not only have to massively increase borrowing and debt, he will also need to hike up taxes by £2,400 per person – this is equivalent to an entire month’s pay for the average earner.“

However Shadow Treasury minister Jonathan Reynolds responded: “This is more fake news from Conservative HQ after Sajid Javid had his plan to use the civil service for party political ends scuppered.

“Labour will set out our plans and our costings fully when we release our manifesto.

“The Conservatives should spend more time looking at their own policies as they failed to produce costings at the last election and, as Kwasi Kwarteng demonstrated, have no idea about the cost of their own policies.”

At the weekend, the Chancellor said the opposition would spend an extra £650 million a day if it won the General Election, labelling the levels of spending “eye-watering”. Yet repeatedly Conservative ministers have refused to be drawn on the cost of their policies on top of Boris Johnson’s Brexit plans which economists have warned will leave the UK worse off.

Boris Johnson’s Brexit deal is set to leave the UK £70 billion worse off according to analysis by the well-respected National Institute of Economic and Social Research, with all regions set to be worse off than in Theresa May’s Brexit deal of last year.

The UK economy would be five per cent bigger under a Labour government than a Conservative government by 2022, according to Citi forecasts, just months after it was reported that major banks had warmed to the idea of Jeremy Corbyn as Prime Minister.

Labour condemned the analysis of their manifesto which has not been published yet spread by senior Tories as a “ludicrous piece of Tory fake news” and an “incompetent mish-mash of debunked estimates and bad maths”.

Javid said the proposals – which include plans to provide free adult and higher education, renationalise rail, mail, water and energy – were “absolutely reckless” and equivalent to funding the entire NHS budget for nine years.