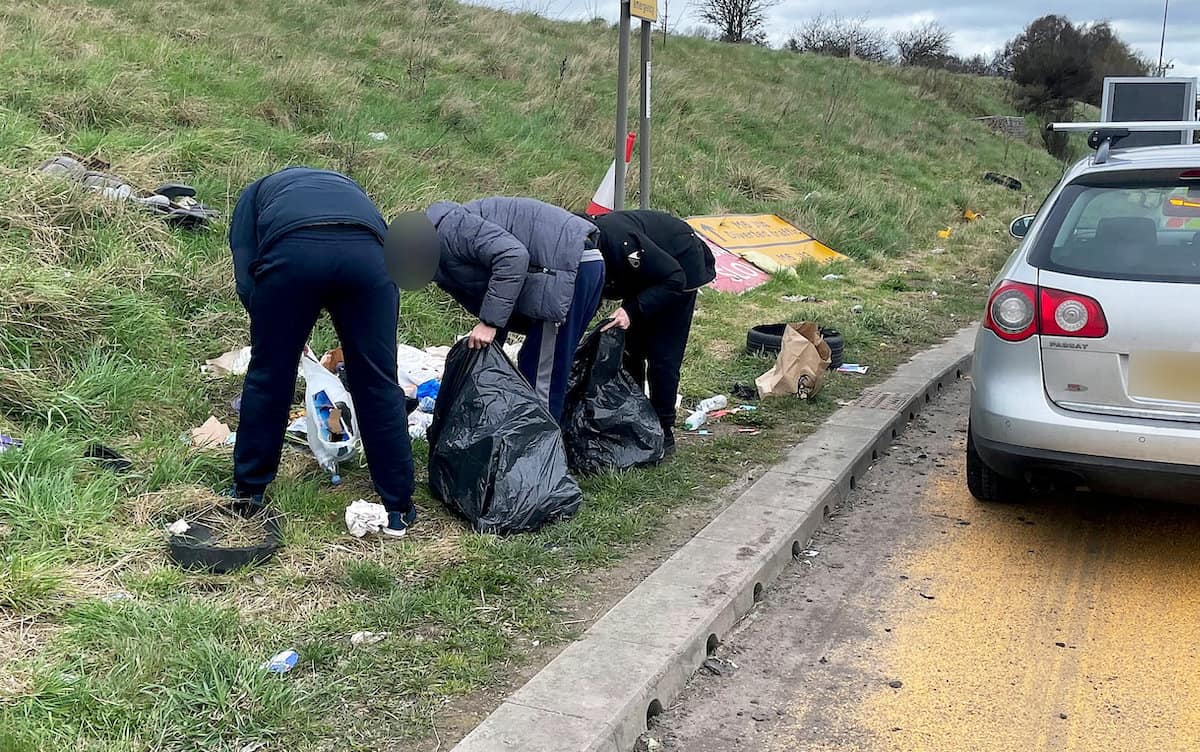 A group of fly-tippers who were caught on camera dumping rubbish on a motorway were escorted by police five miles back to their mess – and forced to pick it all up.

Traffic cops ordered three men to drive back in the direction they had just travelled so they could clear up the discarded piles of waste they left beside the M6.

Highways Agency CCTV operators spotted the trio dumping the bags of trash on a grass verge between junctions 12 and 13, in Staffordshire, on Sunday (28/3).

Central Motorway Police Group (CMPG) officers then intercepted the vehicle between junctions 14 and 15 and escorted the occupants back to the scene.

Comical pictures show the red-faced trio bending down to pick up their piles of rubbish by hand after they were shamed by officers on social media.

CMPG officers tweeted: “M6 J12 to J13 a eagle eyed @HighwaysWMIDS who was monitoring the CCTV cameras notice the occupants of a Passat dumping rubbish in a ERA bay.

“We intercepted the vehicle M6 J14 to J15 and escorted them back clear their rubbish up. Details passed to @EnvAgency”

Web users took to social media to praise the officers for delivering “instant karma” after images of the fly-tippers were posted on Twitter.

Jacqueline Weaver put: “I would love to have seen their faces when pulled over by you. Bloody fantastic work officers.”

Jim Sanbrooke commented: “Hahaha, what a bunch of tools. Got everything they deserved, I hope they were fined as well.”

Ann Williamson wrote: “Brilliant! Should have got them to pick up everyone else’s rubbish whilst they were there.”

Nick Williams added: “Absolute class guess it wasn’t a clean getaway for them.”