Tonnes of stinking rubbish dumped on an industrial scale can be seen piled up over the edge of a lay-by on a main road in Burnley, Lancs 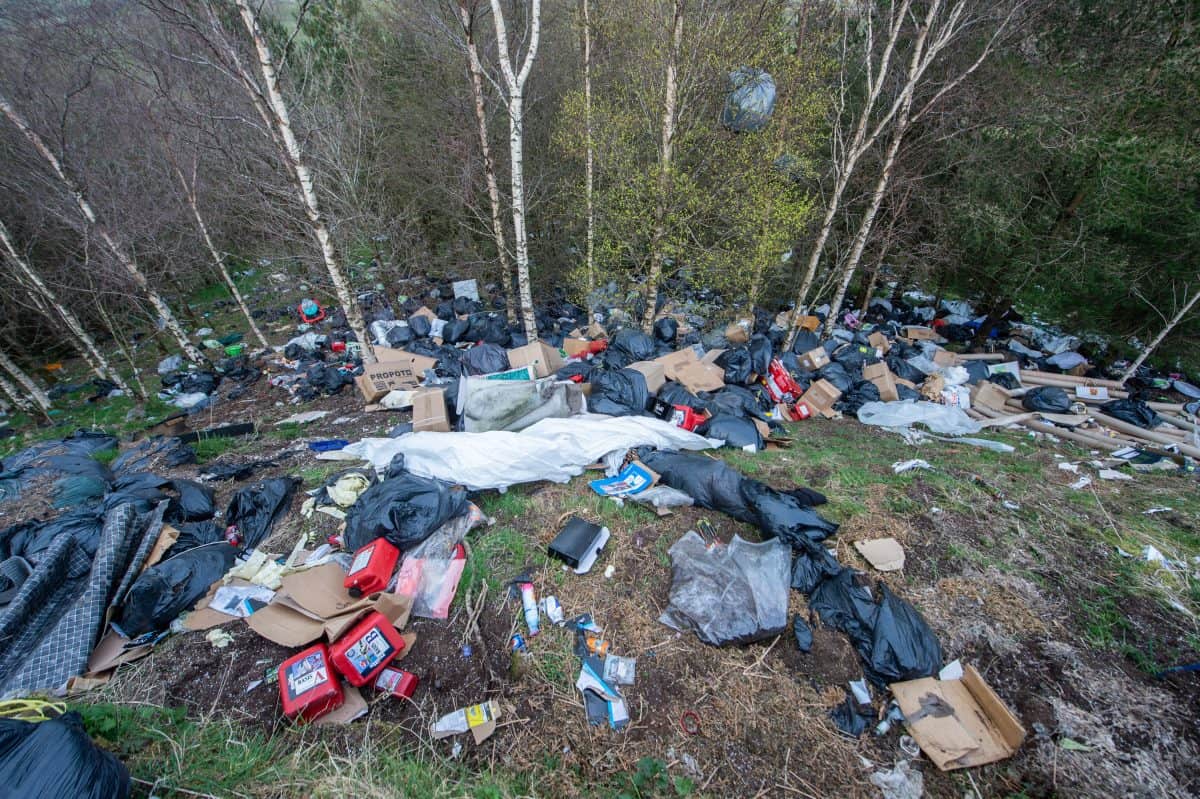 These shocking images show the horrific scale of fly tipping in one area – as waste recycling centres across the country shut down due to coronavirus.

Tonnes of stinking rubbish dumped on an “industrial scale” can be seen piled up over the edge of a lay-by near a beauty spot in Burnley, Lancs.

The closure of a majority of tips due to the coronavirus lockdown and social distancing guidelines has resulted in a spate of fly-tipping incidents in recent weeks.

In Lancashire alone 16 waste and recycling centres have shut down, including a number within a short distance of the fly-tipping hotspot shown here on the A671.

Household items such as furniture and rubbish can be seen alongside hundreds of black bin bags, cardboard boxes and even a tyre.

One bag appears to have got stuck on a tree branch as it was lobbed down the sloped bank by one culprit.

A large banner reading ‘lets scrap fly tipping’ has been hung from a railing on the edge of the lay by to ward potential offenders away.

Sarah Lee of the Countryside Alliance said: “The images of fly tipping, though horrendous, are an all too familiar sight.

“It shouldn’t need saying that driving to dump rubbish is not essential travel.

“Not only are you committing an offence by littering, but you are also ignoring guidance that has been introduced to stop the spread of this dangerous virus.”

Fly tipping is defined as the illegal dumping of items.

Anyone found guilty of doing it could face a £400 fixed penalty notice or an unlimited fine.

However, according to the Countryside Alliance, only one in 600 incidents lead to a prosecution.

Between 2018 and 2019 there were more than one million instances of fly tipping in England, with clean-ups costing between £100million and £150million.

A Burnley Council spokesman said the authority is working with Lancashire County Council and other partners to find a safe and effective way of removing this waste.

They added: “It’s beyond belief that someone could destroy our beautiful countryside without a thought or a care for the devastating impact this kind of mindless behaviour has.

“This is flytipping on an industrial scale and must have taken several trips to complete.

“There is no excuse for this selfish, criminal act. If anyone has any information on who is responsible for this outrageous act we want to hear from you so we can catch and prosecute them.”

Sarah Lee of the Countryside Alliance added: “To make serious headway, we need to understand the business of illegal waste disposal and the culture that abets it.

“Fly-tipping, as most know it, has developed over the years.

“It represents much more than just lobbing an unwanted Christmas tree, or a bag of rubbish out of a moving car at the dead of night.

“It has become a business and people up and down the country, either knowingly or out of confusion, are aiding it.”