"For many it doesn’t mean much. But this photograph says something entirely different," the district mayor said. 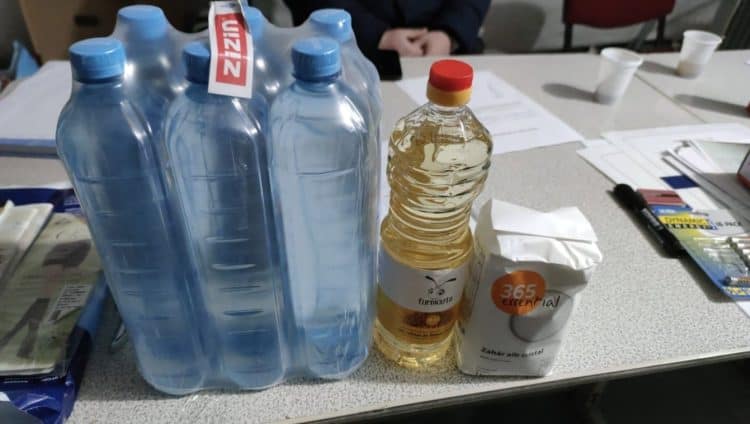 A homeless man from Romania has left people speechless after buying a water pack, a bottle of oil and a bag of sugar for Ukrainian refugees.

The man insisted to give the supplies he bought from the little he has to a donation centre in Bucharest’s first district, which came to the attention of the district mayor, Clotilde Armand.

Armand said: “A pack of water, a bottle of oil and a bag of sugar – for many it doesn’t mean much. But this photograph says something entirely different.

“The food was donated to the centre in Piata Amzei by a person without a home from the Capital. The staff at the centre didn’t want to receive the small humanitarian help and gave him the money back for the products.

“But the man vehemently refused them. He insisted to donate the food, his modest contribution to this humanitarian crisis in Ukraine.

“Here is a lesson of solidarity that I have never seen before.”

Armand said the man was subsequently taken to a local social centre for accommodation and food.

One woman said: “Sometimes those who know what trouble, loneliness, cold and hunger mean are more human than us who, just because we are lucky enough to have what we need, feel that we are somewhat more human than they are.”

One man added: “Very nice and honourable. You can find models of humanity and kindness in those who know the hardships of life.”

“Well done him, I wonder how many of us passed by him without even saying hello to him,” one person said.

Another person said this should prove a point to those who bring up a country’s own poor people as a reason to not help Ukrainian refugees. “For those who only found out now that Romania has poor people. Read this, to understand that we will always have poor people in Romania, but now we are prioritising opening our hearts and arms to those fleeing war. Look who understands the situation!”

“Maximum respect! When are parliamentarians going to make such a gesture?” someone asked, whilst someone else concluded: “He doesn’t have a wallet, but he has a good heart!”

The gesture comes as Romanians have been offering their homes and services for free to Ukrainian refugees ever since the Russian invasion started last month and people started fleeing.

The country has taken the second highest number of Ukrainian refugees – almost half a million, out of a total of around three million according to UN data.

One Romanian couple has been hosting dozens of Ukrainian refugees in their home, prompting a CNN journalist to say they restored his “faith in humans”.

Last week, a British journalist has praised Romania’s response to the Ukrainian refugee crisis after travelling to both countries, and shared an image of a national railway poster, announcing free travel on Romanian trains.