“Textbook case of a civilised and humane approach to refugees," the British writer said. 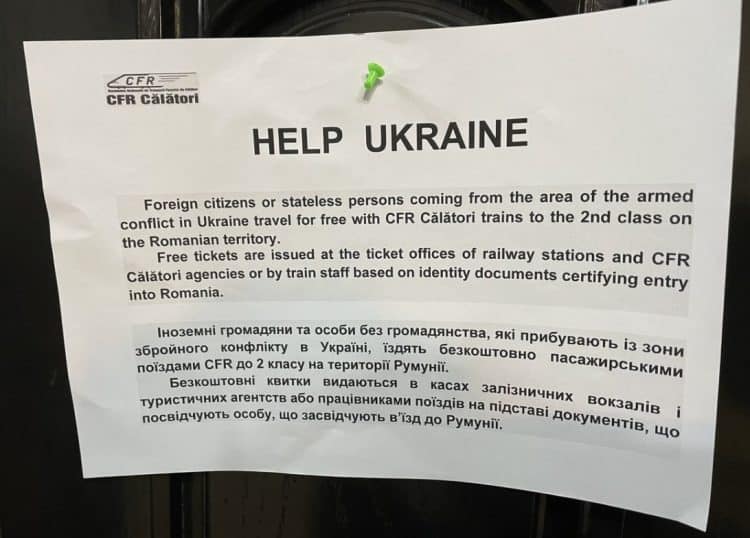 A British journalist has praised Romania’s response to the Ukrainian refugee crisis after travelling to both countries.

Shaun Walker confirmed on Tuesday, when he left Ukraine to Romania, a report by The London Economic nearly three weeks ago about Romanians overwhelmingly coming together to ease the pain of Ukrainian refugees – by even offering to host them in their own homes.

He said he found “huge queues” of over six hours in snow and wind because of the huge number of Ukrainians fleeing the war with Russia.

But he said Romanians were waiting for their neighbours with “food, hot drinks, free buses, help, volunteers, arranging of rooms”.

The poster read: “Foreign citizens or stateless persons coming from the area of the armed conflict in Ukraine travel for free with CFR Calatori trains, second class, on the Romanian territory.

“Free tickets are issues at the ticket offices of railway stations and CFR Calatori agencies or by train staff based on identity documents certifying entry into Romania.”

Walker concluded: “Textbook case of a civilised and humane approach to refugees.”

He also urged Priti Patel to have a look at a map compiled by pro-EU group Best for Britain, showing most of Europe has allowed Ukrainian refugees to enter their countries without visas – but the UK stands out as still requiring paperwork and applications.

And London City Hall civic expert Dr Elisabeth Pop said she is “so proud of the response and leading example of Romania and so ashamed of the UK Government”.

One Twitter user said: “Why can’t I be proud of my countrymen? Why can’t this be the UK? Why are we stopped from being the good people we want to be by our inhumane government?”

“On the Romanian-Ukrainian border: an overwhelmed state, and a heartwarming outpouring of civic solidarity,” another user said.

A third added: “Look at the very well-worded message there. Anyone escaping armed conflict, not just Ukrainains, as it should be.”

Romanians have been using a new Facebook group set up last month, United for Ukraine, where they have been offering free accommodation, transport, food, clothes and medicines to families with children and animals some Ukrainians have not left behind.

Moldova has also received an extraordinary amount of refugees when compared to the country’s population, with its prime minister claiming every eighth child is now a refugee.