It comes amid reports that Russia is struggling to conduct offensive operations in face of sustained Ukrainian resistance. 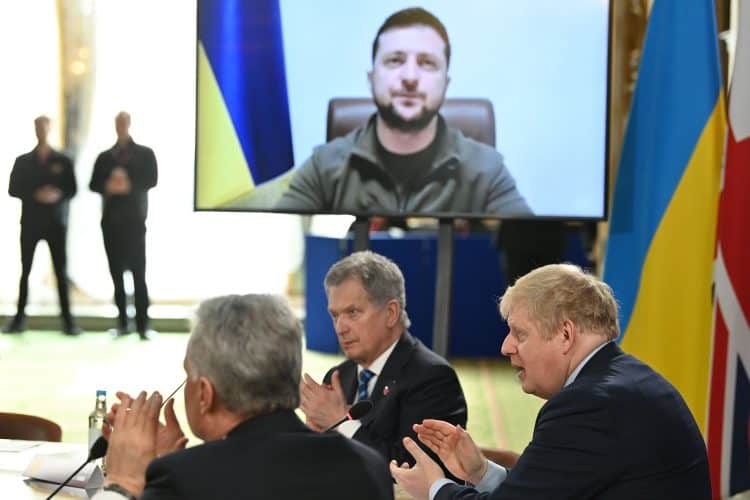 Volodymyr Zelensky has suggested peace talks between the Ukrainian and Russian delegations had started to produce hope of a ceasefire.

In his nightly video address to the nation early on Wednesday, the president said Russia’s demands were becoming “more realistic”.

The two sides were expected to speak again on Wednesday.

Ukraine’s Nato ambitions are thought to be a key concern for Putin, and there are early signs that Zelensky may be willing to concede on the matter.

Joining a video call with Boris Johnson and representatives from Baltic and northern European countries, the Ukrainian president expressed his frustration that the country had not been allowed to join Nato, but said: “This is the truth and we have simply to accept it as it is.”

Speaking to broadcasters at the Emirates Palace hotel in Abu Dhabi on Wednesday, Johnson echoed his comments, saying:

“I talked to Volodymyr (Zelensky) again yesterday and of course I understand what he is saying about Nato and the reality of the position.

“And everybody has always said – and we’ve made it clear to (Russian President Vladimir) Putin – that there is no way Ukraine is going to join Nato any time soon.”

But Mr Johnson said decisions about the future of the country had to “be for the Ukrainian people” and their “elected leader” to make, as he vowed Britain would continue to “back” Mr Zelensky.

“And the most important thing is that Putin’s aggression, his absolutely barbaric attacks on Ukraine should stop and they should not be seen to have succeeded, and they won’t succeed,” the prime minister added.

Reports on the ground suggest Russian forces are “struggling to conduct offensive operations” because of the “sustained Ukrainian resistance” they have faced since their unprovoked invasion.

Putin’s military has suffered such serious losses that Russia is “increasingly seeking to generate additional troops to bolster and replace its personnel losses in Ukraine,” the Ministry of Defence said in its latest update.

“As a result of these losses it is likely that Russia is struggling to conduct offensive operations in the face of sustained Ukrainian resistance. Continued personnel losses will also make it difficult for Russia to secure occupied territory.”