"This might actually be the dumbest protest of all time," wrote Ian Dunt. 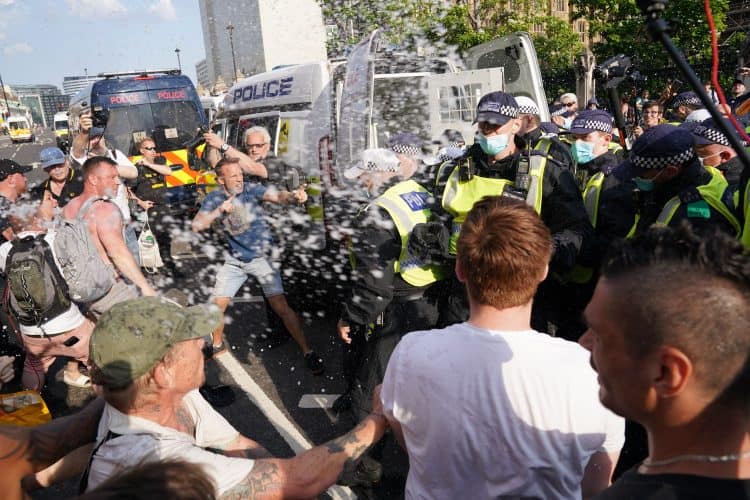 Yesterday was ‘Freedom Day’ but some people appeared to have missed the memo, with protestors descending on Westminster to demonstrate against restrictions that no longer exist.

Scotland Yard said 11 people were arrested during the anti-lockdown and anti-vaccine protest, which saw demonstrators block a road and force traffic to a standstill.

Protesters held signs and chanted “freedom” as they gathered in Parliament Square on Monday after almost all remaining coronavirus restrictions were lifted in England.

The Metropolitan Police said, shortly after 3pm on Monday, that officers continued to respond to the demonstration in central London.

In a post on Twitter yesterday, the force added: “Our policing operation continues, sadly officers have been met with hostility while engaging with crowds.”

Footage posted on social media shows some protestors clashing with officers in the middle of the road on Parliament Street near Westminster Underground station, where hundreds of demonstrators had gathered.

Bottles were thrown in the direction of officers, many of whom were wearing helmets, as scuffles broke out and demonstrators shouted abuse at police in sweltering temperatures in the capital.

As expected Gillian Mckeith and Piers Corbyn were in attendance.

The People surround Whitehall. They have had enough. Freedom needs to mean exactly that ……Freedom. And no forced or mandated jabs for anyone. Choose Truth ! #NoVaccinePassportsAnywhere #londonprotest pic.twitter.com/HQkbWwmEOL