“It’s just so upsetting. Now it’s basically all of the animals that are an issue, and I don’t know how they expect me to sort this out – how can we soundproof cows?" 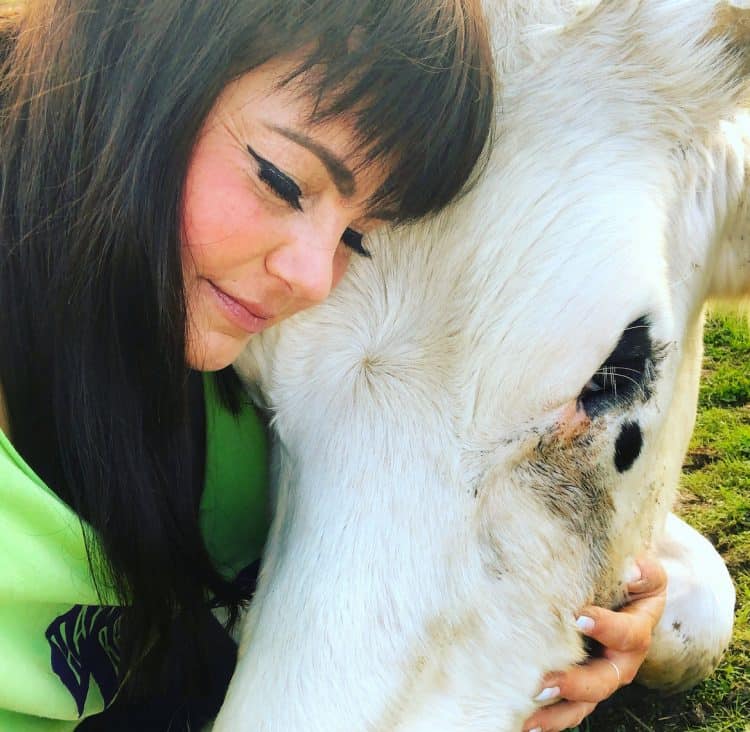 Amey James with her animals. Credit;SWNS

A sanctuary owner has been ordered by her local council to hush up her crowing and mooing farm animals in the next three months or face being prosecuted.

Amey James has been issued noise abatement orders for allowing her cows and chickens to make “an unreasonable level of noise”.

The council order specifically referred to the ranch’s 20 geese and 50 cockerels, as well as a generator on the site near Sittingbourne, Kent.

As founder of The Happy Pants Ranch, Amey was handed the first written warning back in April and told the charity faced being slapped with a fine of up to £2,500.

Now the charity has now been given 90 days to stop the noise, which also now includes sheep, cattle and dogs, or it could be prosecuted and handed an unlimited fine by Swale council.

Amey, 37, said: “It’s just so upsetting. Now it’s basically all of the animals that are an issue, and I don’t know how they expect me to sort this out – how can we soundproof cows?

“We’ll either have to leave the site or re-home the animals, it’s just awful. It all seems so wrong and I cannot believe it’s continuing.”

Amey, who lives at the ranch with her boyfriend Phil Greenhalgh, 32, said that after the written warning the charity blacked out the windows of the cockerel barns to keep them from crowing at sunrise.

They also tried to encourage the geese to use a pond further away from neighbours, and put the generator in a shed to try and soundproof it.

But as the charity has since had to apply for permission for the field that is registered for agricultural use to now be used as a sanctuary, she has not been able to make any further changes.

She added: “If you can’t keep animals here, on a 20-acre field, in the countryside, in a non-residential area, then where can you keep them?”

“For many people who visit and volunteer at the sanctuary, it’s a place of peace and harmony; that’s why those with mental health issues find it such good therapy here.”

“We wanted to rehouse the cockerels and we’d like to put a new, soundproofed shed up for the generator, but we’re not allowed to build any structures until permission is granted.”

The noise complaints came after the rescue centre – a sanctuary for 350 unwanted or abandoned animals from cows, dogs, ducks and sheep to goats, parrots, pigs and more – moved from its previous base to the new site earlier this year.

She added: “We’ve already appealed the decision; I just think it’s unfair. No evidence has been presented to us, showing what the noise nuisance is or at what times it’s happening, so we haven’t been able to assess and act on it properly.

“I also feel let down by the lack of communication from the council. That’s twice now that they’ve turned up and given me a piece of paper, but they’ve not given me any advice on how to sort this out.

“I never envisaged having trouble like this. It just makes you feel so uncomfortable as soon as one of the animals makes a noise and that’s not right. I just feel like there’s very little that I’m able to do.”

Swale council confirmed it had issued noise abatement notices on the sanctuary site as its investigations into a number of complaints determined there was a “statutory noise nuisance”.

The notices require the charity to remedy the noise from the generator within 28 days, and the daily noise from animals including cockerels, geese, sheep, cattle and dogs within 90 days or the could be hauled before the courts.

A spokesman for the authority said: “We recognise this is a sensitive matter and, as such, we have given an extended timescale for the owners to abate the animal noise nuisance.

“We will, of course, support the owners where we can but once we have determined that the noise levels were in excess of what can be reasonably expected for a given location, then we are required by law to act.

“Throughout the investigation we have offered to work with the site operator to resolve the situation, and this remains the case going forward.

“Failure to comply with the notices can lead to prosecution and magistrates can give an unlimited fine.”