"SIMPLY NOT GOOD ENOUGH. Stop “computer says no” mindset and get on and help." 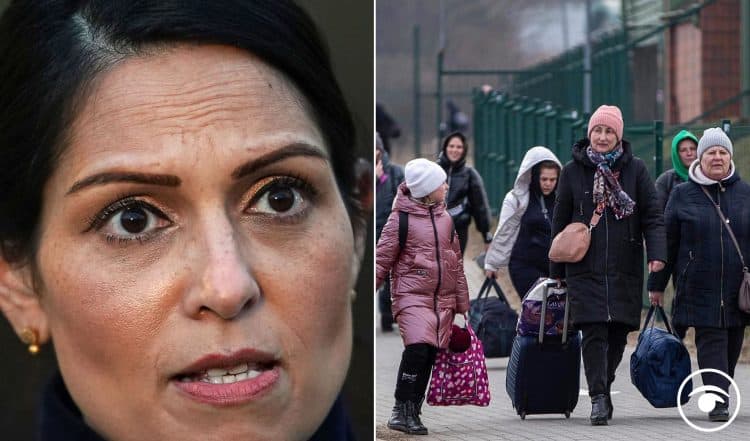 Defence officials are to help process visa applications from Ukrainians fleeing the war amid continuing criticism over the slow rate at which refugees are being admitted to the UK.

The Home Office disclosed on Monday night that just 300 visas have been issued out of a total of 17,700 family scheme applications that have been started, 8,900 of which have been submitted.

With 1.7 million people having fled the fighting so far, defence secretary Ben Wallace acknowledged that the Government needs to move quicker and said he is offering Ministry of Defence (MoD) support to speed up the work.

“The first and foremost duty for all of us is to make sure that people get to safety,” he told Sky News.

“Once they’ve got to safety, making sure we just check their identity before they come to this country – it is incredibly important that we do that.

“It shouldn’t take time. And I’ve offered, I will be offering, to the Home Office assistance from the MoD in the same way we did in Op Pitting (the evacuation of Afghanistan) to increase the processing time to help those people.”

A BBC breakfast news segment, from home editor Mark Easton, said that almost 600 Ukrainian refugees are currently waiting in Calais for visas to come to the UK.

He told viewers that there have been problems processing the applications.

Then Ben Wallace appeared on BBC Breakfast and was questioned by presenter Sally Nugent. She told him: “There’s 100s of Ukrainians in Calais.. & they’re being told to go back to Paris/Brussels to get a visa.. and there’s no appointments in Brussels until 17th March.”

Nugent then followed up saying ‘the UK govt is putting bureaucracy before compassion.’

This table says a lot about who is stepping up as millions flood into Western Europe due to the ongoing conflict.

In response to the seemingly unnecessary delays Simon Hoare MP for North Dorset tweeted: “SIMPLY NOT GOOD ENOUGH. @ukhomeoffice needs to move today from pettifogging process to active delivery. Stop “computer says no” mindset and get on and help. Don’t criticise Irish Republic: replicate it. Remember how we responded to Ugandan Asian crisis? We can and must do this.”

Related: Johnson’s meeting with Lebedev in March 2020 was not recorded….. because it was a party