Truss also had to apologise after incorrectly accusing a Labour MP of supporting amendments to legislation that she said made it harder to bring in sanctions. 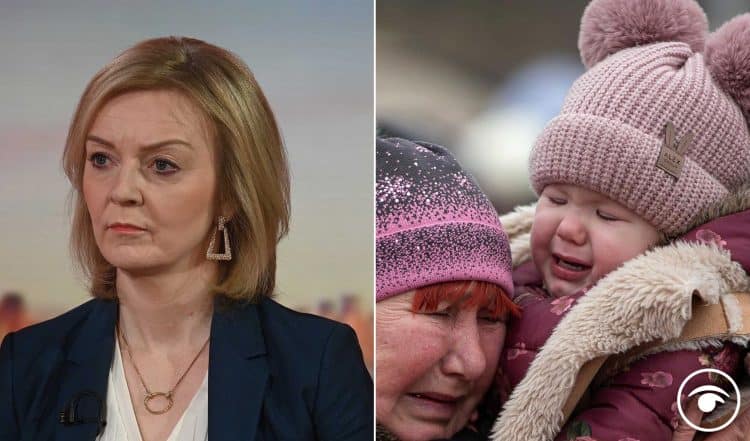 He asked if she was ashamed that other countries had taken in tens of thousands of Ukrainians fleeing Russia’s invasion of the country while Britain had accepted just 50.

Later he asked Truss if she was passing the buck, as Ukrainians must apply for visas at posts run by the Foreign Office, as in Afghanistan.

Truss told the foreign affairs select committee: “I believe that’s a Home Office responsibility that operates out of our post.”

She then had to apologise to Bryant after incorrectly accusing him of supporting amendments to legislation that she said made it harder to bring in sanctions.

Truss claimed Bryant supported “cumbersome amendments” introduced by “lawyers and peers” in the House of Lords that “put a very high bar on our lawyers being able to look at this stuff [introducing sanctions].”

“We have a very cumbersome sanctions process because all of those amendments had been added,” she said.

“You’re on the record, Chris, for supporting those amendments,” Truss said.

However, her comments backfired when Bryant told Truss he had not spoken in that debate and had not supported those amendments.

“I didn’t say – I supported the amendments to introduce the Magnitsky sanctions, I was one of the people who had been arguing for them for many, many years.

“What you’ve just read out is not in Hansard [the record of Parliamentary debates and votes], so I hope you’ll correct the record. I didn’t speak in the third reading debate,” Bryant said.

“Well, we can. I’ve been told you did. So I can get the details,” Truss replied.

“I’ll get my officials to check up on that,” Truss said, before apologising during the session.

“I have now heard from my officials that Mr Bryant did welcome the bill but not the amendments, so I want to correct the record on that subject. I am sorry, it was wrong in my notes, Mr Bryant. I apologise. I will … it was written wrongly in my notes, I do apologise.”