A famous hedge, pruned to look like elephants, could face the chop because their owner is fed up with druggies using them as cover to shoot up.

by Ben Williams
in Weird News 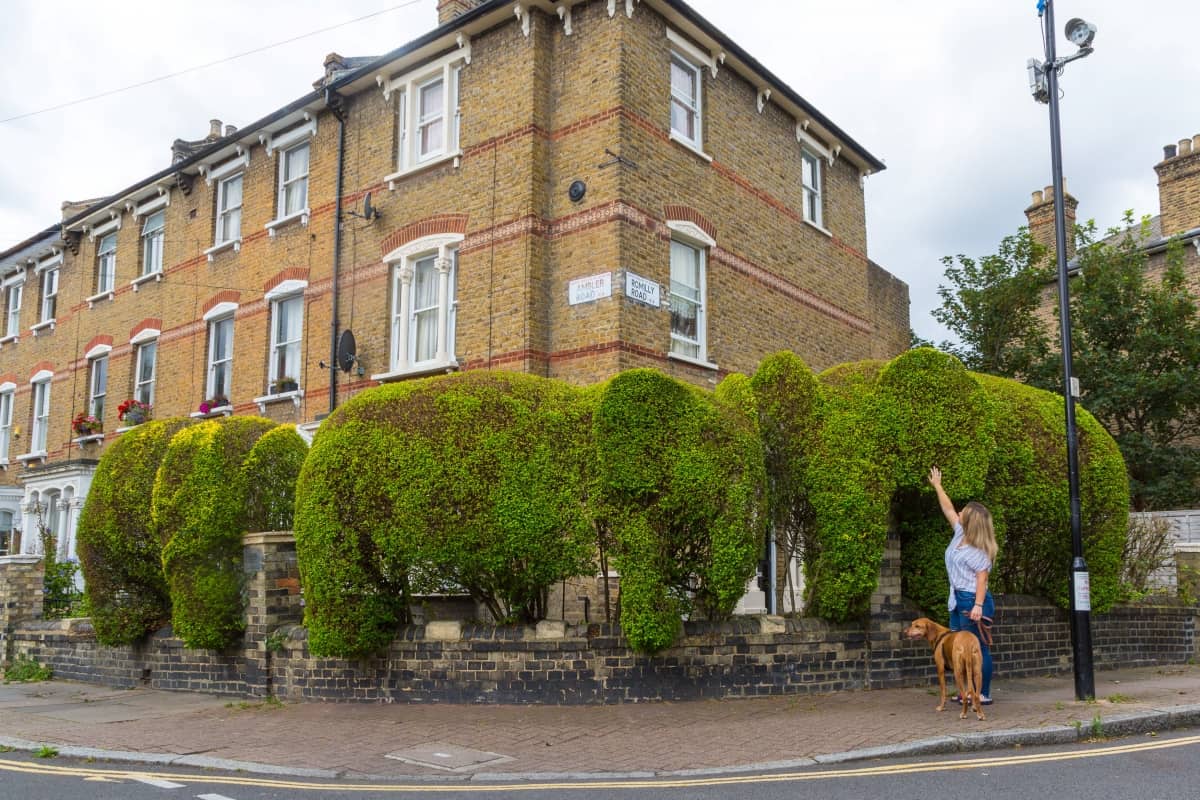 The first-floor flat tenant overlooking the three hedge-carved elephants is considering cutting them down to stop people hiding in his front garden to take drugs.

Tenant Mohammed Ise, dad-of-five, was so frustrated with his garden in being used by drug takers that he cut down a topiary owl which stood alongside the elephants.

He began hacking one of the elephants in his garden in Finsbury Park, London, but desperate neighbours persuaded him to stop.

Designer Joseph Lobo, 55, who has lived on the road for thirty years, said: “The elephants are a talking point and a memorable feature of the area.

“It take a lot of patience, time and care to maintain the elephants.

“I understand he is fed up, but most of the drug taking seems to happen on the high street, not on our road.”

Tim Bushe, an architect and topiarist, first carved the elephants seven years ago in partnership with a community gardening project and has been returning three times a year ever since to keep them in shape.

He said: “When I started cutting the bushes the property had problems with drug takers.

“The idea behind creating the elephants was so that the area under their bodies would leave the drug users more exposed and visible.

“The tenant has many children and I can understand his frustration but I don’t think chopping the elephants down is the best option.

“It definitely won’t make him very popular with the neighbours and other people who come from far afield to visit them.”

The ground floor apartment, which is owned by the Partners for Improvement in Islington (PFI) housing association, is currently unoccupied and boarded up.

Tim added: “The solution lies in the housing association getting somebody to live in the property.

“People looking to do unsavoury things are attracted to deserted spots.”

She said: “Nobody wants drug takers on their doorstep.”

On one occasion Tim was cutting the bushes when a lady from Saudi Arabia approached him and told him she had come to see the elephants.

He said: “She had seen the elephants on social media and was in London visiting.

“She had come straight from Heathrow to see the elephants.”

Local Councillor Andy Hull has backed the Blackstock Triangle Community Gardening Project and is working with the housing association to find a solution which will leave the elephants in place.