The National Trust, which manages the protected Dorset site, said it did not encourage defacements. 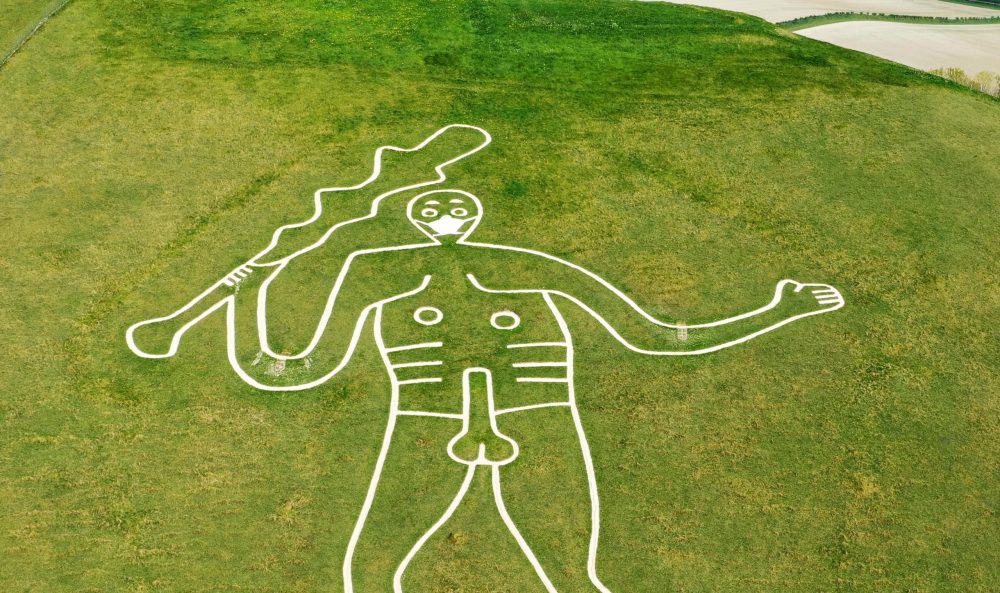 The famous hillside chalk Cerne Abbas Giant has been given an accessory – a medical MASK to his face.

The 180 foot (55m) tall ancient naked chalk figure is believed to have been given the unauthorised alteration on Friday.

It was spotted over the weekend by local resident Kevin Knight, whose home in Cerne Abbas, Dorset, overlooks the hill.

And Kevin added: “I look out of my kitchen window and see the giant every day.

“I woke up on Saturday morning at about 6am and was about to take the dog for her walk when I noticed that the giant had started wearing a medical face mask, perhaps to protect himself or villagers.

“It has been the talk of the village, and sure has lifted everyone’s spirits. Right opposite the Giant is a care home – I’m sure they would have loved it.”

The National Trust, which manages the protected Dorset site, said it did not encourage defacements.

The Cerne Abbas Giant is not normally accessible to the public, in order to avoid damage and erosion – but it has been unofficially altered several times before.

The penis was adorned with petals and leaves in 2019, while two years earlier the name “Theresa” and a tennis racquet were added on separate occasions.

The National Trust said: “While we understand the public’s ongoing concern about coronavirus, we don’t encourage the defacing of the Cerne Abbas Giant.

“Any such action may damage this fragile site, whether by someone physically attaching something to him or giving the impression of having done so, as this may encourage others.

“The giant is protected as both a Scheduled Ancient Monument and as part of a Site of Special Scientific Interest because of its important chalk grassland which supports wild flowers, butterflies and other wildlife.”