Chris Hobbs is a former officer of the Metropolitan Police who served for 32 years including targeting gang crime on Operation Trident Since 2010, police have been constantly denigrated, criticised and abused by politicians, spearheaded by Theresa May, the national press and activists from both the right and the left. Especially prevalent in his criticism of police over […] 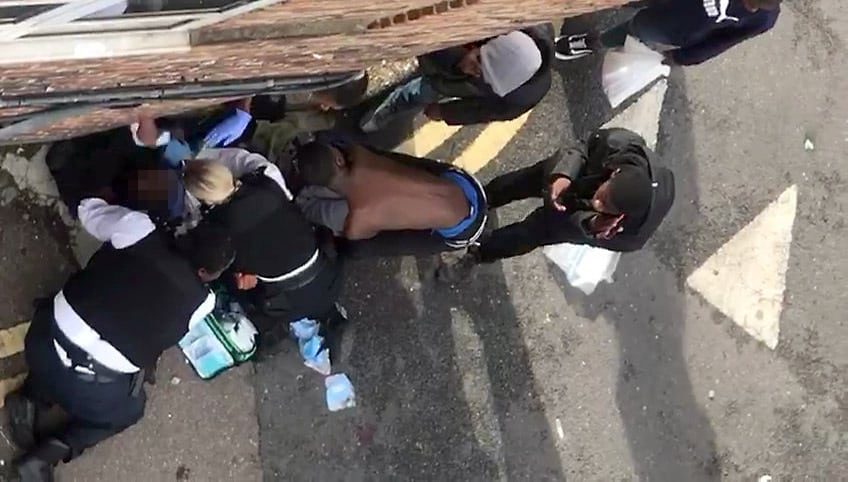 The scene in Camberwell where emergency services respond to a mass stabbing incident. See National News story NNSTAB; A teenager who rushed to help a victim of a quadruple stabbing shouted “I’ll f*cking kill him” before police wrestled him into a van, a witness said. Shocked neighbours said two of the teenage victims had “their stomachs cut open”, leaving the ground covered in blood after the melee in Camberwell, south London. A photo shows one victim, a black teenager, surrounded by a huge crowd of police as he was treated by paramedics. At least one of the youths, said to have been knifed in the arm, had his wound wrapped with a t-shirt while paramedics rushed to the scene.

Since 2010, police have been constantly denigrated, criticised and abused by politicians, spearheaded by Theresa May, the national press and activists from both the right and the left.

Especially prevalent in his criticism of police over recent weeks has been Tottenham’s MP, David Lammy. An examination of his recent quotes in national newspapers including a full Observer article shows unremitting condemnation. His twitter timeline is similarly focussed with an alarming absence of praise for front line police officers who are having to deal with the aftermath of street violence, including death and horrendous injuries.

Criticism of police does not come just from those on the left. I personally witnessed so called patriots hurling chants of ‘scum’ and ‘shame on you’ at police, as well as physically attacking them, during recent pro- Tommy Robinson protests. Little wonder then that criminal elements hostile to police feel able to go that one step further and launch attacks upon officers.

There is no doubt that violence in our society and violent crime itself, much of which remains unreported, is escalating and facing this lawless epidemic is a police service with one of the lowest police to population ratios in Europe.

Added to the fact that police are frighteningly thinly spread, we have a broken criminal justice system that hands down pathetic sentences to violent perpetrators partially due the fact that there is no room in our equally broken prison system. We also have a probation service on its knees and mental health services not fit for purpose amidst what appears to be a dramatic escalation in those experiencing mental health crises.

Attacks on front line police officers have dramatically increased in both number and severity to the extent that those officers have become society’s and perhaps austerity’s whipping boys, yet despite everything, polls still show the police retain the support of the vast majority of the public.

But you would not always know that from the pronouncement of many MPs who are more likely to denigrate than praise the police.

It hasn’t been a good last few days for those police officers working on a policing front line that is becoming ever more demoralised and fractured.

Officers, attending a fight in Islington encountered exceptional violence. Two police officers were stabbed and two others injured. One of the officers is likely to be scarred for life having been slashed across the face.

Just a day later, a Greater Manchester police officer was stabbed several times after chasing a male involved in an armed robbery. He was saved from serious injury by his protective vest while the knife broke. The officer received injuries to his arm and was discharged from hospital.

It also appears that back in August, two Met officers were stabbed in an incident that received, for whatever reason, no publicity.

Officers rushing to incidents never quite knowing what they will find on arrival. Sometimes, at risk to themselves they will arrest suspects; on other occasions they will frequently be on scene before paramedics and will battle to save the lives of those frequently young black victims; such efforts can end in heartbreak, not just for the family and friends of the deceased but for the officers themselves. Scenes at the horrific triple Camberwell stabbing where police battled to save lives and a youth was disembowelled, should perhaps be compulsory viewing for those whose criticism of police is unremitting.

It could be, and indeed is argued, that there is more indignation in respect of filmed stop and searches than there is at individual acts of savagery on our streets.

There is not even the briefest acknowledgement from anti-police activists and MPs that each knife or firearm taken off the streets by police is a potential life saver.

Equally there appears no acknowledgement as to the simple fact that each person fatally stabbed or shot on the streets of London and elsewhere in the UK would still be alive had their assailant been stopped and searched before encountering their victim.

Yet, those who scream ‘police brutality’ at every contentious stop and search or arrest should perhaps compare our ‘brutal’ police with others. Look no further than the actions of Spanish police during the recent Catalan protests.

I spent much time working in Jamaica and grew to love the Island, and its people. I worked with many outstanding Jamaican Constabulary Force officers who perform their duties both under huge pressure and constant threat yet controversy surrounding the JCF in terms of its use of force far exceeds anything seen in the UK.

Sadly in the UK now most persons arrested will be handcuffed simply because, at this moment in time British police are more likely to be assaulted than ever before.

Likewise the question of why it is desirable that several officers, where possible, attempt to subdue one individual is a question that frankly is beyond simplistic. To state the obvious, the more officers the less likelihood of injury to the person being detained who, as was pointed out, has two arms, two legs and a head each of which is capable of causing injury.

A situation can suddenly turn within a fraction of a second as an apparently compliant individual can become a life-threatening menace.

This was illustrated in what is now infamous footage involving a single crewed female officer.

She arrested a male who appeared compliant and, as is or was quite usual, she applied handcuffs to the front. He was sitting, apparently calmly in the back of her police vehicle when he suddenly launched a vicious attack using both hands together. It made harrowing viewing and a significant impact upon police officers across the country.