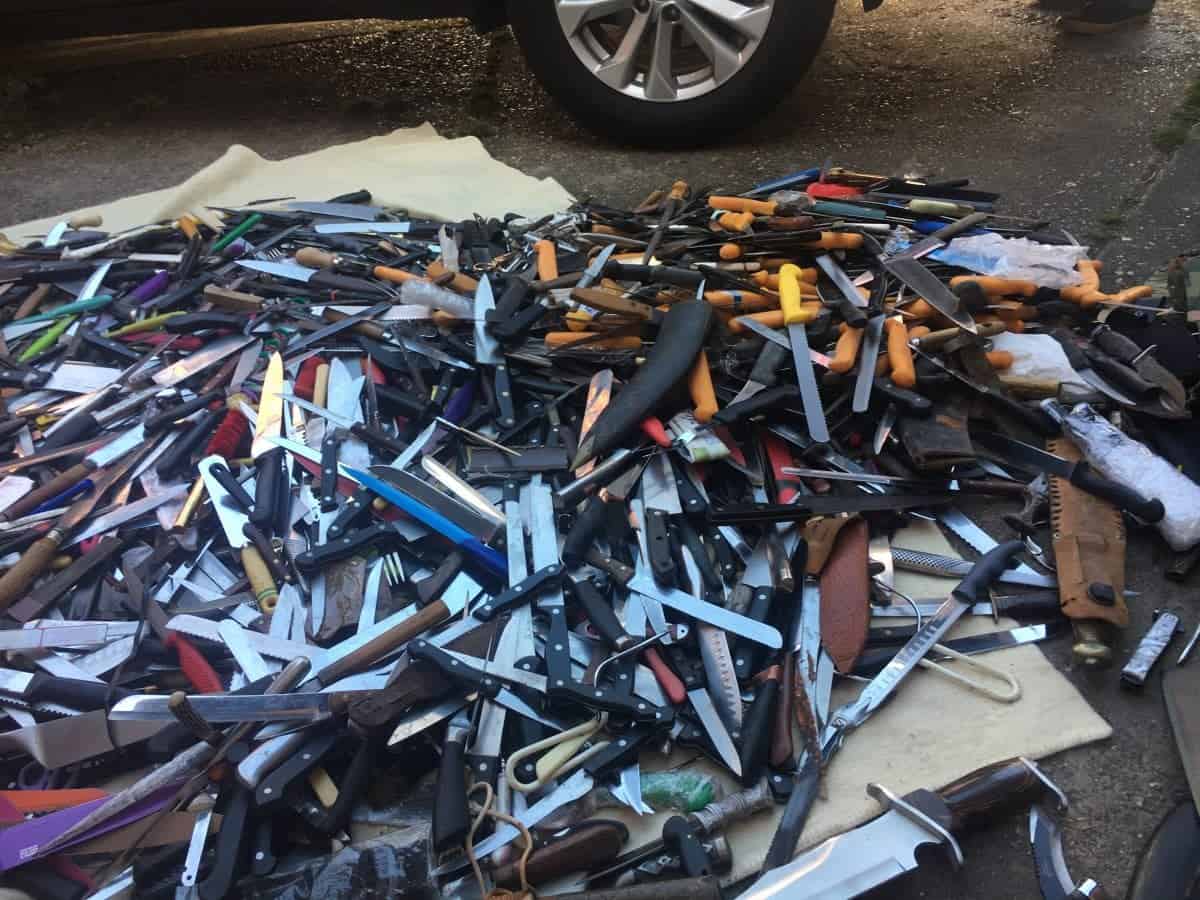 This incredible photo shows the reality of Wild West Britain – in the form of hundreds of blades collected from three knife amnesty bins.

The massive haul of blades was amassed by anti-knives charity Only Cowards Carry from collection points across Essex. 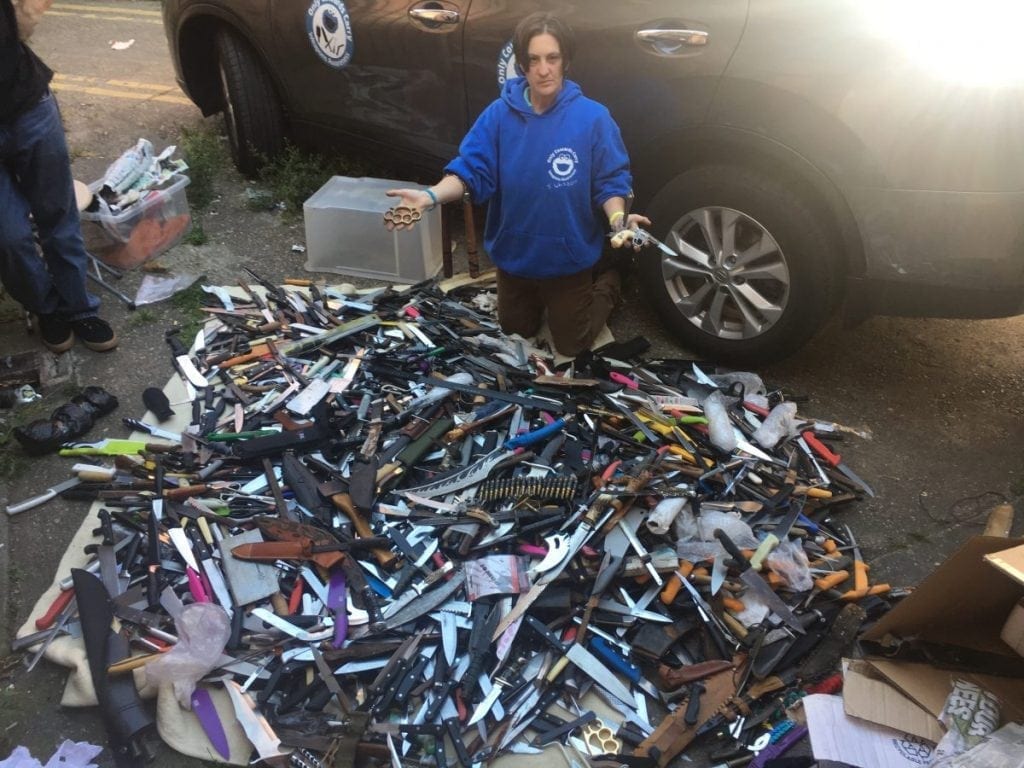 The charity work with the Police Crime Commissioner for Suffolk, and their collections are carried out in collaboration with Essex Police.

The woman stood among the massive haul is Jo Robinson, whose brother James Attfield died four years ago in a ‘frenzied’ stabbing.

One of the other woman involved in the collection is Caroline Shearer, who lost her 17-year-old son Jay Whiston when he was knifed to death at a private party in 2012.

Caroline set up the charity in the aftermath of her son’s death to help get knives off the street, and goes into schools to teach children about the dangers of carrying knives.

Caroline said: “I get quite agitated when people try to defend knives. There is no reason to carry a gun – its more dangerous to carry one than not.”

The charity has trained 20-30,000 school children about the dangers of carrying knives since its creation. 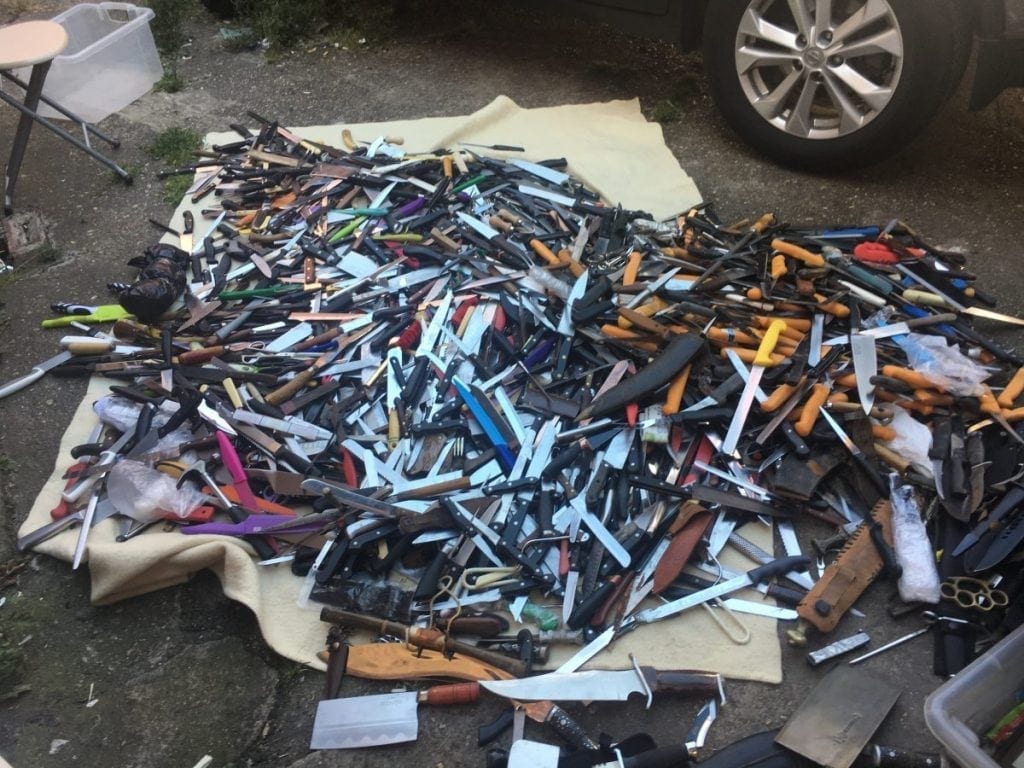 Since Caroline posted the photo on Facebook, it has received more than 1,150 shares.

But she says that her popularity on social media is not the reason why she devotes herself to getting knives off the street.

She said: “I just do it because it needs doing.”

For safety reasons, people depositing weapons in either bin are advised to wrap the weapon or blade in newspaper, before placing it in a secure cardboard box and then transporting it to either site.

Earlier this year, an Essex Police spokesman said the county was still a “relatively safe county” with a comparatively low crime rate.

“Drug and gang-related crime is a growing problem in some areas of the county and we know the impact on our communities this has,” the force spokesman added.

If someone is unsure about whether to bring in a knife they can contact Essex Police on 101 for advice.