Shocking scenes continue in Catalonia with reports that 465 have been injured so far in brutal police attempts to disrupt voting in an independence referendum for Catalonia that the Spanish government had declared illegal. Leftwing Spanish politicians and Catalonian figures have demanded that Spanish prime minister Mariano Rajoy resign after hideous scenes of police violently […] 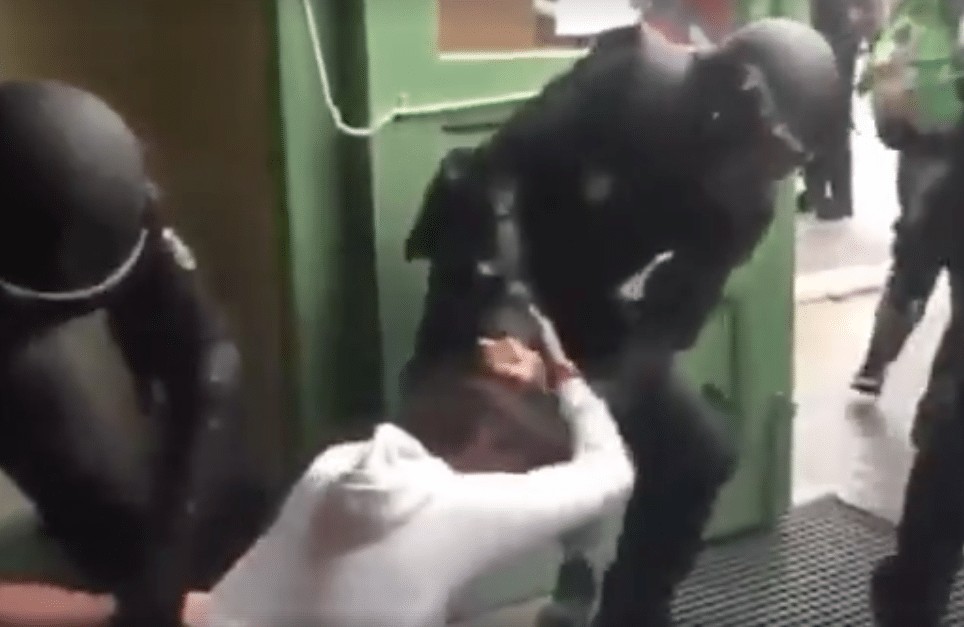 Shocking scenes continue in Catalonia with reports that 465 have been injured so far in brutal police attempts to disrupt voting in an independence referendum for Catalonia that the Spanish government had declared illegal.

Leftwing Spanish politicians and Catalonian figures have demanded that Spanish prime minister Mariano Rajoy resign after hideous scenes of police violently breaking up attempts to vote and the unprecedented protests that have broken out all over the Spanish state.

Police is horrific scenes filmed below were seen using plastic bullets, indiscriminate battons and kicking those attempting to vote and protesting for their democratic right.

Catalonian separatist parties had proceeded with a referendum despite a ban by the Spanish Constitutional Court, even though in most opinion polls Catalans have generally opposed full separation for Spain’s richest state, whose capital is Barcelona.

But the province hasn’t witnessed such brutality from the Spanish authorities since the time of fascist dictator Franco whose regime was particularly cruel with many Catalans disappeared during his reign.

After today’s disproportionate use of violence to clamp down on an independence referendum, tensions between Catalonia and the Spanish state are only likely to be worse.

“We are obviously worried by any violence but clearly the referendum, as I understand it, is not constitutional so a balance needs to be struck,” Foreign Secretary Boris said today. “We hope very much that things will calm down.”

“While we believe disputes over sovereignty should be resolved in accordance with rules and laws, and any referendum on these issues needs to be both democratic and fair, it is unacceptable for the Spanish authorities to overreact to today’s events through aggressive police action and the forcible closure of polling stations.

“They must respect the right to peaceful protest, and all sides must strive to come together and reach a political solution to this constitutional crisis. Violence of any sort will simply worsen divisions, and make a resolution harder to reach.”

Dear @JunckerEU :
Article 7 of the European Union Treaty
"Suspension of any Member State that uses military force on its own population."
Please share.#SpainOutOfEU#ShameOnSpain#CatalanReferendum pic.twitter.com/WUfBoAf75N

The Spanish police are now beating up Catalan firefighters. This is an absolute shocker. #CatalanReferendum https://t.co/zJeTATJQxJ

We must all be condemning the actions of @SpanishGov today. An appalling violation of human rights @catalangov #CatalanReferendum @UKLabour https://t.co/DEnT1rUTUA