“We are the puppets of the lemmings,” Markus Lemke tells me, straight-faced. I nod and sip my cup of coffee. I’ve been with Markus and his sister Melinda for an hour and am beginning to settle into their alternative universe. Along with business partner Rolf Nylinder they are the people behind a rather eccentric coffee […]

by Elizabeth Hotson
in Food and Drink 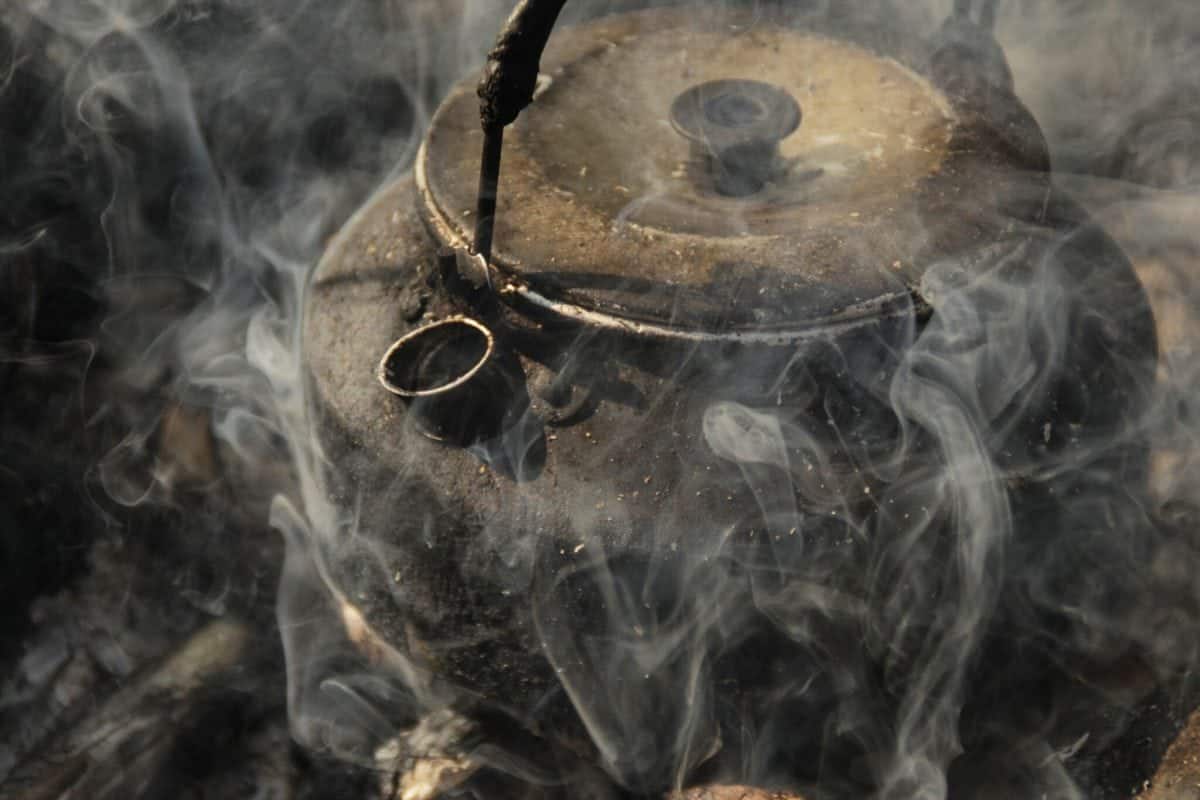 “We are the puppets of the lemmings,” Markus Lemke tells me, straight-faced. I nod and sip my cup of coffee. I’ve been with Markus and his sister Melinda for an hour and am beginning to settle into their alternative universe. Along with business partner Rolf Nylinder they are the people behind a rather eccentric coffee company.

“This is what we call kokkaffe,” explains Markus, lighting a fire in a woodland clearing, “It’s very popular up here in the north but elsewhere in Sweden, not so much. The beans are very dark roasted and coarsely ground. I think it’s a myth that dark roast is really bitter, in some ways it’s actually tastier, it’s got a richer, rounder flavour. And because we grind the beans coarsely the natural fat stays in it.”

As the water gently simmers in a kettle over the fire, Markus takes out a leather pouch and pours in a good handful of dark, almost black, ground coffee.

“When the coffee’s ready we add a bit of salt, like you would when cooking food, and that brings out the flavour even more.”

“How long do you leave the coffee on the fire?” I ask.

“It’s ready after maybe five to 10 minutes of brewing but sometimes when campers and hunters make it in the mountains, they leave it an hour or more.”

When the brew’s ready, we walk up to a basic but cosy log cabin where Melinda passes me a plate of cheese.

“It’s for your coffee,” she says like it’s the most regular thing in the world. “You leave it in for a few minutes and it soaks up some of the liquid. It gives a really good savoury flavour to the drink.”

I have accepted that normal rules do not apply in the company of Markus and Melinda and after a short wait, I unquestioningly eat a lump of the cheese. It’s kind of squeaky in a peculiarly delicious way.

“We like cheese but it’s also traditional to add different kinds of meat to coffee, moose for example, or you can just add fat if you want.”

Kokkaffe itself has been around for a long time, as the hot drink of choice for hardy northerners; but around five years ago, Markus, Melinda and Rolf, natives of Swedish Lapland, decided to make the rest of the country – and the world – aware of its existence. They’ve done a pretty good job so far; their company, Lemmelkaffe, has sales of around £160,000 per year. Half of that is accounted for by their achingly trendy and beautifully designed merchandise. Ever dreamed of owning a moose skin coffee pouch? They have it. Fancy a handcrafted, wooden drinking vessel? You’re in luck. Hankering after an £85, 100g, bag of coffee that’s been in space? Hand over the cash and it’s yours – as part of a marketing ploy, in 2015 the team sent a 2 kg of dark-roasted kokkaffe to space and you can buy some if you and your wallet are so inclined.

Of course, Markus doesn’t couch the stunt in such prosaic terms as ‘marketing’. “The lemmings told us their ambition was to go into space and they’ve done so much for us, we wanted to help them,” he explains. At this point it’s worth noting that no illegal substances were involved in this conversation, just a requirement to suspend one’s disbelief. I chew another square of cheese as Markus tells me the full story.

“Back in 2012 me, Melinda and Rolf were out in the Arctic, up in the mountains. Sometimes when you’re up there you meet the lemmings. They’re naturally aggressive and make a lot of noise. The noises they made sounded like “coffee, coffee!” We followed them to the river bank where they told us their story. It turns out they migrate to Africa, pick one Arabica bean each, then head east to the Moroccan coast and float along the Gulf Stream to northern Norway. They lie under the snow with the beans and their body heat slowly roasts the beans. We agree with the lemmings that they have the best beans in the world, so now we’re working for them. Ultimately we’d like to support them on their space mission.”

No amount of gentle pressing or ingenious prying will induce Markus to diverge from this tale so I don’t get to see the roastery – which Markus insists is run by the lemmings. But what I do wrangle from him is that the beans are organic and depending on the season come from Ethiopia, Peru and Honduras. There isn’t a physical shop, but Lemmelkaffe sells beans to dozens of local outlets and and across the rest of Sweden. They also export to Norway, Japan, Finland, the Netherlands and the US, and customers can also buy online. Melinda however says they’re cautious about expanding too quickly,

“We’re quite niche in that our product is about making coffee outdoors so it tends to appeal to hikers, hunters, people who fish. We are growing fast but at the same time we’re very selective; we want the right retailers, not necessarily the biggest.”

Lemmelkaffe has hit upon a winning product and marketing combination and as I fish another lump of delicious caffeinated cheese from my dark brown cup of kokkaffe, I realise I’ve been completely drawn in.