With a Soho deli having successfully operated for the past 75 years, Lina Stores has opened a nearby restaurant. 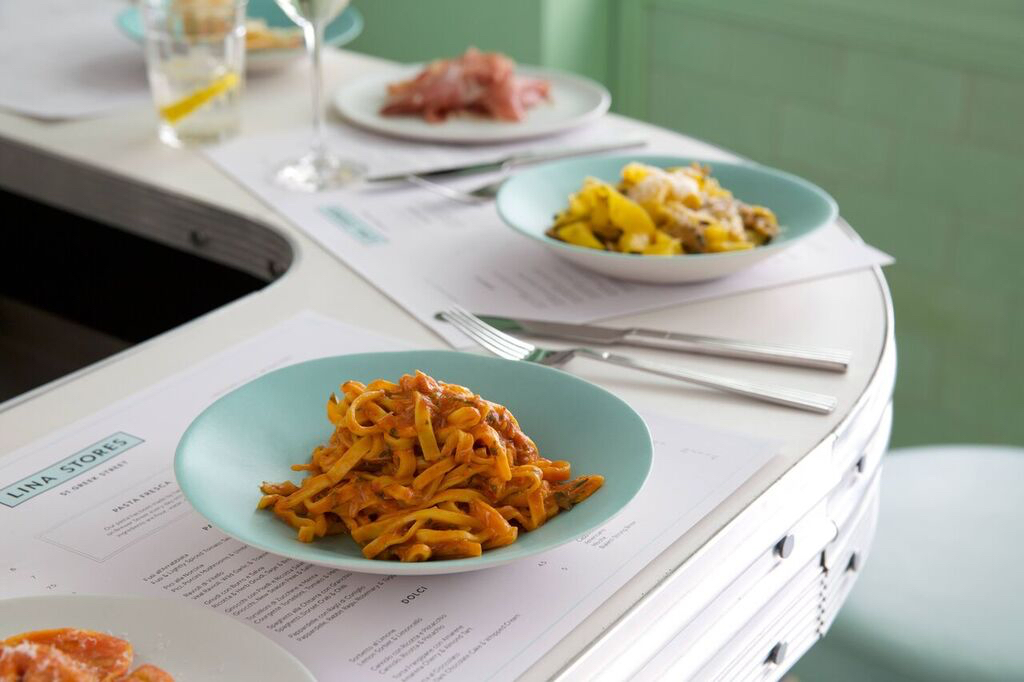 A seminal figure in the development of Soho’s vibrant food and restaurant scene, Lina Stores was opened by a Genovese family in 1944. Once a pillar of the area’s strong Italian community – alongside the likes of the world-famous Bar Italia, later followed by Trattoria da Otello, Hosteria Romano (both now closed) and Amalfi on Old Compton Street – Lina Stores sold Italian ingredients once unfamiliar to Brits, long before leading UK supermarkets. 75 years later, the deli continues to sell fresh pasta, cured meats, cheese and antipasti from its original site on Brewer Street.

Joining the endless parade of small, casual restaurants that have conquered Soho in recent years, Lina Stores launched a restaurant proper last year, just around the corner on Greek Street. An expansion of the original deli, the restaurant fits a model popularised by the likes of Padella, Pastaio and Bancone: rapturously received restaurants that serve concise, affordable menus particularly rooted in various pasta dishes. Unlike at Padella and Pastaio, however, it’s possible to book for lunch or the evening’s first dinner sitting at Lina Stores.

Set across two floors, the restaurant has space for 51 covers. On the ground floor, a counter with 12 barstools stretches along the narrow room, while the darker basement dining room is somewhat cosier. The deli’s trademark shade of pistachio green permeates the design, from the walls to the crockery, to the chefs’ aprons. The best seats are at the counter, yet the stools towards the back of the room (facing the oven) can get uncomfortably warm. In keeping with the restaurant’s casual nature, service is efficient; quick, yet warm and welcoming.

As for the food served here, the menu is relatively concise, comprising antipasti and a fair selection of pasta dishes using pasta that’s handmade everyday at the deli. A recent dinner began with a round of sourdough semolina bread served with Alma Mater bio extra virgin olive oil for dipping (£3); and tangles of Venetian prosciutto with gossamer fat cloaking the vivid garnet flesh (£6.50). A pair of simple, sating dishes washed down with a glass of Tuscan Chianti Classico from Molino di Grace, vaunting prominent notes of red cherry and feint oak. Tonno tonnato (£9.50), on the other hand, was a superlative iteration of the classic Italian dish, favouring gently seared tuna over traditional Piedmontese veal, slathered with a mayonnaise-based sauce rampant with anchovies and more tuna.

To follow, ribbons of pappardelle were a little thicker than desirable, but served with a restorative ragù of slow-cooked veal, amplified with rosemary and sage alongside the subtle sweetness of the tomato sauce (£10). ‘Double ravioli’ (£7), meanwhile, featured three parcels of thin pasta stuffed with a holy trinity of minted courgette, salted ricotta and parmesan cream, compensating for the pasta’s lack of accompanying sauce. Ricotta and herb gnudi (£8.50) were the jewel in the menu’s crown, however. A quietly revelatory combination of silky ricotta, slightly bitter spinach and breadcrumbs – the verdant dumplings were perfectly cooked then lashed with a gloriously complementary sauce of brown butter spiked with crisp sage leaves. To finish, Lina Stores’ cannolo featured two fillings: chocolate and pistachio, each armoured with crisp pastry to contrast the remarkably fresh ricotta filling.

While Lina Stores doesn’t necessarily push boundaries with its cooking, the restaurant champions certain unfussy specialities and executes them with uncommon aplomb. An ethos that should (hopefully) guarantee continued success.