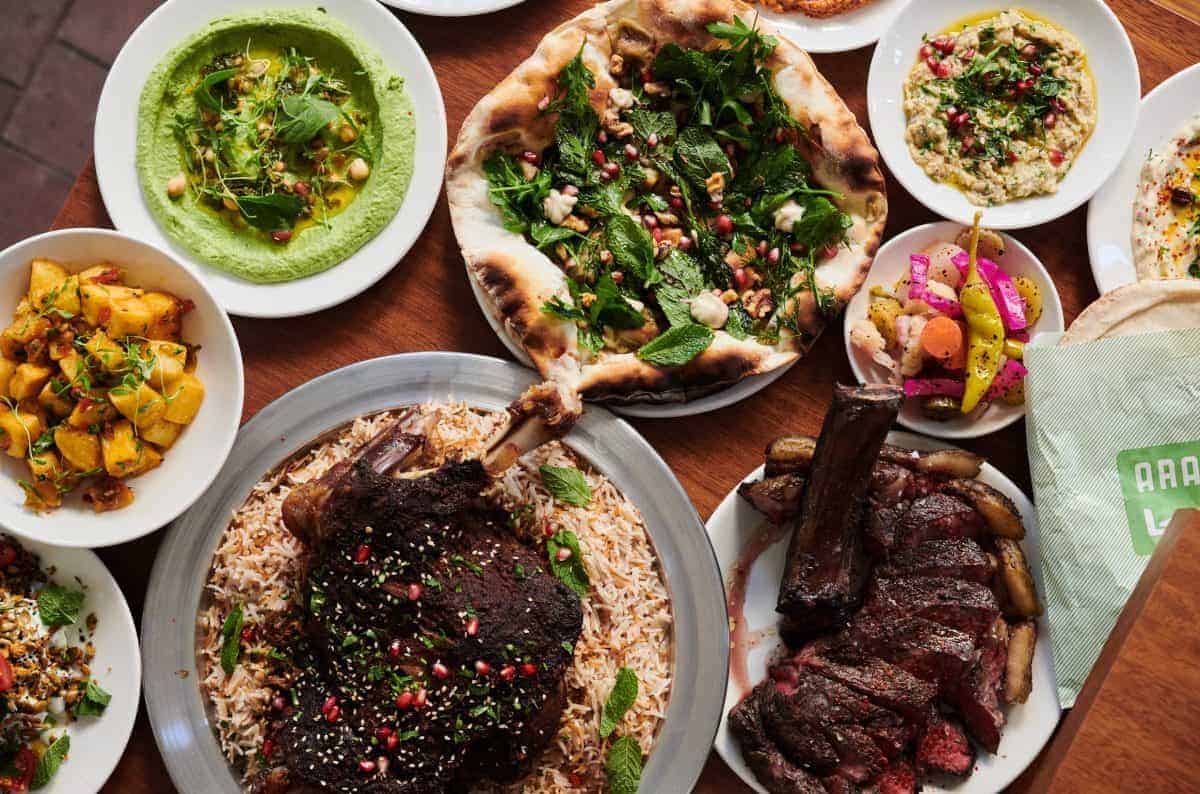 Building on the success of the Borough Market original, Arabica’s sister restaurant will open in King’s Cross. House within the recently opened Aga Khan Centre, the new restaurant will offer an almost entirely new menu (complemented by a handful of the best-loved dishes from Borough), drawing inspiration from recent adventures through Jordan, Lebanon, Istanbul, Beirut, Jerusalem and Tel Aviv.

For the new restaurant, the menu will include the likes of Istanbul-style mussels with walnut tarator; beef cheek borekas; beef and bone marrow Arayees; and kebab el Arabica. In regards to the meat dishes, Arabica King’s Cross will serve grass-fed halal beef and lamb, and free-range 81-day, slow-grown Fosse Meadows chickens. Vegetarian and plant-based dishes, on the other hand, will include hummus KX with sweet peppers, red chilli and roasted chickpeas; fava dip; and a house salad with raw vegetables, orange blossom vinaigrette, crumbled barley rusks, barrel-aged feta and roasted pistachios. Arabica affogato, a house-made soft serve with Turkish-style coffee, cardamom honeycomb and walnut baklava, will be available for dessert alongside Turkish-style Kunefe. Arabica King’s Cross’s wine list has been overseen by Zeren Wilson of Bitten and Written, championing emerging wine-makers from Macedonia, South Africa and Australia while showcasing long-time Arabica favourites such as Lebanon’s Domaine de Tourelles vineyard.

Following a string of successful pop-ups, Oded Oren will open his first restaurant, Oren, showcasing his unique cooking style combining Israeli and Middle Eastern influences. Occupying a 35-cover space on Shacklewell Lane, the new restaurant will serve the chef’s combination of bold Middle Eastern flavours with a prominent focus on balance and simplicity. Highlights from the menu will include the likes of ox cheek and hummus, made with Israeli tahini from Mount Gerizim; and Jerusalem mixed grill with tahini and turmeric pickled mango. Other dishes will include the likes of grilled lamb sweetbreads and za’atar; cured sardines with Cretan olive oil; monkfish ‘chraime’ and hand rolled cous cous; chargrilled hake kebabs and sheep’s yoghurt; and freekeh-smoked green wheat with Westcombe dairy ricotta and fresh herbs. Desserts will include a cardamom panna cotta with lemon verbena; chocolate mousse, and sweet tahini.

The wine list at Oren will also be curated by Zeren Wilson, featuring a concise selection of wines championing smaller growers working along organic/biodynamic and principles of low-intervention winemaking, as well as a frequently changing ‘guest wine’ spot to include wineries from around the world.

On the launch of his new restaurant, Oren Oded said: “To be finally opening my first solo restaurant is a dream come true, and to be doing it in London is even better. The project is entirely self-funded, and I’ve been working hard to get the site ready with my team – I am so excited to be soon sharing my food with everyone”.

Oren is set to open in October and can be found at 89 Shacklewell Lane, London, E8 2EB.

Famed for its menu comprised of sushi and grilled yakitori sticks, Sticks’n’Sushi will open its seventh central London restaurant this month, taking over a 170-cover site in Soho. Quickly following the launch of the new Kings Road restaurant in Chelsea, the Soho site occupies two storeys of a newly constructed building with a striking glazed brick façade featuring 100 different iridescent shades.

As for the food served, the menu will include Sticks’n’Sushi signature dishes such as Hell’s Kitchen maki with tempura shrimp and Japanese barbecue sauce, and yakitori skewers including the Buta Yaki with organic, free-range pork from Denmark. Moreover, the new restaurant will also launch its own sustainable, British-brewed sake, ‘Rice Revived’, to coincide with the opening of the Soho venue, brewed from surplus rice by Kanpai, a micro sake brewery in London.

On the launch of the new restaurant, Andreas Karlsson, Group CEO said: “Finding the ideal locations for Sticks’n’Sushi can take us some considerable time. We devote a great deal of energy to looking for the perfect sites, and we’ve now found the right spot in Soho.”

Sticks’n’Sushi Soho is set to open on Wednesday 9th October and can be found at 40 Beak Street, London, W1F 9RQ.

Following the launch of a new Peckham restaurant, Tonkotsu will bring its famous ramen to Shoreditch later this month. In a brand new building near Shoreditch High Street, the brand’s 11th London restaurant (plus another in Selfridges, Birmingham) will focus on the group’s signature dish: signature ramen bowls. Each bowl is made with Tonkotsu’s own fresh noodles, which are made in three different types, using mid-century machines imported from Tokyo. Stocks are also made from scratch each day, simmering for hours to get the maximum flavour into each bowl of ramen.

Here, the menu will feature the signature Tonkotsu ramen, a rich and creamy pork and lardo broth with thin-cut noodles, and topped with roast pork belly, bamboo shoots, bean sprouts, spring onions, burnt garlic oil and a seasoned egg. Other favourites include the Chilli Chicken Ramen – a chicken and sea salt broth enlivened with Tonkotsu’s Eat the Bits Chilli Oil – and the vegan Mushroom Miso ramen. All soups can be customised with extra toppings such as kimchi or the new spicy Scotch Bonnet hot shot. Elsewhere, steamed gyoza will also be served alongside Tonkotsu’s chicken kara-age, Eat the Bits chilli chicken wings and sides such as squid and prawn popcorn. A short drinks list will include a sake specially brewed for the new restaurant, plus a Shimoda Session Pale Ale produced by Magic Rock Brewing.

Tonkotsu Shoreditch is set to open in October and can be found at New Inn Yard, 1 Anning Street, London, E1 6HU.

A grab and go restaurant, ARMA will specialise in Middle Eastern shawarma, hoping to bring a modern, fresh approach with a high quality offering for lunch and dinner. Founded by Reda Benmiloud and Sultan Al-Kabeer, the new restaurant will serve authentic shawarma with a choice of chicken, beef or falafel. Everything will be made fresh, with beef and chicken marinated overnight before being cooked slowly on a vertical spit. The falafel will also be made in house, available wrapped in traditional flatbread or as a salad bowl with tabbouleh, pickled turnips, fresh parsley, mint, and garlic sauce. Sides will include hummus; tabbouleh; spinach salad; fries loaded with chicken or beef with chilli sauce, and ARMA’s own dips – tahini, fresh herb, garlic, and chilli. Traditional Middle Eastern date cake will be served for dessert.

ARMA is set to open on Thursday 3rd October and can be found at 33 Dean Street, London, W1D 4PW.