I’ve never felt cool enough for Shoreditch. Even when I used to wear questionably tight jeans, spent all of my money on vinyl records and devoted some of my late teenage years to writing about emerging Indie bands for the NME, I never quite managed to fit in. In 2018 though, now that much of […] 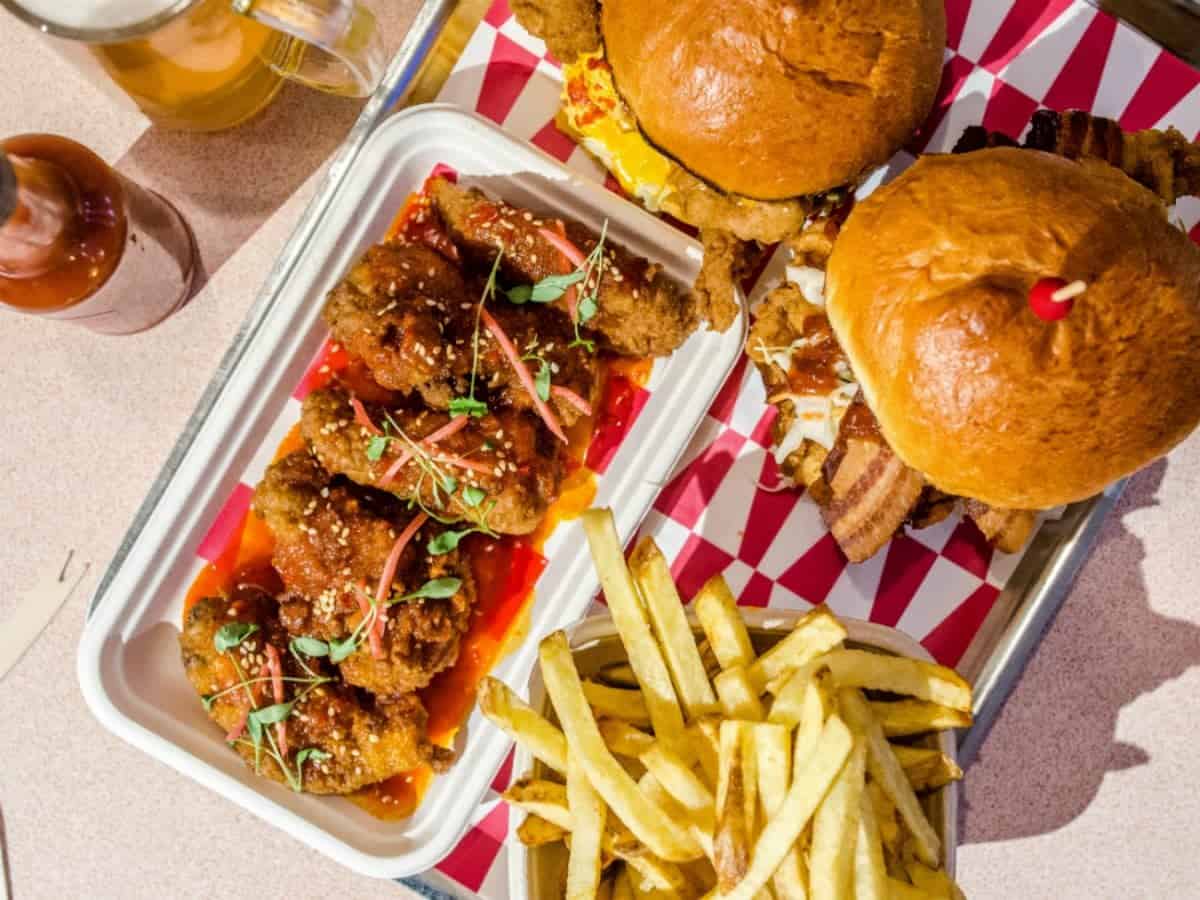 I’ve never felt cool enough for Shoreditch. Even when I used to wear questionably tight jeans, spent all of my money on vinyl records and devoted some of my late teenage years to writing about emerging Indie bands for the NME, I never quite managed to fit in.

In 2018 though, now that much of Shoreditch has gone from up-and-coming to up-and-gone – with everyone having migrated to further reaches of Hackney or Peckham – I imagined things may have changed. Recently arriving at Old Street station twenty minutes early for dinner, I fancied a quick coffee. Not particularly keen on drinking from a handle-less soup bowl, however, I settled for a “super juice” from an underground coffee shop under the roundabout. Enquiring into the whereabouts of the nearest cashpoint, I noticed the Crypto Currency ATM lurking in the corner and became the first living man to suffer from temporary Rigamortis, overcome with terminal revulsion. Why had the Northern Line sent me hurtling into such a horrific dystopian future? 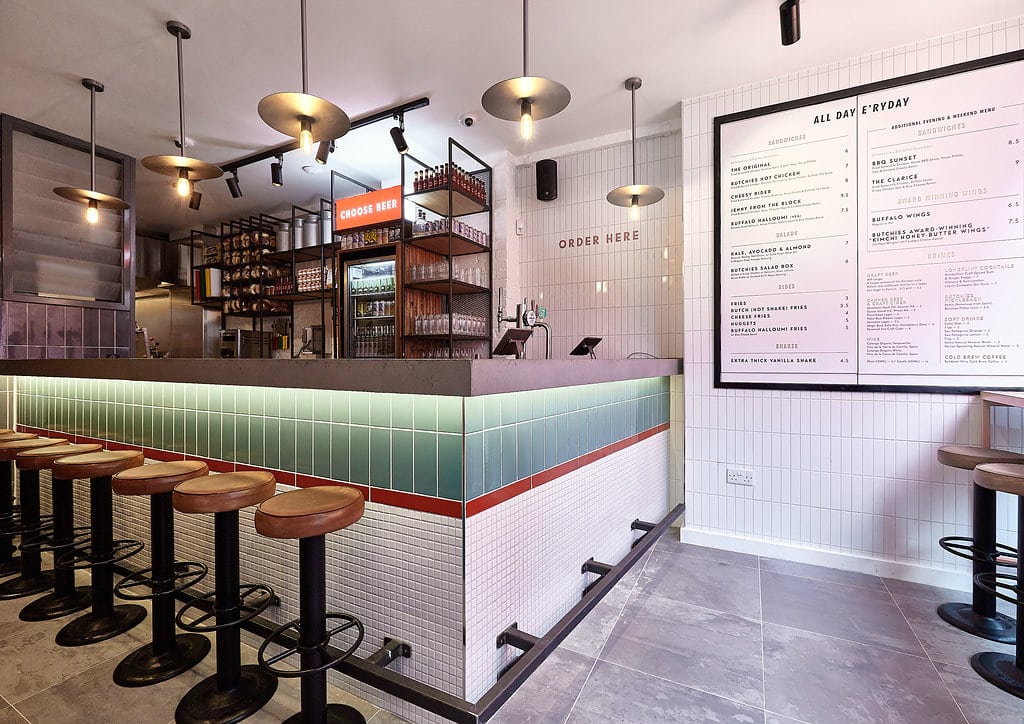 I’d come to Shoreditch with the specific intention to eat fried chicken at Butchies, a new chicken shop, but not as such institutions are typically known. Set up by husband and wife team Garrett and Emer FitzGerald in 2014, Butchies began life as a street food vendor on Broadway Market. Following the resounding success and excitement surrounding their fried chicken, a permanent “hatch” opened in Camden market during 2016, quickly followed by a proper permanent restaurant which opened on Rivington Street at the end of 2017.

“When we started as a street food business in 2014 it was very much a weekend hobby,” Garrett tells me. “Ever-growing queues combined with selling out earlier and earlier each week at Broadway Market made us realise we were on to something really special. We got so busy leading up to summer in 2014 that it just made financial sense to pack in the desk job [director of a property management company] and go full time with the business. It was one of the best decisions I have ever made. The last four years have been gruelling work, but I have had an absolute blast and Butchies has exceeded our wildest expectations.”

“Why Shoreditch?” I ask. “Butchies started in East London and it was a 10-week pop up at Red Market on Rivington Street in the summer of 2014 that finally convinced me to quit the desk job. Having lived and worked in East London for the past 10 years, it is amazing to be giving Butchies a permanent home in our own backyard.”

The last four years have been gruelling work, but I have had an absolute blast and Butchies has exceeded our wildest expectations.”

It’s been an interesting week for fried chicken; what with KFC’s chicken ‘crisis’ and subsequent temporary closures having made recurring headlines. Some have even resorted to calling emergency services over the shortage. For the other 51 weeks of the year, fried chicken is taken very seriously south of the river (where I live) – even though we rarely pay more than £3.69 for an entire meal.

In North London, on the other hand, Elijah Quashie – a YouTuber best known as ‘The Chicken Connoisseur’ – became a viral success last year, with his ‘The Pengest Munch’ videos featuring forthright reviews of North and East London chicken shops. Quashie’s video review of Chick King, a Tottenham chicken shop which sells four chicken wings for £1.30 and three pieces of chicken for £3.15, has garnered over four-million views.

At Butchies, however, high welfare produce is a crucial part of the operation. This is not the high street fried chicken pumped with hormones I’ve been solely blaming for Gynecomastia for years; nor is it Morley’s four winglets for 99 pence I’ve grown begrudgingly accustomed to.

Speaking about the high welfare chicken served, Garrett passionately explains: “I only started Butchies so that one day I would have a restaurant. I wanted to slowly build a brand that could one day evolve into something bigger. This meant that I didn’t take any shortcuts or make as much money as I could have from street food – I used expensive prestige suppliers (chicken, packaging, etc.), which killed our bottom line but was essential for differentiating ourselves from the competition and also letting customers know they were buying a premium product. I also insisted on cooking all our chicken to order on the street – this lead to longer queue times and is way more time [and] labour intensive. I always knew if Butchies was going to be sustainable we would need to stand on our own two feet.”

All of Butchies’ chicken is sourced from Castlemead Poultry, a small free range farm in Frome, Somerset. These classy birds are free to roam the surrounding fields, incorporating natural goodness into their diets, complimenting the locally grown and milled cereals they’re fed. Here, the chickens are allowed to grow in their own time (without Oestrogen supplements), which contributes to succulent meat that’s firm and rich in flavour. “For us it’s all about flavour and the welfare standards of the birds,” Garrett tells me. “The chickens are processed onsite and hand finished for that farm to fork taste.”

Tucked away behind Great Eastern Street, Butchies is placated by a red logo that works as a stylish chicken shop tribute. Set across two floors, the fast-casual space is clean and modern, accommodating 45 covers and serving chicken that’s available to eat in or takeaway. As for the menu, fried chicken sandwiches are prioritised, each playfully named (‘Cheesy Rider’, ‘Jenny From The Block’, ‘The Clarice’). Elsewhere, a selection of wings, sides and salads are available. I take a seat upstairs with a can of Magic Rock’s Salty Kiss (a perfect sour beer to pair with fried food), provided with a pager that vibrates bombastically when the food is ready to collect – dancing to a soundtrack primarily consisting of classic R&B.

Towered like skyscrapers, the sandwiches are served on metal trays with red and white geometric paper. The ‘Original’ costs £6, compared to £4.99 for KFC’s Fillet Tower burger, and is far superior. Ensnared within a buttered brioche bun, a thick chicken fillet is combined with garlic and herb mayonnaise, shredded lettuce and house pickles. What’s most impressive, however, is the transcendent crispness of the chicken’s buttermilk batter – texturally similar to Findus crispy pancakes, yet considerably more edible. The batter is also impeccably seasoned and gently spiced, striking outstanding balance between the burger’s other flavours. The tremendous balance is the result of a final product that’s clearly been relentlessly tried and tasted, altered more often than Donald Trump’s press team.

‘Jenny from the Block’, on the other hand, features that same buttermilk fried chicken fillet, but it’s teamed with smoked streaky bacon, guacamole and chipotle mayonnaise that lends some piquancy against the avocado. Skin-on fries aren’t much to shout about, but the wings: oh God, the wings. Having won first place in the Wingfest 2017 Judges Choice Award, six drumettes are battered, fried and slathered with a mixture of kimchi, honey and butter. The sweetness of the honey prevents kimchi overkill (as is so common in 2018) and the butter adds another depth of insalubrious joy. Desserts aren’t available, but since when have chicken shops served tolerable puddings?

Butchies can be found at 22 Rivington Street, London, EC2A 3DY.