A ceiling fixer has made £400 from selling £10 KFC bargain buckets online – for £100 each. He posted an ad on Facebook selling ‘rare’ ten-piece bargain buckets for £100 from the chicken takeaway chain, which had to close more than half of its stores nationwide due to a problem with their supplier. The man […] 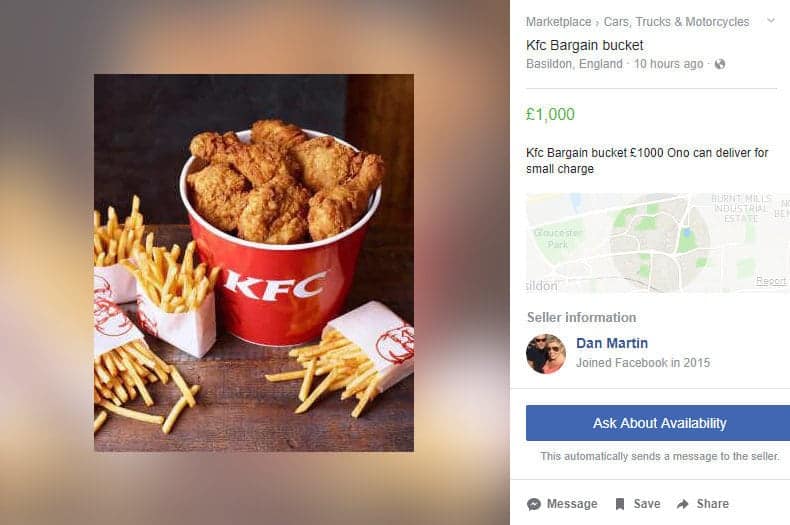 He posted an ad on Facebook selling ‘rare’ ten-piece bargain buckets for £100 from the chicken takeaway chain, which had to close more than half of its stores nationwide due to a problem with their supplier.

The man managed to flog each chicken portion for a whopping £10 each – a 1000 per cent mark-up.

The 30-year-old said he drove from his home in Brighton, East Sussex, to buy the buckets from a “friend” who works at the KFC store around 20 miles away in Eastbourne, before dropping them off to two addresses around the county.

Since the closure of KFC restaurants around the country on Tuesday, quick-thinking entrepreneurs have been cashing in on the shortage of fried chicken by selling meals on the black market for hundreds of pounds.

On Facebook alone bargain buckets are being advertised for as much as £1,000, some for £400 and one burger meal was even priced at £100, with added delivery charge.

Sellers in London, Liverpool, Brighton, Bristol, Blackpool, Chester, Windsor and Milton Keynes have been jumping on the banf wagon to try and fill the gap left by the KFC depot chaos.

One seller said he could include the famous KFC gravy for £20, with another chancer flogging a KFC meal he found in his hotel room for £2.

In his Facebook Marketplace advert said: “I’m able to get hold of KFC bargain buckets from a ‘friend’. Only doing buckets in 10pcs. All delivered hot and fresh.”

KFC fanatics of the fast food chicken restaurant described the finger-lickin’ drought as ‘the worst news for years’.

The dad-of-one said he could not believe his customers bought the expensive fried meals.

But when he got to their addresses, he claimed they were desperate for their fix of the Colonel’s secret blend of 11 herbs and spices.

“It’s just about worth the normal price you pay, but it seems people that are ‘desperate’ will happily pay a huge premium.

“I’m just wondering how they’re going feel when in a week or two when it’s all back to normal, and them knowing they paid £100 for some chicken.

“The people didn’t really say much other than ‘thanks, I’m glad you got some’, it was me that did the talking more than anything.

“I was totally shocked and kept asking ‘are you sure you really want to pay this for KFC?’ They couldn’t get it out of my hands quick enough.”

With the proceeds, he said he would be taking his wife Zoe, and children Edward and Sapphire on a surprise trip to the Warner Brothers Harry Potter studio tour in south London.

The ceiling fixer and dryliner will not be giving up his day-job and moonlighting as the Colonel’s delivery man for much longer though.

He added: “Sadly Eastbourne is now out of chicken so all good things must come to an end.”