These are the best pubs in South London

by Joe Mellor
in Best of London, Food and Drink 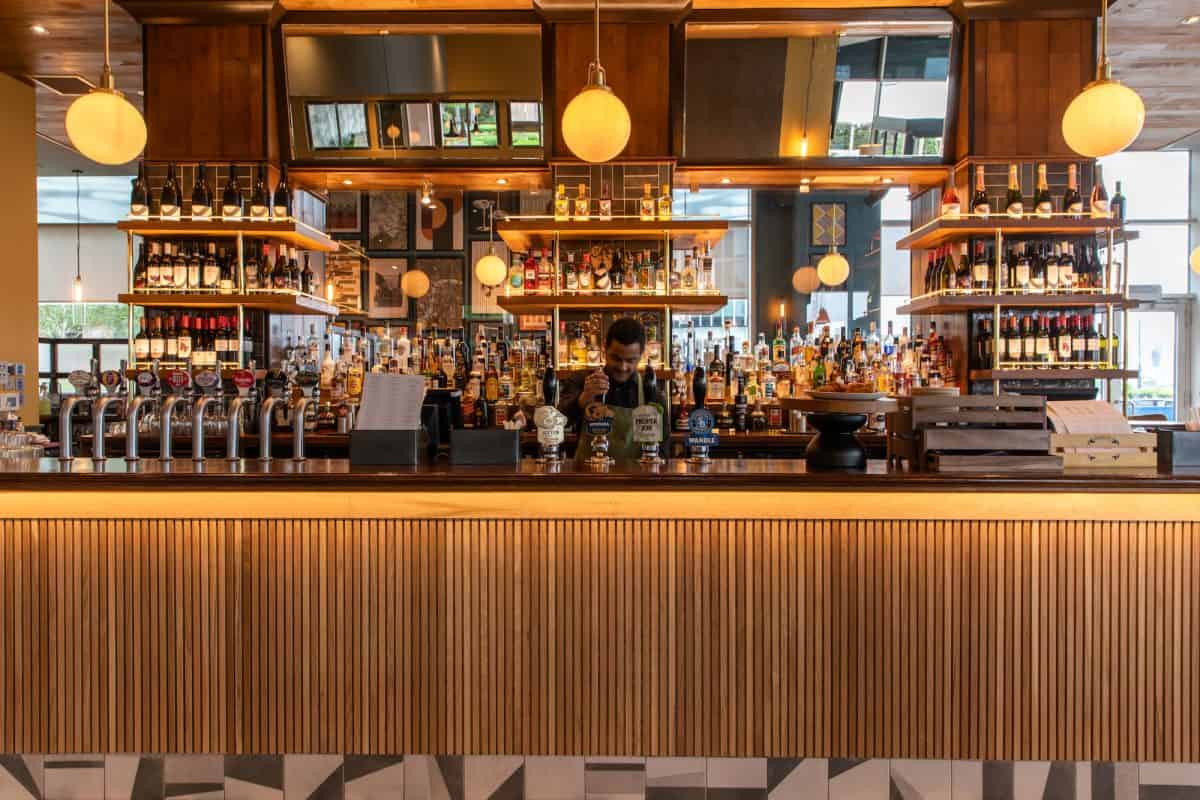 A cornerstone of society, the pub has played a vital role in British history for many centuries. While classic pubs continue to be celebrated (in the UK and beyond), countless establishments have disappeared from our villages, towns, cities, and high streets. Now, more than ever, these institutions rely on our support, most notably due to the extraordinary strain caused by the effects of the coronavirus pandemic. Hundreds of excellent examples continue to operate, however, and they’re in need of as much support as possible. As businesses continue to re-open following the second national lockdown, we pick the best pubs in South London.

An oasis hidden away in the St George Wharf complex on the banks of the river Thames, The Riverside boasts amazing views up and down the river and over London’s skyline. There are surprisingly few watering holes on the south side of the river near central London and on a sunny day you will get a tan until sunset. You can also still see central London, if the idea of South London scares you. South London Lite, if you will.

The Riverside can be found at Riverside Walk, London, SW8 2JE.

Tucked away in Clapham Old Town, just far enough from the bustle of the high street, savour a pint of real ale at The Sun after a picnic on the common or refuel with a plate of freshly cooked pub food after walking the dog. Fashion designer Vivienne Westwood lives near-by, so put on your best attire.

The Prince of Wales, Kennington

Situated on Cleaver Square, The Prince of Wales is a beautifully-preserved Georgian gem, close to Kennington tube station, the Oval, and the Imperial War Museum. The pub is reputed to have been the favourite watering hole of the Richardson gang, arch rivals to the Krays, during the 1960s. Now actors, judges and politicians can often be found enjoying a quiet pint. It is always a favourite for those going to the Oval to watch cricket.

The Prince of Wales can be found at Cleaver Square, London, SE11 4EA.

Originally a Victorian coaching inn, The Rosendale is a magnificent public house with a handsome bar and elegant dining room serving simple, seasonal, and sustainable food. Located in leafy West Dulwich, the pub has extensive gardens featuring a climbing frame for children and table tennis, table football and boules for adults. You will need a pint after all of that.

The Rosendale can be found at 65 Rosendale Road, London, SE21 8EZ.

Just across the road from Battersea Park, The Prince Albert has a vast selection of guest ales, such as locally brewed Wandle Ale. A warm welcome, real fires, hearty fresh food and even bowls for any visiting dogs. So even if you don’t want a drink, your furry friend probably will.

The Prince Albert can be found at 85 Albert Bridge Rd, London SW11 4PF

The distinctive yellow hue of The Falcon’s exterior is a hint of the jovial nature of this Clapham local and also probably the biggest causes of migraines in South London. Enjoy your favourite tipple over a plate of freshly prepared pub food and a heated game of Scrabble (other board games are available, they have a monster collection), or settle into their snug. The pub garden and outdoor bar is perfect for BBQs in the summer, migraine permitting.

The Falcon can be found at 33 Bedford Road, London, SW4 7SQ.

On the banks of the Thames by Wandsworth Bridge, it would appear at first glance that this is not the most appealing location for one of South West London’s most famous pubs. The Ship has been supplying fine ales, wines and food to its surrounding residents since 1786 when it was founded as a Thameside Waterman’s Inn. Popular with the Made in Chelsea type crowd and especially busy on a Sunday, you could even meet Spencer in there, you lucky people.

Balham Bowls Club was, as the name suggests, originally a Bowls club house. Now reclaimed, the pub has long been favourite of the good people of Balham. The Sunday Roasts are so popular that reserving a table is always a good idea. On the bar a selection of ales is always on rotation and if wine is your tipple, the list is extensive and varied.

The Shipwrights Arms isn’t a natural selection for a list compiling the best pubs in south London, but that’s part of the appeal. A traditional British pub, this South London venue has a distinct local feel considering its location, so close to London Bridge station. The food and drink offering isn’t the best in London, or even in the immediate area, but the pub’s character and interiors are charming, with up to six reasonably priced real ales served alongside a range of keg standards poured at the central island bar.

The Shipwright Arms can be found at 88 Tooley Street, London, SE1 2TF.

Originally known as the Newlands Tavern, The Ivy House was saved from development when local residents clubbed together and set the South London pub up as a co-op. As well as being London’s first co-operatively owned pub, it’s also the first pub in the UK to be listed as an ‘Asset of Community Value’. The huge pub also boasts a beer garden, and has – once again – become renowned for its live music events in recent years, originally a major venue during the mid-1970s pub rock boom, with acts having included the likes of Ian Dury, Elvis Costello, and Joe Strummer. Today, a good beer selection champions local brewers, while food includes pizzas and Sunday roasts of note.

With Goldsmiths College nearby it’s not surprising that some pubs in the area aim to attract a younger crowd. The Amersham Arms is such a place, with an interior that would best be described as shabby chic. It’s a very decent pub though, with a wood-panelled bar area out front and a room out back for live music and events. Pretend you’re an art student for a day, even if you are actually a trainee accountant.

The Amersham Arms can be found at 388 New Cross Road, London SE14 6TY.

The Gowlett still looks like a proper boozer, albeit an antique wood-panelled, minimalist one – which is something of an achievement round here. This place sells some of the best pizza for miles around. Like everywhere in Peckham it’s full of the trendy people with handsome beards. Don’t wear a fake one, they will see straight through it, literally.

Popular with locals and gig-goers alike, The Trinity prides itself on its great beer and cosy atmosphere. Built in 1850, it is named after the Trinity Asylum in Acre Lane which was founded for poor women who professed belief in the Holy Trinity by Thomas Bailey. It has a nice outdoor area, and some tables have their own charcoal fires in the winter, just don’t have one too many and fall in.

The Trinity Arms can be found at 45 Trinity Gardens, London, SW9 8DR.

Close to the site where the Pilgrim Fathers set sail in 1620, The Mayflower claims to be the oldest pub on the River Thames. On a cobbled backstreet, the pub has become a South London institution, particularly cosy with its low ceilings, open fire and candlelit tables. A good selection of real ales are served alongside a menu rooted in comfort food, though the outside (heated) jetty is the main draw, hanging over the Thames, equipped with tables. Just don’t drop your phone, keys, or face mask.

The Mayflower can be found at 117 Rotherhithe Street, London, SE16 4NF.

The Kings Arms, located in the architecturally wonderful backstreets of Waterloo, is a quintessential real ale pub in one of the most historic streets in London. They have nine real ale pumps and serve Thai food. The pub is situated on the quaint and charming Roupell Street, tucked away nicely from the main drags of Waterloo Road.

The Kings Arms can be found at 25 Roupell Street, London, SE1 8TB.

The Camberwell Arms is a place to be seen in Camberwell, an area going through a renaissance at the moment. Hearty English grub, great food and drinks are served here. There’s a long bar around which you can eat supper, though the dining area with its solid wood tables and roaring log fire are just as decadent.

The Camberwell Arms can be found at 65, Camberwell Church Street, London, SE5 8TR.

The Duke of Edinburgh, Brixton

The Duke of Edinburgh is tucked away between Brixton and Clapham North. It boasts one of the biggest beer gardens in South London, with plenty of seating and a large bar and BBQ pit. Inside, there are plenty of comfy sofas, a pool table, Sky Sports and of course a fine range of ale and cask beer on rotation. Good place to watch England lose every game on their outside screens.

The Duke of Edinburgh can be found at 204 Ferndale Road, London, SW9 8AG.

The Canton Arms boozer and gastro pub is very handy for the tube. Think of it as an oasis in the desert between Kennington and Brixton/Clapham. The Canton has a great atmosphere and even better food, so do yourself a favour and jump off tube one stop before Brixton, you are in for a treat. You will not be disappointed.

The Canton Arms can be found at 177 South Lambeth Road, London, SW8 1XP.

Set amongst a parade of exceptional independent restaurants in New Cross and Deptford, The Royal Albert occupies a grade II-listed site on New Cross Road. With a cosy interior festooned with dark wood furnishings and chesterfield sofas, the south London pub serves a constantly changing line up of beers from excellent London breweries, plus a decent Sunday roast. The pub also hosts traditional Jazz nights.

On their original brewing site behind Peckham Rye station, Brick Brewery’s taproom has 20 lines of beers from Brick and guest breweries. While the south London brewery’s core range is particularly strong, they excel with a selection of sour beers, bet sipped outside in the huge alfresco area when the sun is shining. Food is also served by Mikos Gyros.

Although not technically a pub, Mercato Metropolitano is a dining and drinking destination on Newington Causeway, between the Elephant & Castle roundabout and Borough tube station. Touted as ‘London’s first Sustainable Community Market’, the south London venue is home to 40 independent trading partners, serving an array of foods and drinks, with an on-site micro-brewery. Highlights include beers from German Kraft Beer Ltd, plus bao from Wrap Mi, Uzbek lamb noodles from OshPaz, Korean pancakes from Rice On, and crepes of gelato from Badiani.

This article was updated on Thursday 31st March, 2022.