These are the best pubs in North London.

by Jon Hatchman
in Bars, Best of London, Food and Drink 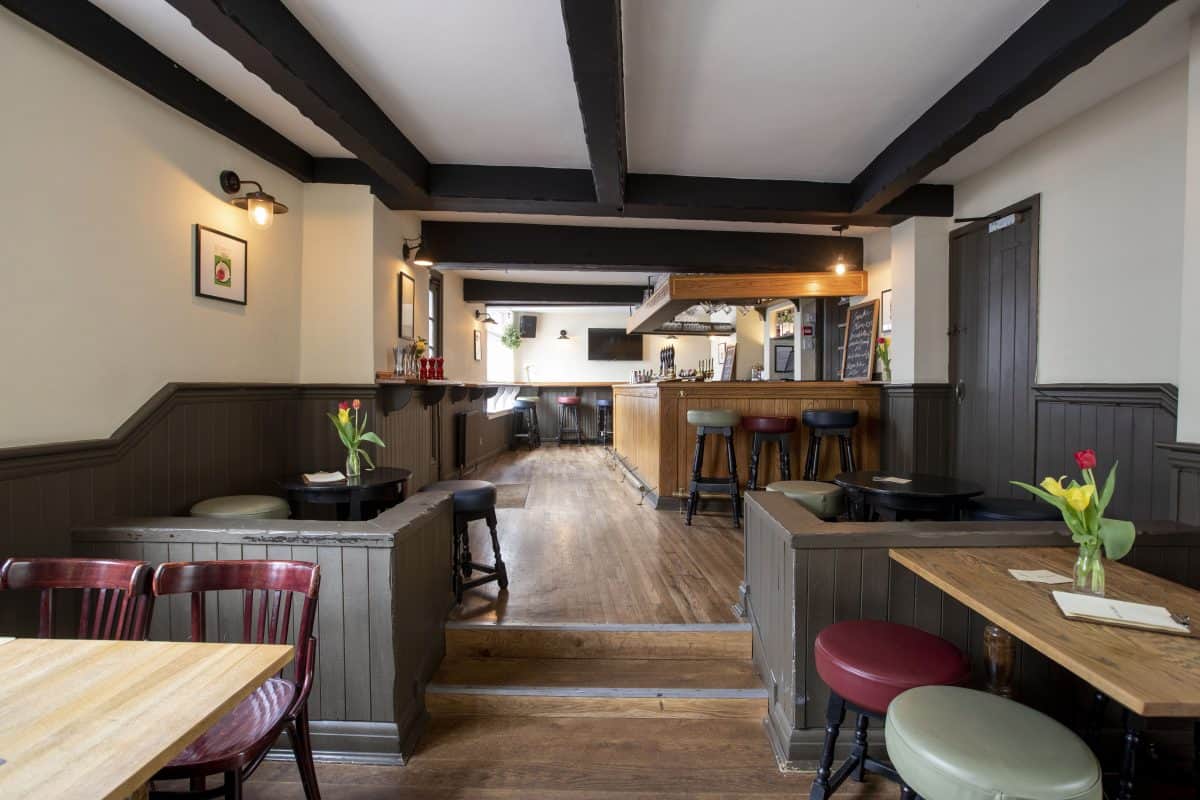 A cornerstone of society, the pub has played a vital role in British history for many centuries. While classic pubs continue to be celebrated (in the UK and beyond), countless establishments have disappeared from our villages, towns, cities, and high streets. Now, more than ever, these institutions rely on our support, most notably due to the extraordinary strain caused by the effects of the coronavirus pandemic. Hundreds of excellent examples continue to operate, however, and they’re in need of as much support as possible. As businesses continue to re-open following the second national lockdown, we pick the best pubs in North London.

One of three Canonbury pubs chosen as inspiration for George Orwell’s The Moon Under Water, The Compton Arms is a 16th century free house. According to the website, The Compton Arms is “a contemporary country pub, hidden in north London”. Recently, the site has also become renowned for its food offering from Four Legs – a pop-up from chefs Jamie Allan, formerly of Hill & Szrok, and Ed Mcllory, formerly of Bao Fitzrovia. Their burger, in particular,  is considered one of London’s finest, comprising a robust Dexter beef patty stuffed inside a glossy brioche bun with American cheese, ‘special sauce’, finely diced onions and homemade pickles.

The Compton Arms can be found at 4 Compton Avenue, London, N1 2XD.

The Southampton Arms’ website reads as though written by Basil Fawlty, but don’t let that put you off. With 18 hand pumps and two keg taps, the North London pub only sells beers and ciders from small independent UK breweries. Walking up Highgate Road, look for the ‘Ale Cider Meat’ sign, which hangs from the building. While the beer selection is nothing short of exceptional, The Southampton Arms still feels very much like a local pub, with an impressive food offering also served, including sausage rolls, pork pies, Scotch eggs, and roast pork baps with crackling, apple sauce, and mustard.

The Southampton Arms can be found at 139 Highgate Road, London, NW5 1LE.

A neighbourhood North London pub, The Drapers Arms is particularly cherished for its food offering. Past the emerald green bar, the pub has a slightly more formal dining room towards the back of the venue, with a daily changing menu championing dishes which strike the middle ground between rustic pub fare and thoughtful, modern technique – surprisingly never pretentious. The pub also has a sizeable wine list of note, curated by owner Nick Gibson.

The Drapers Arms can be found at 44 Barnsbury Street, London, N1 1ER.

Just behind Finsbury Park, The Faltering Fullback is an Irish pub with a prominent focus on sport. Inside the ivy-draped pub, the main room has a horseshoe bar and is festooned with sporting regalia, which hangs from the ceiling. While the drinks selection is fair – and reasonably priced – and fine Thai food is served daily, the multi-level garden is the North London pub’s main draw, with most seats heated and covered.

The Faltering Fullback can be found at 19 Perth Road, London, N4 3HB.

Dubbed “most authentic Irish pub in the world outside Ireland”, by the Irish Times, The Auld Shillelagh has been operating since the early 1990s. Widely agreed to serve some of the best Guinness in North London, the skinny Church Street pub also showcases live sport and is complete with a surprisingly spacious beer garden.

Once the final stop for 18th century coaches heading north on the Highgate Road, out of London, The Bull & Last has finally re-opened after a long period of closure. Sympathetically refurbished, the pub is now brighter and significantly fresher, with a strong focus on food that allows the pub to stand out as a dining destination, described as classic British cuisine with a continental twist.

One of the area’s most culturally significant live music venues, The Dublin Castle hosted early gigs from the likes of Madness, Blur, Amy Winehouse, and The Libertines. Close to Camden Town tube, the venue serves a fair selection of beers, ciders and wines, but the music culture is the main draw, as well as the unpretentious local pub charm, which is (rightly) inescapable at this North London institution.

The Dublin Castle can be found at 94 Parkway, London NW1 7AN.

The Duke of Hamilton, Hampstead

After a community group launched a successful campaign in 2015 to make The Duke of Hamilton an ‘Asset of Community Value’, the landlord barred 800 members – clearly not keen on the idea. Today, those locals are welcome, with the North London pub having re-launched at the start of last year, under new management. Once famed as a favourite among actors such as Richard Burton, Peter O’Toole, and Oliver Reed, the pub was first opened in 1721. Some original features have been retained, namely the central bar, with a good selection of beers served alongside the food menu which champions elevated takes on pub classics. The Duke of Hamilton is also home to The Hampstead Jazz Club, located in the pub’s cellar.

With a prominent focus on serving a large, regularly changing selection of craft beers, real ales and ciders, The Jolly Butchers has been sensitively restored. On the corner of Stoke Newington High Street and Graham Street, the large room is adorned with a bar that stretches along one side of the pub, with an open kitchen, church pew seating, and a thin counter facing the window, perfect for watching the world go by. In addition to its broad selection of beers served on draught, an interesting range of bottled beers are also available. Moreover, The Jolly Butchers’ Sunday roasts are particularly noteworthy.

Threatened with closure at the turn of the century, The Pineapple is now Grade-II listed, following a community campaign to save the local North London pub built in the 1860s. More recently, Keir Starmer has even gone as far as calling The Pineapple the “best pub in Britain”. Alongside a constantly changing selection of craft ales, the pub kitchen serves good Thai food, and a compact beer garden is also on hand.

The Pineapple can be found at 51 Leverton Street, London, NW5 2NX.

A small residential pub with a focus on the local community, The Windsor Castle’s size makes it easier for the space to accomplish a lively atmosphere where other, larger venues would struggle. Given the local community spirit, drinks are reasonably priced, and regular poker and darts nights are hosted.

Originally built in the 1790s, The Holly Bush began life as a house before being used as an Assembly Rooms, and then a pub as of 1928. A short walk from Hampstead Heath, the Fuller’s pub has a gorgeous exterior, with a handful of outdoor seats perfect for summer evening visits. Inside, real ale drinkers are considered, with 10 tap options and five cask ales on rotation. As for the food, the North London pub takes its menu seriously. Think courgette bread and butter pudding; butter-poached Cornish lemon sole; and sticky toffee pudding with Laverstoke buffalo milk vanilla ice cream.

First opened in 1899, The Salisbury’s striking facade is classified as French Renaissance style. Inside, art nouveau motifs adorn the huge space, which has been used for filming, featuring in films such as Chaplin, The Long Good Friday, and Spider. To drink, the pub offers a good range of spirits and regularly-changing beers, with prominent focus on representing local breweries.

The Salisbury can be found at 1 Grand Parade, Green Lanes, London N4 1JX.

A backstreet North London pub, The Hemingford Arms is fronted with a beautiful, year-round floral display, while the inside is festooned with quirky curios. As for the drinks offering, the selection is fairly standard, though a selection of cask ales are offered, while Thai food is also served by Thai 2gether Catering.

The Hemingford Arms can be found at 158 Hemingford Road, London, N1 1DF.

While The Wenlock Arms is technically an East-End pub, it’s been named North London Pub of the Year by the local CAMRA brand on multiple occasions, considering its N1 postcode. One owned by the nearby Wenlock Brewery, the pub has been open since 1787, particularly renowned for its drinks offering, with a constantly changing selection of 10 cask ales, 20 keg lines, and seven real ciders.

The Wenlock Arms can be found at 26 Wenlock Road, London, N1 7TA.

Believed to have been built in 1858, The Spaniard’s Inn boasts plenty of history. With his father said to have been its landlord, Dick Turpin is thought to have once been a regular, as well as Charles Dickens (who mentioned the pub in The Pickwick Papers), Bram Stoker (who allegedly borrowed one of the pub’s ghost stories for Dracula), and John Keats, who’s said to have written Ode to a Nightingale in the beer garden. Roughly equidistant between Hampstead, Golders Green, and Highgate stations, it’s not the easiest pub to reach on the tube, but is ideal for a pit stop while visiting Hampstead Heath and Kenwood House (or, of course, if you live nearby). The food menu adheres to a parade of pub classics, but with the odd contemporary flourish, while a decent selection of real ales are also offered.

The Spaniard’s Inn can be found at Spaniards Road, London, NW3 7JJ.

A family and dog-friendly pub on the corner of Wood Street, The Black Horse is also home to the Barnet Brewery. From a site on the pub’s premises, the microbrewery produces a selection of real ales each week, brewed with the original tanks from the Federation Brewery in Newcastle Upon Tyne, sourced from the Iceni Brewery in Norfolk. Some of Barnet Brewery’s beers are available from the bar’s eight hand-pumps alongside other regional and national beers. The North London pub has a prominent food focus, renowned for its Sunday roast, and also boasts a decent beer garden with a covered patio area.

The Black Horse can be found at 80 Wood Street, Barnet, EN5 4BW.

Having moved 250 metres up the road from the original site, the Royal Oak is a large and typically atmospheric local pub. Think Smooth Flow over traditional ales, but drinks are surprisingly reasonably priced compared to other neighbouring pubs. They’ve also got two dart boards and a jukebox.

An Irish pub near Upper Holloway Overground, The Floirin is a classical corner pub built around 1880. Inside, the square room has a pool table at its centre – ultimately an ode to old fashioned pubs with velour seats and fruit machines. Real ales aren’t available, but a typical line-up of draught beers are offered. Nearby Archway Kebab is also well worth a visit for a post-pint falafel wrap.

Just off Tottenham High Road, The Beehive was awarded CAMRA North London pub of the season Winter 2014/15, soon after re-opening under new management. Built in 1927, the “Brewer’s Tudor” style pub retains many of its original fixtures, as well as offering a games room with a pool table, darts board, and board games. With the local area home to a selection of world-class breweries, local beers and real ales are championed here, from the likes of Beavertown, Redemption, Five Points, and One Mile End. The pub is also well-known for its decked, partially covered terrace with screens and an outdoor bar on Spurs match days.

The Beehive can be found at Stoneleigh Road, London, N17 9BQ.