Three years ago, N.K. Jemisin became the first black woman to win one of science fiction’s most prestigious prizes, the Hugo for best novel. She won it again last year, for the second in the series The Obelisk Gate, and this year became the first person to win three Best Novel Hugo awards in a […]

by Ben Gelblum
in Entertainment, Literature, Must Reads, Trending 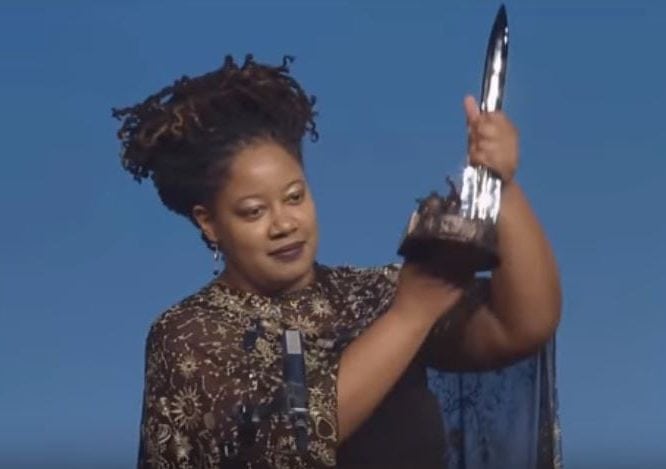 Three years ago, N.K. Jemisin became the first black woman to win one of science fiction’s most prestigious prizes, the Hugo for best novel.

She won it again last year, for the second in the series The Obelisk Gate, and this year became the first person to win three Best Novel Hugo awards in a row, and the first to win for every book in a series.

As she accepted the Hugo award for best novel for The Stone Sky, the third book in The Broken Earth trilogy, the Queen of fantasy fiction not only made history, but made a historic speech at WorldCon 76 in San Jose that is truly inspiring for anyone who has had to contend with discrimination or naysayers.

Holding the rocket-shaped award in front of a cheering crowd, the standard-bearer against discrimination said the award was a “rocket-shaped finger” to all the racist critics and sceptics who wanted to put her in a box.

“This is the year in which I get to smile at all of those naysayers: every single mediocre, insecure wannabe who fixes their mouth to suggest that I do not belong on this stage, that people like me cannot possibly have earned such an honour, and that when they win it’s meritocracy, but when we win it’s identity politics,” she told a cheering crowd.

“I get to smile at those people and lift a massive shining rocket-shaped finger in their direction.”

Needless to say the writer’s speech is going viral and is well worth a watch or read in full – below. Whether you are an aspiring writer or not, it is truly inspirational:

“This has been a hard year, hasn’t it? A hard few years. A hard century. For some of us, things have always been hard. I wrote the Broken Earth trilogy to speak to that struggle, and what it takes just to live, let alone thrive, in a world that seems determined to break you. A world of people who constantly question your competence, your relevance, your very existence.

“I get a lot of questions about where the themes of the Broken Earth trilogy come from. I think it’s pretty obvious that I’m drawing on the human history of structural oppression, as well as my feelings about this moment in American history. What may be less obvious, though, is how much of the story derives from my feelings about science fiction and fantasy. Then again, SFF is a microcosm of the wider world, in no way rarefied from the world’s pettiness or prejudice.

“But another thing I tried to touch on in the Broken Earth is that life in a hard world is never just the struggle. Life is family, blood and found. Life is those allies who prove themselves worthy by actions and not just talk. Life means celebrating every victory, no matter how small.

“So as I stand here before you, beneath these lights, I want you to remember that 2018 is also a good year. This is a year in which records have been set. A year in which even the most privilege-blindered of us has been forced to acknowledge that the world is broken and needs fixing—and that’s a good thing!

“Acknowledging the problem is the first step toward fixing it. I look to science fiction and fantasy as the aspirational drive of the Zeitgeist: we creators are the engineers of possibility. And as this genre finally, however grudgingly, acknowledges that the dreams of the marginalized matter and that all of us have a future, so will go the world. – Soon, I hope.

“And yes, there will be naysayers. I know that I am here on this stage, accepting this award, for pretty much the same reason as every previous Best Novel winner: because I worked my ass off.

“I have poured my pain onto paper when I could not afford therapy. I have studied works of literature that range widely and dig deeply, to learn what I could and refine my voice.

“I have written a Million Words of Crap and probably a Million More of Meh.

“But beyond that, I have smiled and nodded while well-meaning magazine editors advised me to tone down my allegories and anger. (I didn’t.)

“I have gritted my teeth while an established professional writer went on a ten-minute tirade at me—as a proxy for basically all black people—for mentioning underrepresentation in the sciences. I have kept writing even though my first novel, The Killing Moon, was initially rejected on the assumption that only black people would ever possibly want to read the work of a black writer.

“I have raised my voice to talk back over fellow panelists who tried to talk over me about my own damn life. I have fought myself, and the little voice inside me that constantly, still, whispers that I should just keep my head down and shut up and let the real writers talk.

“But this is the year in which I get to smile at all of those naysayers—every single mediocre insecure wannabe who fixes their mouth to suggest that I do not belong on this stage, that people like me cannot possibly have earned such an honour, that when they win it it’s meritocracy but when we win it it’s “identity politics” — I get to smile at those people, and lift a massive, shining, rocket-shaped middle finger in their direction.

“How many of y’all saw Black Panther? Probably my favourite part of it is actually Kendrick Lamar’s theme song, “All the Stars.” The chorus of it is “This may be the night that my dreams might let me know: all the stars are closer.”

“Let 2018 be the year that the stars came closer for all of us. The stars are ours. Thank you.”

N.K. Jemisin’s short story collection How Long ‘Til Black Future Month? and the full box set of The Broken Earth trilogy are published this autumn.