By Harry Bedford This week sees the twentieth anniversary of the American sitcom Friends exploding onto our screens. The show ran for ten years from 1994 until 2004 and was based around six friends living in New York in their late twenties and early thirties. Created by David Crane and Marta Kauffman, it is one […] 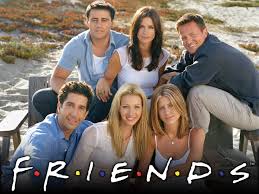 This week sees the twentieth anniversary of the American sitcom Friends exploding onto our screens. The show ran for ten years from 1994 until 2004 and was based around six friends living in New York in their late twenties and early thirties. Created by David Crane and Marta Kauffman, it is one of the most popular television series in the history of the medium and has attracted audiences world-wide. The success of the show was also exemplified by the amount of guest appearances it had from Hollywood royalty, everyone from Robin Williams to Bruce Willis popped into Central Perk for a quick coffee.

Can you honestly believe that it has been twenty years since Joey, Rachel, Chandler, Monica, Phoebe and Ross all took to our screens for the first time? It really doesn’t feel like it. Watch ER and even Frasier, both starting around the same time, and they do feel like they are 20 years old. The clothing styles, the sets, the acting all appear slightly dated. But that doesn’t seem to be the case with Friends. So what is the difference?

First and foremost, timelessness. Like it or not it’s difficult to disagree that Friends was the greatest sitcom ever created. Some may argue Seinfeld or Cheers but these just don’t have the accessibility and longevity of the coffeehouse-centred TV show. It pulled in millions of viewers across the globe each week and by the end the actors were demanding million dollar paycheques for each 20 minute episode. It not only gave us gripping storylines and laugh-out-loud jokes, it presented the perfect 20-something lifestyle. Living with or close by to your five best pals in one of the greatest cities on Earth, spending as much time as possible together. When we watch Friends we don’t just enjoy it, we envy it. We want to hang out at Central Perk with these six people.

Secondly, well, Friends has never really gone away. Being born in 1989 I have little memory of a world without the Manhattan-based sitcom. It seems like it’s been on my television screen forever. And ever since it finished it has been repeated constantly. Comedy Central in Britain may as well be the Friends channel and E4 was married to the sitcom for many a year. We watch, we never get tired of the storylines, we never fail to laugh at the jokes, we tune in and hang out.