“Come up here but be careful, it’s in striking position,” our guide explains. Christian, a stout little man with a jolly face, bucket hat and offbeat sense of humour, is  referring to the deadly fluorescent green snake coiled up on a dinner plate-sized leaf he’s shining a torch at. “I’m okay here, thanks,” I whisper […] 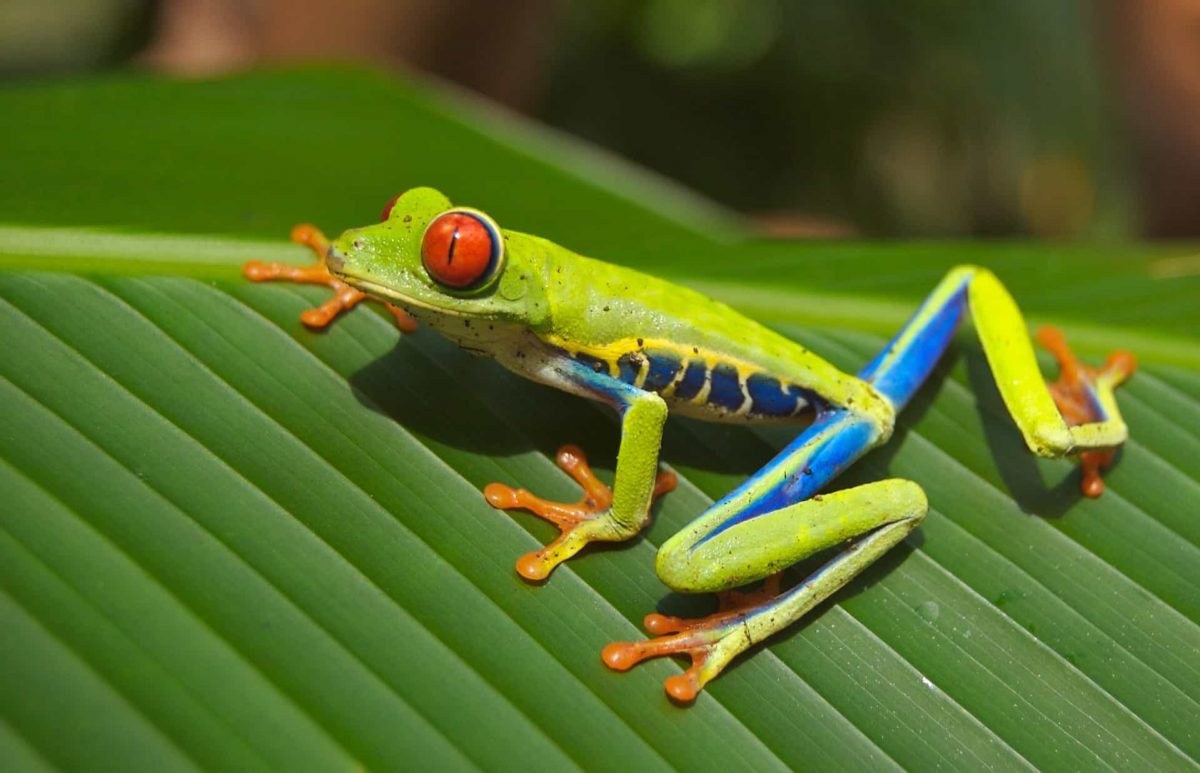 “Come up here but be careful, it’s in striking position,” our guide explains. Christian, a stout little man with a jolly face, bucket hat and offbeat sense of humour, is  referring to the deadly fluorescent green snake coiled up on a dinner plate-sized leaf he’s shining a torch at. “I’m okay here, thanks,” I whisper nervously taking a few steps in the opposite direction. “Come on! Come here, it’s fine!” Christian, standing a few metres away, shouts enthusiastically. I make my way slowly towards him.

We’re in the middle of a forest in Costa Rica,  it’s pitch black and the nearest hospital, I imagine, is a canny distance away. I’m reassured, however, that the side-striped palm pit viper I’m now creeping towards is unlikely to kill. But it could, and that’s enough to send my fight or flight mechanism into overdrive. I stare nervously at its slender nuclear green body, which is frozen in an S shape. Its eyes are transfixed on Christian and I. Staring at us like we’ve just used its firstborn as a skipping rope (we haven’t).  “Oh yeah, isn’t he beautiful,” I say nervously taking a few steps back towards safety, my breath held, my abs tight and my legs trembling.

Now a safe distance away, I take a deep breath and observe my surroundings. The air is moist and chilly. The black sky is sprinkled with stars which flicker through the forest’s canopy. And the only thing we can hear, but for Christian’s running commentary, is an orchestra of crickets chattering above.  We’re in the Monteverde Wildlife Refuge in Costa Rica midway through a two-hour guided night walk. The reserve, which has been going for over twenty years, is ran by a former cattle farming family committed to conservation. The night walks they offer aim to give visitors the chance to see Costa Rica’s wildlife in a different light.

As we wander back towards the main path, I ask Christian what would have happened if the snake had bitten me? “You’d need an anti-venom, pretty quickly. But the problem is, they’d first have to make sure it wasn’t a warning bite because warning bites don’t give off any venom.” He says casually. “And what would happen if they give me an injection if it was a warning bite?” I ask. “You’d probably die from the anti-venom,” he says far too casually as we skip through the forest.

We’re here to observe nocturnal animals under the cover of darkness, and so far it’s going well. An hour in and we’ve already seen several bats, some pretty butterflies, an army of leaf cutter ants and a deadly snake. But it’s hardly surprising. Costa Rica is one of the most bio-diverse countries in the world. Despite accounting for 0.03% of the earth’s surface, it contains around 5% of the worlds’ biodiversity. Thankfully, it’s also a nation well-known for its commitment to nature and so 25% of the country is protected.

The Central American country, of which 98 per cent of its energy is renewable, received the Champions of Earth award, the UN’s highest environmental honour, just last year for its commitment to protecting the planet. This tiny nation is an animal lover’s dream, too,  blessed with 850 different bird and 205 mammal species, as well as 12 ecozones, 28 national parks and 58 wildlife refuges, like this one. The 55 acre biological corridor lies between the Pacific Dry Forest and Monteverde’s Cloud Forest and is home to wild cats, various species of birds (quetzals, toucans, bellbirds) monkeys and sloths, as we soon find out.

“Look up there,” Christian says pointing up towards a cable that runs around the perimeter of the forest as he plants his tripod-mounted binoculars on the ground. As he trains his torch on area, gasps go up from our group. It’s a two-toed sloth clinging to a tree with a cub wrapped around its midriff. Other groups begin to stop and so the thick furry mammal decides to get out of the spotlight, quite literally. We watch as it dangles then drops from tree to cable and, hanging backwards with its hands and feet wrapped around the cable, like an SAS soldier, slowly creeps away into the night.

“It’s an interesting way to see the forest. You can visit by day, but I think it’s better at night because you can see the animals as you wouldn’t usually see them,” Christian explains.

He’s not wrong. I’ve never seen a sleeping bird until tonight. I’m not sure if you have either, but if not, they look like the kind of stuffed animal you find in a British country pub. We see a sabre winged hummingbird, brown jays and an orange-bellied trogon looking peaceful  perched on branches completely motionless.

Around twenty minutes later, Christian leads us down another dark path as light raindrops fall from through the canopy above. “What I’m going to show you now is a secret path. See if you can spot anything.” he says heading down a staircase made of sandbags.

As we reach the bottom, there’s a small bubbling stream. “Wait here one moment,” Christian says as he shines his light on a small rock pool. “Aha there it is!!” he says delightedly. “One at a time, come and take a look,” he says, this time quietly as if not wanting to disturb.

Sat on a smooth rock the size of a sack of potatoes is a tiny frog no bigger than a golf ball. Either Christian is a maverick guide, or the reptile rarely moves from this area as it’s almost impossible to see until you’re up close with a bright light. Again, it’s a luminous green with big red eyes.

Once the group have taken turns taking pictures and asking questions, we head back up to the main path. But before we do, Christian asks us to take a moment to close our eyes and listen to the forest. The sounds of crickets amplify with our eyes closed, it’s like someone has turned the speaker system up. There’re hardly any other sounds but for an occasional dropping branch or bustle coming from a nearby bush. It’s nature’s jazz concert.

And as we make our way towards the end of the trail a little later, Christian spots something high up in a tree. Its white face pops from behind a branch as the rest of the group strain our eyes to see. “Look a capuchin monkey. Take a look through the telescope” he says excitedly.

Sure enough there it is, a cheeky monkey cradling a tiny baby (something we only discover on reviewing a video of it later). It seems at peace in a way you don’t expect to see monkeys. “This is very special; these monkeys are usually very active, so you don’t often see them as this” Christian explains.

And on that, we head back through the forest to the cafe for a coffee, enlightened by numerous encounters with animals we’d seldom get so see, or want to see, so closely during the day.

Where to stay in Costa Rica