Cavallo, of Adelaide United, is the first known male top-flight professional footballer to come out as gay. 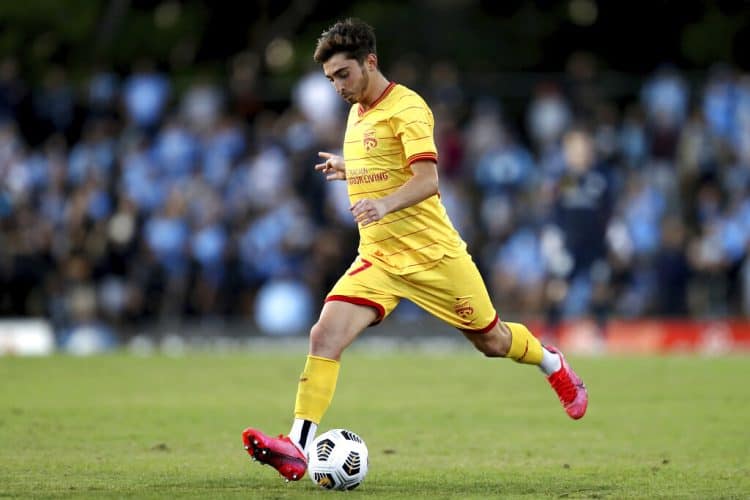 Josh Cavallo of the Adelaide United controls the ball during an A-League match between Sydney FC and Adelaide United in Sydney, on April 18, 2021. Cavallo came out in a series of social media posts and made comments about his experience in a video released Wednesday, Oct. 27, 2021, by his A-League club. Cavallo says he's the first active male player in the A-League to come out as gay. (Brendon Thorne/AAP Image via AP)

A-League midfielder Josh Cavallo has become the first known current male top-flight professional footballer in the world to come out as gay – and he says he knows that other players are “living in silence”.

Cavallo on Wednesday announced on social media that he was “ready to speak about something personal that I’m finally comfortable to talk about in my life” – and his club, Adelaide United, shared an emotional personal video which has swiftly made headlines and won plaudits.

“It’s been a journey to get to this point in my life, but I couldn’t be happier with my decision to come out,” he wrote. “I have been fighting my sexuality for over six years now, and I’m glad I can put that to rest.

“For the people that know me personally, you’ll know I’m a private person. Growing up, I always felt the need to hide myself because I was ashamed. Ashamed I would never be able to do what I loved and be gay. Hiding who I truly am, to pursue a dream I always wished for as a kid, to play football and be treated equally never felt like a reality.

“Being a gay closeted footballer, I’ve had to learn to mask my feelings in order to fit the mould of a professional footballer. Growing up being gay and playing football were just two worlds that hadn’t crossed paths before. I’ve lived my life assuming that this was a topic never to be spoken about.”

There are just a handful of openly gay male footballers – none of whom play in the top flight.

Among the most high profile is Thomas Hitzlsperger – the German former Aston Villa player – but he waited until the year after he retired in 2013 before coming out publicly.

Cavallo said he had been worried that coming out would negatively impact his career, adding that he knew other players were “living in silence”.

“I want to help change this, to show that everyone is welcome in the game of football, and deserves the right to be their authentic self,” he wrote.

“It is astonishing to know that there are currently no gay professional footballers who are out and actively playing, not only in Australia, but around the world. Hopefully this will change in the near future.

“I hope that in sharing who I am, I can show others who identify as LGBTQ+ that they are welcome in the football community. As the game of football keeps expanding, I want to help evolve the game even further, and let other players in my situation feel that they’re not alone.”

“Before Josh spoke with me, it was clear he was living with an incredible burden and unimaginable pain. To see Josh today, with that weight lifted off his shoulders, it makes me proud of how brave a man he is.

“Josh’s mental health and wellbeing is the most important thing to us as his coaches and teammates. Josh will always be Josh to us.”

Related: The Treasury wants to cut tuition fees to save billions in unpaid debt