A rare tasting menu only restaurant of note. 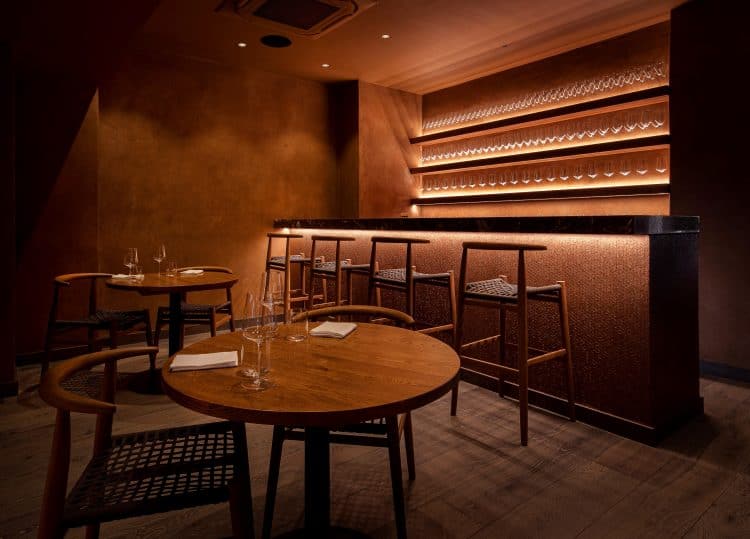 When Akoko opened last October, the launch was greeted with plenty of discussion suggesting the concept of West African food was completely new to London. But look beyond zone one of the tube map and food from West African nations are easy enough to find. The Old Kent Road, for instance, is home to countless excellent restaurants showcasing the foods of almost as many countries. Akoko is absolutely not one of these family-run restaurants catering to specific communities, but it can be argued that it serves West African cuisine in a unique, “elevated” way, as was the intention from day one.

Following the success of restaurants such as Ikoyi – which serves West African-inspired food and has gained a Michelin star – and Chuku’s in Tottenham, Akoko is very much a fine dining restaurant, launched as a project from first-time restaurateur Aji Akokomi with Head Chef William JM Chilila. Thanks to a staff shortage that’s currently devastating the industry, however, Chilila left soon after the restaurant opened, now replaced by Theo Clench, formerly of Michelin-starred Portland, who has spent months working alongside Akokomi, learning the intricacies and foundations of West African dishes.

On his appointment as Executive Chef at Akoko, Theo Clench said: “Learning new skills from Aji has been such a fantastic experience. I am constantly learning and perfecting dishes using traditional recipes, innovative techniques and ingredients that I have fallen in love with. Every day is a challenge and a learning experience, and as a chef, that’s what keeps us passionate and driven in our jobs. The spicing of the dishes is such a delicate balance, and I’m using spices that taste like nothing I’ve tried before that bring incredible depth and flavour to each dish – Grains of Paradise, Grains of Selim, Calabash Nutmeg and Scotch Bonnets to name just a few.”

Owner, Aji Akokomi added: “I wanted to ensure that my guests always have the opportunity to try ingredients and flavours they may not have known before. I thought the best way to do this would be to offer only set menus, that way each guest is given the complete Akoko experience.”

A rare tasting menu only restaurant of note, Akoko offers a six or nine course tasting menu which never feels too long or ostentatious. It’s also served in a gorgeous, unflashy setting with a warm terracotta palette, wood accents, African art and low lighting, with tables facing the open kitchen. Service, on the other hand, is warm and informal yet polished, and all wines served are natural, organic and sustainable, sourced from small producers.

During a recent visit, dinner began with a trio of snacks, best of which was the savoury bofrot: a bite-sized doughnut filled with braised ox cheek, dusted with palate-jolting Scotch bonnet powder. A Carlingford oyster followed, cooked in its shell over hot coals, then covered with a fruity Gambian stew, finished with a flurry of pickled cucumber ‘dust’. Then a crackle-crusted roll of Guinness bread served with a rocher of chicken-laced yassa butter inspired by the Senegalese stew.

Akoko’s contemporary take on ofe nsala featured a plump Isle of Mull scallop in place of catfish in a shallow puddle of shito and rich peanut sauce; while a tranche of Cornish turbot was slow-cooked with caviar, charcoal oil, and an outrageously delicious fish bone caramel sauce.

Even better was a dish of carrot terrine, made by slow cooking compressed ribbons of carrot. It looks similar to Quality Chop House’s famous confit potatoes, but was far softer with slight sweetness balanced by the smoky, delicately sliced Ivorian aubergine sauce. The terrine was also joined by a bowl of jollof rice, billowing with wood smoke: the jewel in the dish’s proverbial crown, only bettered by the suya.

“Easily one of the best things I’ve eaten this year.”

Seemingly one of the more simple dishes on the Akoko menu, the suya featured skewered breast of hogget strips cooked over coals. As well as being marinated in traditional suya spices, it was also served with a pinch on the side, to be added to taste as an accompaniment to the profoundly rich, unctuous hogget fat that can only be described as mouth-watering – one of the most remarkably emetic phrases in food writing. It’s easily one of the best things I’ve eaten this year.

A loin of perfectly pink fallow deer followed, with barbecued kale providing interesting depth of flavour and texture, though I’d have liked more of the egusi (melon seed stew) which appeared as a small smear, almost as an afterthought. Far better was the sweet, sticky melon seed tart with its brittle cap, complete with burnt milk ice cream and a swirl of uda caramel. A true celebration of technique and ingredients, like everything else served at Akoko – championing bold flavours working in perfect harmony with no bullies.

Akoko can be found at 21 Berners Street, London, W1T 3LP.