The justice secretary is reportedly devising a "mechanism" to allow the government to introduce ad hoc legislation to "correct" court judgements that ministers believe are "incorrect". 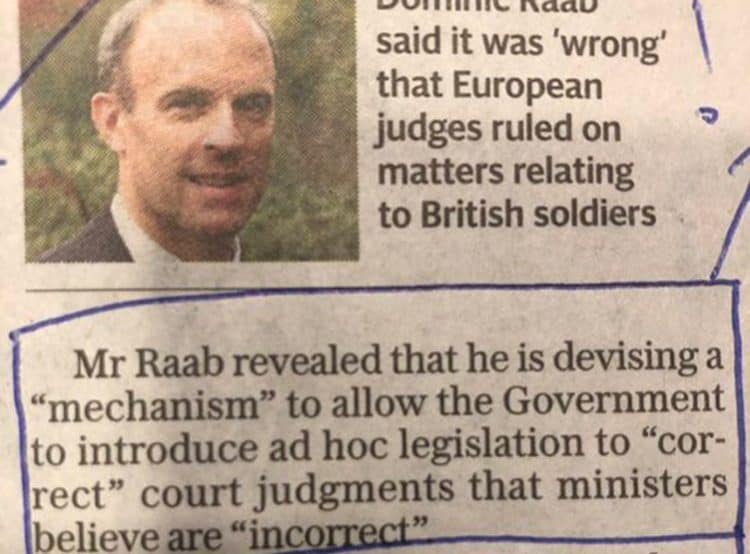 Moves by Dominic Raab that could allow the government to introduce legislation to ‘correct’ court judgments has provoked outrage online.

In an interview with The Telegraph he revealed that he is devising a “mechanism” to allow the government to introduce ad hoc legislation to “correct” court judgements that ministers believe are “incorrect”.

The piece, since shared by Andrew Adonis, has provoked outrage online.

Sacha Deshmukh, Amnesty International UK’s CEO, said: “The Human Rights Act has been key to some of the biggest justice fights over the last 30 years – from Hillsborough and the Mid Staffs hospital deaths, to years of human rights violations against women activists in the Spycops scandal.

“The deeply unacceptable delay to setting up a public inquiry into the government’s handling of the Covid pandemic is just one example of why the Human Rights Act is so important.

“The Human Rights Act is a key protection against an overmighty government – and we need it now more than ever.

“Politicians should not be removing the rights of ordinary people with the stroke of a pen, whilst giving evermore powers to the police and protecting members of the establishment from proper scrutiny. That’s the complete opposite of justice.”

Shadow justice secretary David Lammy said: “After 11 years of Tory government, court backlogs have reached record levels, violence and self-harm in prisons have soared, rape convictions have plummeted, and many women have lost confidence in the criminal justice system.

“Yet instead of addressing any of these problems, the new Justice Secretary chose to focus on vague threats to take away ordinary people’s rights.”

Elsewhere the reactions have been similarly fierce.