"A room full of 50 odd Tories drinking champagne, discussing their second jobs xmas bonuses and laughing at the poor, isn’t my idea of a party." 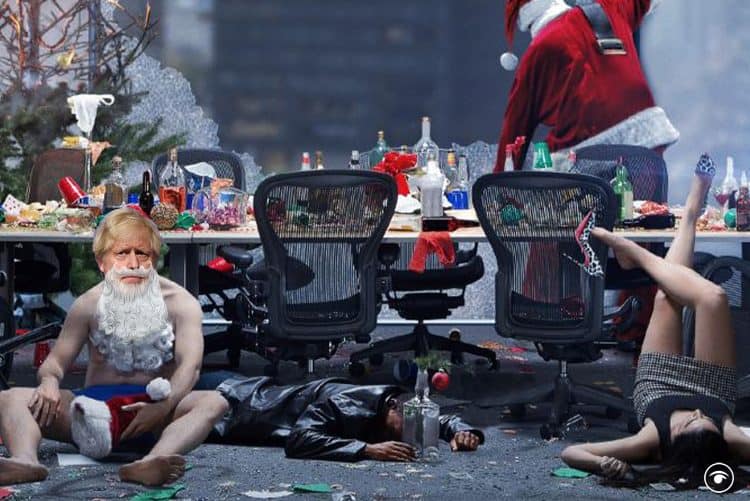 How was your office party last year? Did you lose your job? Can’t really photocopy your arse over a zoom call, so presumably not.

But one person who should have lost his job during a Christmas party last year was our very own prime minister as he boogied away in Downing Street while we all sat on video calls making the smallest of small talk.

‘Dodgy internet connection’ was the new ‘got to get the last tube’ excuse of choice to extricate yourself from the proceedings.

During today’s PMQs Keir Starmer demanded to know if the PM would admit to his illegal soiree.

He didn’t, of course, telling the House this was a year ago, move on. Tell that to the people who passed away 12 months ago and those who couldn’t see their families. For most people, it’s still fresh in their memory.

The PM claimed the Labour leader was ‘playing politics’ and said questions about the Christmas bash were ‘frivolous.’ He then went on to mention, numerous times, that Angela Rayner isn’t invited to Starmer’s Xmas party this year. You couldn’t make it up.

He was accusing Labour of ‘factional infighting’, which is daring for a party leader who has spent a month throwing drinks parties for his own MPs to persuade them not to topple him.

Returning to the illicit jamboree last winter, Number 10 will probably claim it wasn’t technically a “party”, and to be fair they probably have a point.

A room full of 50 odd Tories drinking champagne, discussing their second jobs, Christmas bonuses and laughing at the poor isn’t my idea of good fun, it’s my idea of hell, unlike Steve Baker’s idea of eternal damnation, which is having to wear a mask in Waitrose.

Starmer said: “The PM doesn’t deny there was a Christmas party last year and says no rules were broken. Both things can’t be true.” Well they can in Boris world, a fictional land that makes Peppa Pig look like Thomas Aquinas.

Keir has two attack lines these days, first is one rule for them and the other one is broken promises.

It was quite apt as it was revealed just before PMQs that Jacob Rees-Mogg had been reported to Westminster’s sleaze watchdog he recently tried to ban.

Interestingly Mogg was wearing a mask, but that might be to hide the shame. Maybe that is the way to persuade Tories to wear masks?

On that subject there were a number of ‘Libertarian’’ Conservative MPs on the backbenches not wearing face coverings today. More shame from the shameless.

In terms of broken promises, the Labour leader wondered how these new 40 hospitals Johnson promised were going, especially as they have been red-flagged by his own Government.

It has been pretty obvious for a while that all these new hospitals are not being built. It is now confirmed that a refurb now counts as a ‘new’ hospital.

If you fixed the vending machine at Chorley’s’s A & E does that count? To be fair it is lucky the Lancashire town emergency department still exists after the Government tried to close it down last year.

Next up was Ian Blackford, who the Tories basically openly mock when he talks. The SNP man asked the same questions and basically said the same stuff as Starmer.

Not sure a rainbow coalition is going to happen when they can’t check what questions they are going to ask, once a week.

What was most troubling was the calls from Tory MPs to repeal the Human Rights Act to which the PM promised to review.

With that fresh in the mind, Labour’s Imran Hussain stood and railed against the Nationality and Borders Bill, which could give the government power to strip individuals of their British citizenship without warning.

He said everyone from a BAME background is asking “when is he coming for me?”.

As the Government makes it legal to push dinghy’s back into treacherous water, the PM is probably right, an illegal party a year ago is neither here nor there. The same situation migrants find themself in as their feeble craft begins to sink between England and France.