“Shutting parliament during the gravest national crisis since the war is an act of grotesque cowardice; but history will remember the infamy and those responsible for it with indelible contempt,” historian Dr Schama wrote. 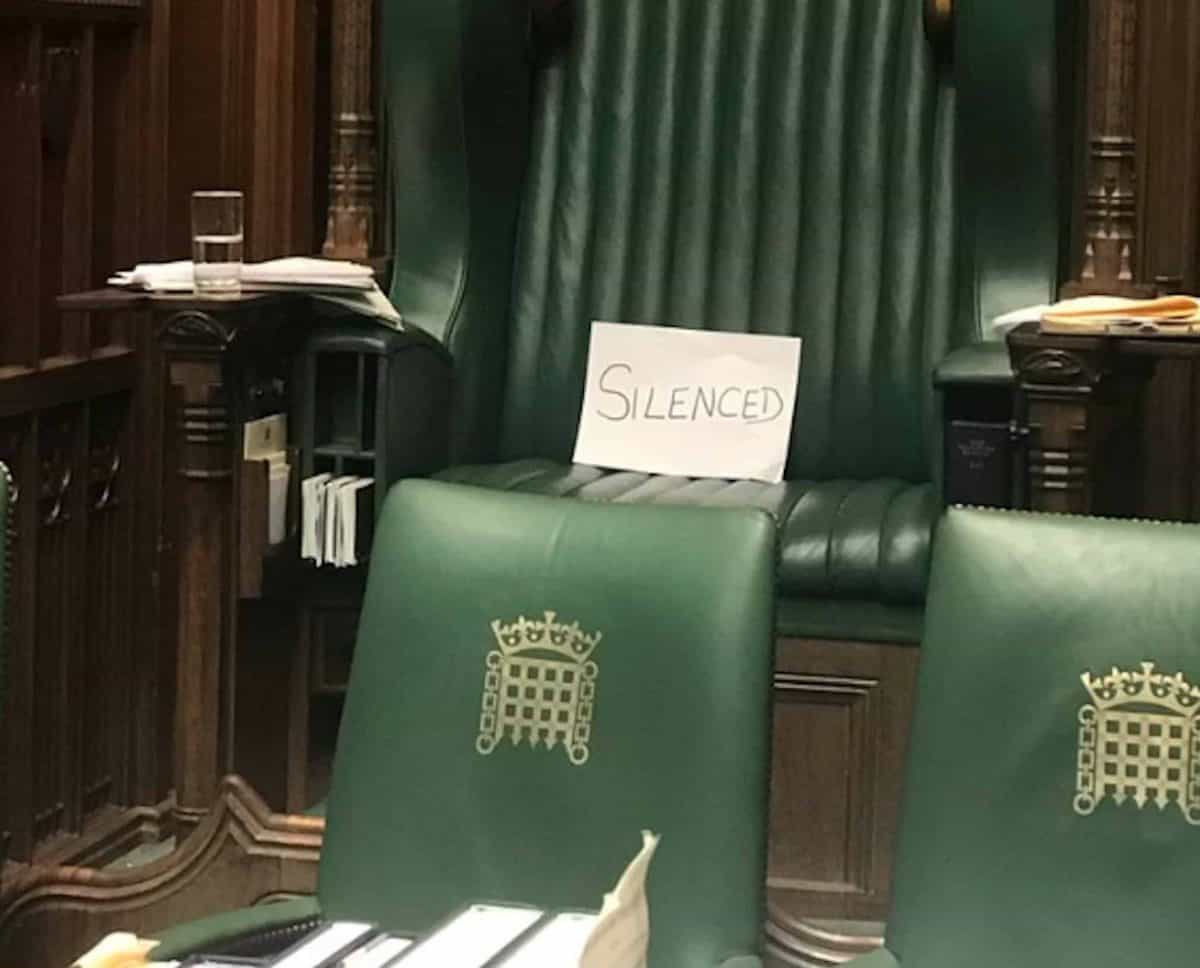 After Boris Johnson was defeated in his first six votes by MPs there were chaotic scenes as MPs protested the prorogation of parliament.

Parliament has been shut down for five weeks after chaotic scenes with MPs saying they have been silenced.

The suspension of parliament ordered by Johnson has taken effect after Johnson’s sixth Commons defeat in a week as MPs voted against his proposal of an election.

“This government will not delay Brexit any further” insisted Johnson.

Opposition MPs shouted “shame on you” at Tory MPs.

Speaker Bercow said: “This is not a normal prorogation,: as MPs held up signs saying “silenced.”

The Labour Leader Jeremy Corbyn said suspending parliament was to avoid scrutiny. “This government is a disgrace,” he said “and the way it operates is a disgrace.”

Labour MP Lloyd Russell-Moyle appeared to try to hold on to Speaker John Bercow at the point he was requested to lead MPs to the Lords, with doorkeepers intervening. Other MPs shouted and sang protest songs.

The unusually long period between the ceremony of prorogation and the Queen’s Speech on October 14 has provoked warnings about a lack of time to deal with Brexit matters ahead of the next deadline on October 31.

Prime Minister Boris Johnson had hoped to call a general election for mid-October but failed twice to secure enough support from MPs for his idea.

Instead, MPs approved legislation which is designed to stop the Government from forcing through a no-deal Brexit at the end of next month – something they feared the lengthy prorogation could have aided.

After a long, wild and historic night in Westminster, when the visions planted in many people’s brains were the opposition MPs’ signs of “Silenced”, a tweet from one parliamentarian whose career has been changed by Brexit summed up the mood for many.

“Parliament is now closed and our democracy silenced for 5 weeks.”

Ms Berger, now a Lib Dem after defecting from the Labour Party in part because of Jeremy Corbyn’s handling of Brexit, added a photo of one of the many handwritten “Silenced” signs left in the Commons, in reaction to Boris Johnson’s successful move to prorogue parliament for five weeks.

As opposition MPs staged a sit-in in the chamber, many singing songs of defiance such as the Red Flag, the tweets flew thick and fast.

Most ran, predictably, along party lines, but one among the throng stood out.

It was from famed British historian Sir Simon Schama, a man well placed to give the prorogation some historical context.

“Shutting parliament during the gravest national crisis since the war is an act of grotesque cowardice; but history will remember the infamy and those responsible for it with indelible contempt,” Dr Schama wrote.

The Lib Dems’ Brexit spokesman Tom Brake reported Mr Johnson’s “2nd attempt at a cut and run General Election has been defeated”, but that he “did succeed in shutting down parliament for 5 weeks”.

“Anyone would think he had something to hide!” he quipped.

“The closing down of Parliament by Johnson & the Tories provoked anger in the Commons,” Mr McDonnell wrote.

“But also in the final moments of this Parliamentary session a defiant burst of singing of the ‘Red Flag’ by Labour MPs. We will never let this extreme right wing Tory sect silence our democracy.

Labour MP Dawn Butler, meanwhile, said her party could be proud for standing up to “Boris Johnson and his bullies”.

“They called us names, and they played their games. Our democracy is not for them to trash,” she said.

Her colleague Stella Creasy reported on the “screaming and shouting on all sides” as the prorogation process began, saying it showed “the mess this parliament has become in the toxic whilpool of brexit”

“Shameful behaviour in the Commons from an opposition that claimed to respect the referendum vote but blocked Brexit; that demands an election but won’t vote for one; that puts placards on seats rather than find solutions – then has the gall to claim politics is not a game to them,” Mr Warman tweeted.

MP for Windsor Adam Afriyie, blamed the Opposition for the “chaos” in Parliament, saying they did not respect democracy or public opinion.

And Chelmsford MP Vicky Ford noted what she felt was the jarring sight of Labour MPs singing The Red Flag in the Commons at 1.30am, “after refusing to vote for a General Election”.

READ MORE: Earlier, in another defeat for Boris Johnson, MPs voted to demand the Government shares files on suspending parliament and no-deal Brexit with public. The move comes after files released in a Scottish court appeared to show Boris Johnson approved the suspension of Parliament on August 15 and his advisers had been plotting prorogation for reasons they have never admitted.