"The tectonic plates of British politics are shifting.” 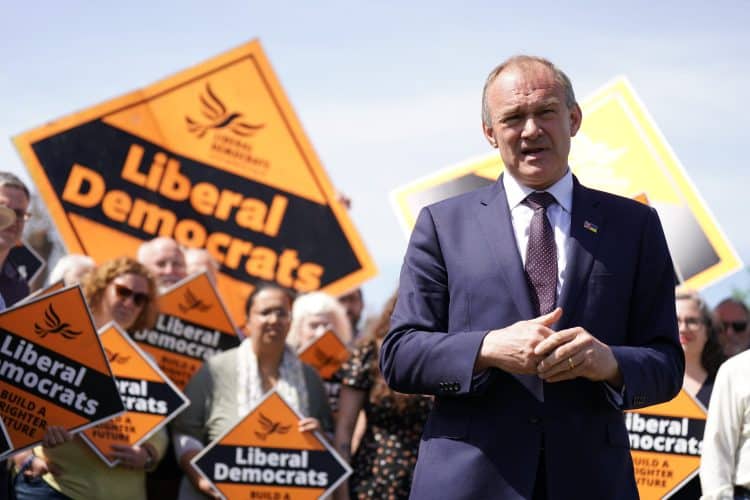 The Lib Dems will seize “Blue Wall” constituencies from Tory MPs, Sir Ed Davey has said, as he declared the party was “winning across the country again”.

The Kingston and Surbiton MP hailed Lib Dem gains in council seats and claimed Conservatives were being dragged down by a “discredited” Prime Minister.

Speaking in front of party activists on Wimbledon Common, Sir Ed said: “We are going to have a Liberal Democrat MP for Wimbledon at the next election.

“And I think there are other places where we’re going to see Liberal Democrat success for the first time ever.

“I’m really excited about the South West of England and coming back there. I’m excited about all those seats across the Blue Wall which, frankly, we haven’t been players in for a long time.”

The Lib Dem leader launched an attack on Boris Johnson, criticising the Prime Minister for attending a Downing Street lockdown party and his response to the cost-of-living crisis.

He warned Conservative MPs that if Mr Johnson remained in place then “the Liberal Democrats are coming for you”.

“They deserve an NHS where people aren’t having to wait for hours for an ambulance, and wait for days for a GP appointment.

Asked if the Lib Dems had been forgiven for their role in the coalition government of David Cameron and Nick Clegg, Sir Ed – who served as energy minister under the administration – called the local elections a “turning point”.

“The tectonic plates of British politics are shifting”

He continued: “People across our country have spoken in huge numbers. This is a historic moment for the Liberal Democrats. We are winning across the country again.”

He said the “tectonic plates of British politics are shifting”, pointing to the Lib Dems seizing Hull City Council from Labour.

As recently as Thursday morning, he had sounded sceptical about the chances of taking control and admitted it was a “problem” for his party.

Sir Ed also noted that the Lib Dems had become the largest party in west Oxfordshire, which he referred to as “Cameron’s back yard”.