Jo Swinson had one job - it was in her party’s slogan. 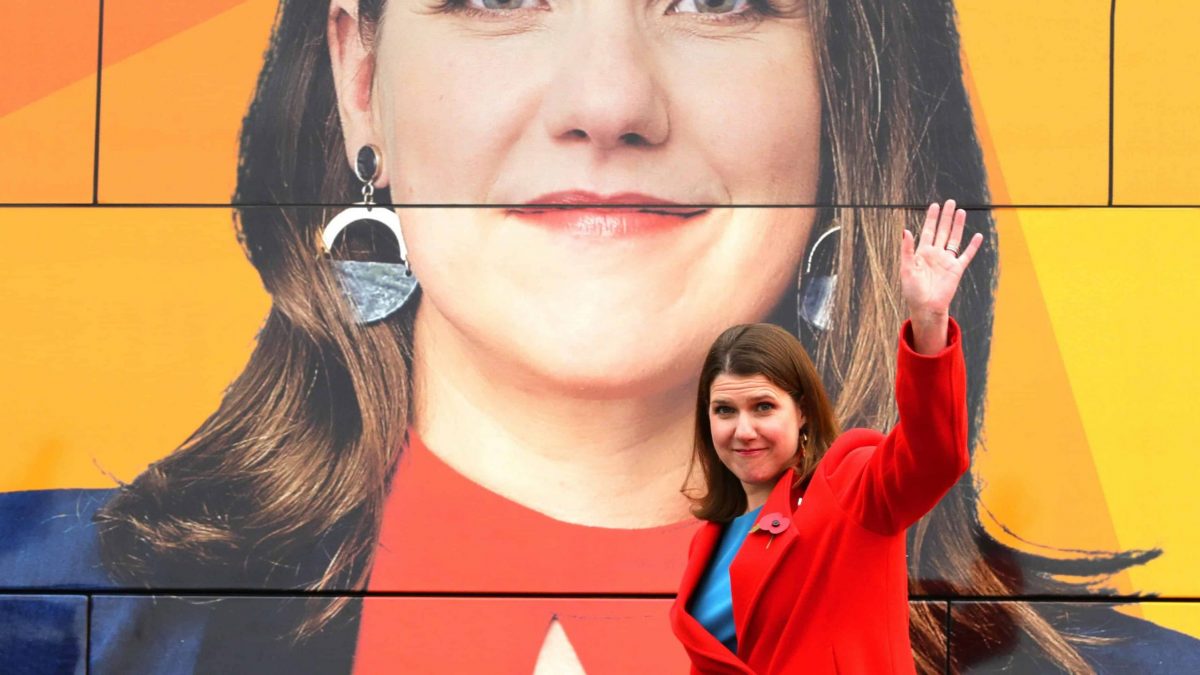 “Graceless and nasty from Sturgeon” piped Nigel Farage sanctimoniously when the SNP leader was filmed fist pumping as the Liberal Democrat Leader’s East Dunbartonshire constituency ousted her for the SNP’s Amy Callaghan.

On an election night of many dark ironies Jo Swinson lost her seat weeks after she insisted that she was running to be the next Prime Minister and would not countenance tactical co-operation with the Labour Party under Jeremy Corbyn.

Nigel Farage had much to thank Jo Swinson for.

Swinson had run on a “Stop Brexit” ticket but had done perhaps more than any other single person to ensure it definitely happens.

And happens with little parliamentary scrutiny.

Stop Brexit was meant to be Jo Swinson’s thing

Five months earlier “Stop Brexit” had seemed a vote winner to the new Lib Dem leader, replacing Vince Cable as over 100,000 people swelled the Liberal Democrat’s membership and coffers in what they dubbed “the Swinson surge.”

And up to October, parliament’s most deluded inhabitant appeared to be Boris “dead in a ditch” Johnson. – Within days of becoming the Conservative Party leader he’d made his own government a minority by sacking any of his MPs troubled by the country facing a no-deal disaster. And by doing so he was now unable to win any votes which made the devastation of a no-deal Brexit a possibility for Britain.

Boris Johnson was meant to be dead in a ditch

And that’s where the UK would still be – Boris Johnson not quite “dead in a ditch” but forced to allow parliament – where his Brexit ultra ERG cheerleaders were a minority – the time to scrutinise his Brexit deal, to see if it really was a good deal for Britain, interrogate its threats to the unions of the United Kingdom, contain the threat of a no-deal Brexit and perhaps give the people the final say – more of a possibility now than at any time since the 2016 referendum.

Jo Swinson had one job – it was in her party’s slogan now – to “Stop Brexit” – and if she had stood firm with other parties calling for a second referendum rather than giving in to the Prime Minister’s constant bleating for a Brexit election, she might have.

If she had agreed to a vote of no confidence with the Leader of the Opposition an interim leader, as tradition dictates, to sort Brexit out and give the people the final say, national polling had consistently suggested most Brits would have voted to exit from Brexit and remain in the EU.

But no, Swinson insisted she would not participate in a government of national unity even temporarily led by the Labour leader.

Sensing an opportunity for the Lib Dems to capitalise on being “the party of Remain” she agreed to Boris Johnson’s constant squeaks for a general election to get him out of his minority government trap.

When Swinson broke ranks, and the SNP joined her, Labour could not stem the calls for a general election any more. – An unwinnable election held just when a winnable People’s Vote was at its likeliest yet.

-Especially unwinnable for Jo Swinson. She based her election campaign on a vow to just cancel Brexit without so much as a referendum as the now rebranded “Jo Swinson’s Liberal Democrats” – a promise that appalled even Remainers in how undemocratic it was for a party with the word “Democrats” in it – and also how deluded it was in that it relied on the Lib Dems somehow winning more votes than any other party.

Every time Swinson appeared on TV, her polling dropped as she instantly replaced Boris Johnson as the most deluded person in politics. By the time she started talking about a second referendum again, rather than having to win a majority to just ban Brexit, the Lib Dems were trailing miserably in their target seats.

52% of voters voted against Johnson’s Brexit.

When Johnson was contained in a minority government, his vehement opposition to a second confirmatory referendum was based on a year of opinion polls revealing the public would vote to remain.

And despite what Johnson now says about his “stonking mandate” to “get Brexit done,” in yet another dark irony of the election, 52% of voters voted for parties standing against his Brexit.

But unlike a referendum in which that would have meant voting to remain in the EU, the remain vote during the election split between Labour, the SNP, the Liberal Dems, Plaid Cymru, the Greens and former Tory independents.

Meanwhile the Brexit Party only actually campaigned against Labour, doubling up on the Tory message of getting Brexit done. In a “Brexit election,” Boris Johnson only needed a large minority of voters to believe his constant refrain – echoed across the media and an unprecedented splurge on social media – that he was going to “get Brexit done.”

A ‘Remain Alliance’ that split the Remain vote

Swinson’s “Remain alliance” with just Plaid Cymru and the Green Party now seems like a sick joke without Labour and the SNP too.

Growing pleas from the People’s Vote campaign and even from her own candidates – three of whom endorsed Labour candidates to give them the best chance possible – fell on deaf ears as Swinson ruled out standing aside in any constituency to stop the predicted Conservative majority.

The Lib Dems wouldn’t even stand down for Labour in Boris Johnson’s seat and Labour, in turn, dug their heels in too and wouldn’t support the Lib Dems even in Dominic Raab’s constituency.

Many Brits did vote tactically, but not nearly enough.

And in an appallingly dishonest campaign the “Swinson surge” in donations was squandered on misleading leaflets and letters to constituencies all over the UK where Lib Dems didn’t stand a chance. These claimed that the Lib Dems were the tactical choice, not Labour, even in seats where that was far from true. Untold numbers of tactical voters were purposefully misled by the Lib Dems.

When we revealed that the Liberal Democrats sent letters masquerading as real tactical advice all over the country, we asked the Lib Dem press office why they were spending a fortune on misleading voters in seats they couldn’t win? Why the “Stop Brexit” party were wasting resources on stopping Labour winning, ensuring a huge Tory majority and the possibility of no-deal? We just got the response that leaflets were true at the time of publishing. Another lie.

For example, Labour MP Emma Dent Coad had won the Kensington seat with a slim majority of just 20 in 2017, seen her constituents through the trauma of the Grenfell tragedy, and lost to the Tories on the 12th after misleading Lib Dem leaflets peppered the constituency, falsely claiming that Lib Dem candidate Sam Gyimah far behind in third place with half the votes was the only option to beat the Tories. All they did was split the vote, and ensure Emma Dent Coad lost by just 150 votes, further increasing a Tory majority.

And they continued to split the anti-Tory vote when it had become increasingly unlikely the Lib Dems could do much in most seats but stop Labour stopping a massive Conservative majority.

‘You tried to hijack a movement and screwed us all’

Under party rules, Jo Swinson lost the leadership of the Lib Dems as she lost her seat on Friday morning.

Weeks after she announced she was campaigning to be the next Prime Minister of the (perhaps less) United Kingdom and instead made herself unemployed, having given Boris Johnson the biggest Conservative majority since Margaret Thatcher with an army of MPs forced to sign pledges to follow his lead on Brexit wherever that may lead the country, with no senior Tory ruling out a no-deal Brexit any more – an increasing likelihood as nobody believes the timetable Johnson has given Britain to renegotiate all its relationships with the EU is possible, only Jo Swinson can tell us what is going on in Jo Swinson’s head. But we can hazard a guess.

In Jo Swinson’s farewell from politics, she kindly consoled people with the message:

“There will be a way out of this nationalist surge, and we have to work together to find it.

“It’s a huge job to be done, the answer is that we step up, we organise, we join together.

“Though I won’t be your leader I will be walking alongside you.”

Among the messages of good will on Twitter there were many reactions of utter disbelief.

One of them wrote a fitting epitaph to her career: “You threw away all the work done to challenge Brexit in favour of giving Johnson the GE he wanted, fronted a narcissistic campaign that killed the resurgence  and now we have a Tory majority for Brexit.

“You tried to hijack a movement and screwed us all.”