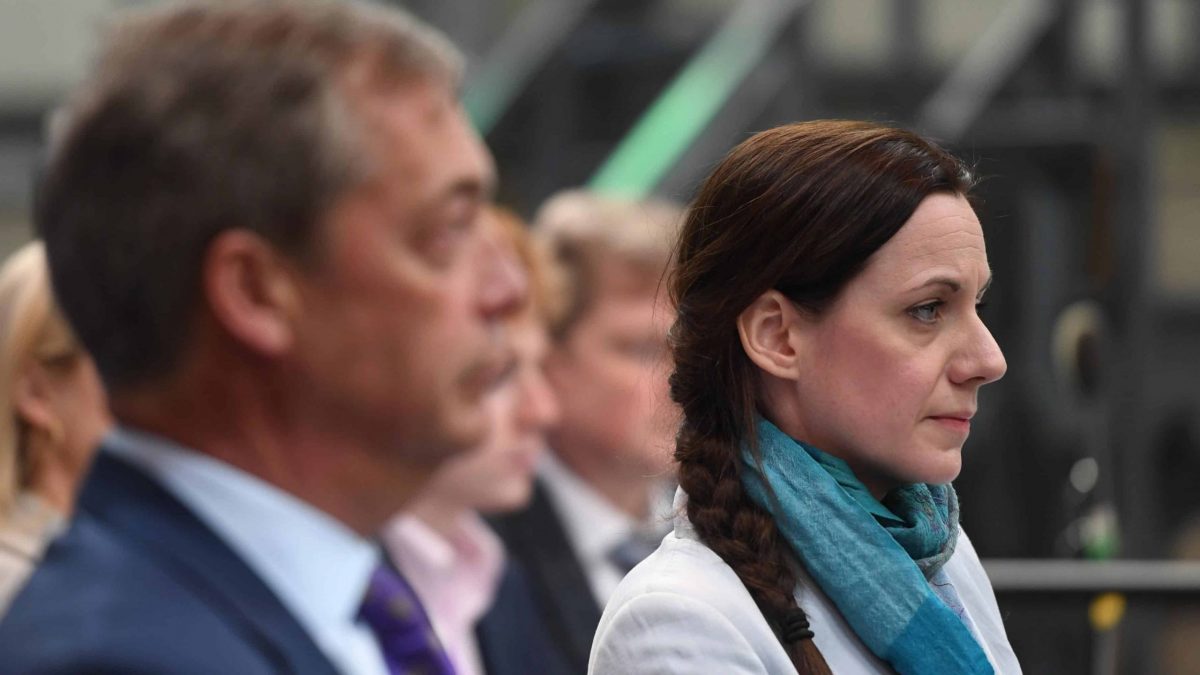 Secretive Tory AND Brexit Party donor Arron Banks boasted in November that Nigel Farage has “shaped the Conservative Party in his own image” – just days after the Brexit Party leader announced an election pact with Tories.

And now, months after Conservative grandees such as Ken Clarke left his party of five decades warning it was turning into a troubling, nationalist version of the Brexit Party, three MEPs who quit – and one who was sacked by – the actualBrexit Party have joined the Conservatives.

Annunziata Rees-Mogg – sister of Commons Leader Jacob Rees-Mogg – Lance Forman and Lucy Harris resigned the Brexit Party whip only a week before the election to back the Prime Minister’s push to “get Brexit done”.

They were joined in uniting behind the Conservative Party leader by John Longworth, who was sacked for “repeatedly undermining” leader Nigel Farage’s election strategy only days before the trio’s walkout.

The four confirmed they have switched allegiance to become Tory MEPs in the European Parliament, in a move that will more than double the number of Conservatives in Brussels.

It takes the number of Tory representatives to seven. Their employment will not last long, however, as all UK MEPs will lose their positions after Britain leaves the European Union on January 31.

The ex-Brexit Party cohort had been sitting as Independents since walking out on Mr Farage’s fledgling outfit on December 5.

Geoffrey Van Orden, leader of the Tory MEPs, said: “We welcome the reinforcement of our Conservative delegation in the final weeks of membership of the EU.

“Additional MEPs coming across to us is evidence that the Prime Minister is delivering on his promise to get Brexit done and to overcome division and uncertainty.”

Who are the former Brexit Party politicians the Tories have welcomed into their fold?

The luxury food mogul is managing director of H Forman & Son after inheriting the business. He dreams of completely deregulating business by leaving the EU  and has spoken of his annoyance at pesky EU regulations on food safety inconveniencing his luxury business.

He has freely admitted that Brexit will be a catastrophe, although he chirpily expects to be a winner among the losers, expecting his business to benefit.

Formerly a chartered accountant for Price Waterhouse, Lance Forman is also a climate change denier and critic of the “global warming brigade” .

Interestingly, Lance Forman is also known as Lance Anisfeld, seemingly his real name. His son is Oliver Anisfeld, 24, who is the UK chief executive of pro-Trump, pro-low tax student group Turning Point UK – a right wing student organisation, and an offshoot of the American counterpart funded by fossil fuels and plagued by incidents of racism and the breaking of election laws. – Speaking of which, member of Turning Point UK Darren Grimes was fined tens of thousands for breaking EU referendum spending laws.

Opera singer and Brexit activist Lucy Harris apparently also worked in ‘political communications’, by which she presumably means her online wheezing about Brexit and writing for the murky climate-sceptic fossil-fuel-funded Spiked Magazine, where she tells Remainers to stop being mean to Brexiters and smearing them, while simultaneously smearing remainers as “crap” and “lousy” and saying they all live in ivory towers.

Lucy Harris got annoyed on Twitter by Led By Donkeys putting up billboards directly quoting Nigel Farage on his views on privatising the NHS, saying “I’m pretty sure they can’t do this” without stating why.

For Ms Rees-Mogg, it is a return to her former party for which she has already stood as a parliamentary candidate in 2005 and 2010.

Speaking at a press conference after quitting last month, the East Midlands MEP said her decision had not been influenced by an approach from the Tories or her Cabinet minister brother.

“I have had no approaches from the Conservative Party in any description, and I am frankly finding it really quite disturbingly old-fashioned that people are suggesting that my brother gets to tell me what to do with my political views – he doesn’t,” she said at the time.

“We have completely independent views from each other and I am only concerned about Brexit.”

The twice-failed Tory candidate went to fee-paying private school, and has worked in investment banking.

Annunziata joined the Conservative Party at the age of five and later said: “I was too young to be a Young Conservative, so I joined the main party. Aged eight I was out canvassing, proudly wearing my rosette.”

David Cameron put her on his party ‘A-list’, reportedly asking her to canvas under the name ‘Nancy’ to make it easier for voters, which she refused. She stood unsuccessfully for the Tories twice in 2005 and 2010.

As a journalist, she worked for the Eurosceptic Daily Telegraph and edited the European Journal, an anti-EU publication bankrolled by Tory MP Bill Cash’s think tank the European Foundation. She is also an occasional contributor to the BBC.

As well as being a lifelong Brexiteer, she is an opponent of the 2004 Hunting Act which banned fox hunting. As well as being pro-fox hunting, she has poked fun at global warming, expressed a wish for coal to make a comeback, and has expressed an interest in Canadian tar-sands oil.

She once wrote a wonderfully titled article called “How to profit from the world’s water crisis.”

A grammar school-educated businessman, who seems to think he’s fighting the establishment, despite being a former director general of the British Chambers of Commerce.

On Twitter he has a habit of retweeting racist serial-liar troll Katie Hopkins, along with various scumbags in politics.

Geoffrey Van Orden, leader of the Tory MEPs said the four were now in the process of being admitted to the European Conservatives and Reformists Group in the European Parliament.

Brexit Party candidates accused the Tory Party of cajoling and bribing their candidates to stand down during the General Election, with Nigel Farage accused of betraying the Brexit Party faithful after withdrawing candidates in Conservative seats.

READ MORE: Everything you wanted to know about The Brexit Party European Election candidates… but were afraid to ask