Mrs Johnson "has been targeted by a brutal briefing campaign against her by enemies of her husband", a spokesman said. 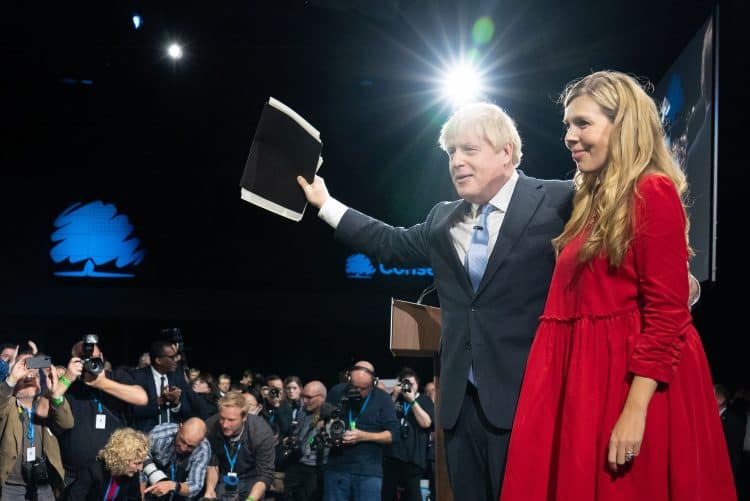 Carrie Johnson has lashed out at “bitter ex-officials” for trying to blame her for the chaos engulfing her husband’s government.

The prime minister’s wife dismissed as “nasty smears” accusations that she used her husband’s phone to impersonate him and issue instructions to officials, pressured him into reversing decisions she disagreed with and demanded the appointment of her friends to key roles.

In an unusual public statement, a spokeswoman for Mrs Johnson insisted she “plays no role in government” following the publication of extracts of a critical biography by former Tory party deputy chairman Lord Ashcroft.

Allies and critics of Boris Johnson have criticised “misogynistic” attacks on his wife, suggesting she has been subjected to greater scrutiny than previous prime ministers’ spouses.

‘Carrie would be cross’

In his book, Ashcroft accuses Johnson of appointing staff because “Carrie would be cross with him” if not, sacking officials she disliked and reversing policy after his wife criticised it.

One of Ashcroft’s sources compared their “toxic” relationship to a Greek tragedy, saying: “He could have been a great prime minister but his lack of discipline, which led him to get involved with Carrie, has cost him. His potential to transform the country has been squandered and, as far as I’m concerned, it’s because of her.”

Mrs Johnson’s spokesman said: “Yet again Mrs Johnson has been targeted by a brutal briefing campaign against her by enemies of her husband. This is just the latest attempt by bitter ex-officials to discredit her. She is a private individual who plays no role in government.”

The biography, serialised in The Mail on Sunday, alleges that Mrs Johnson began pursuing the prime minister when he was foreign secretary and still married to Marina Wheeler, his second wife, attempting to get herself appointed as chief of staff.

It claims that she demanded a string of allies be appointed to Johnson’s leadership campaign – and portrays the prime minister as easily swayed by her criticism.

One source suggests that after Johnson had agreed a decision in team meetings, “he would go home and tell Carrie everything that’d been decided, and then the phone would ring and it would be him saying, ‘We’ve got to change this, we’ve got to do that, we’re not going to do it like this any more’.”

Among the most serious allegations is that Mrs Johnson used the prime minister’s phone to issue instructions in his name during the leadership campaign. “’We’d spot the different ways things were written, because the style would change. We’d learn to spot when it was her writing the message,” one campaign insider told Ashcroft.

“So a text message would appear saying, for example, that there was a particular MP whose support we didn’t need or want. We realised Boris couldn’t have written the message because the next day Boris would contradict this.”

Sarah Vine, the former wife of Michael Gove, said there was “more than a whiff of misogyny” in the criticism – which she derided as “the political equivalent of slut-shaming”.

Writing in The Mail on Sunday, Vine said: “Whatever mistakes she may have made – and I don’t deny for one second that she has made many (as did I) – the truth is it can’t all be her fault. She is not responsible for the bad choices of her husband.”

George Osborne, the former chancellor, agreed, saying: “Whatever the flaws and faults of the Boris Johnson government — or indeed its successes — they are the responsibility of Boris, not his wife Carrie. Let’s move on from this misogynistic Lady Macbeth nonsense.”