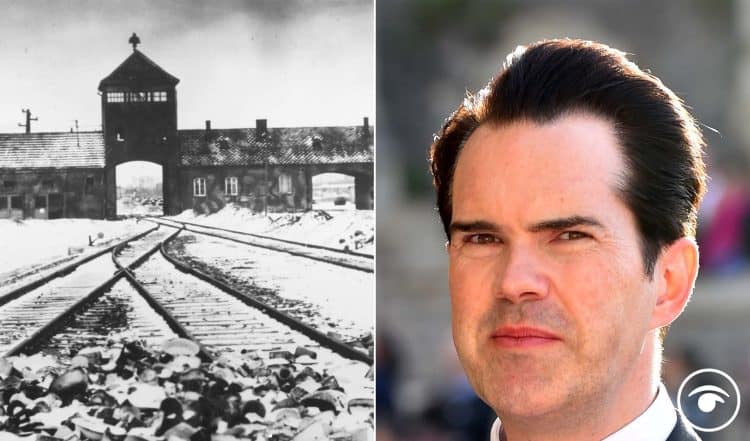 Jimmy Carr has been under heavy criticism since a clip of a joke from his new Netflix show went viral on social media. He now appears have addressed the fury at his comments during a stand up set.

The comedian, known for his stand-up and roles on shows like 8 Out Of 10 Cats, issued a “trigger warning” to the audience at the beginning of his one-hour special, admitting his performance contained “terrible things”.

In a widely-shared clip from the show, Carr joked about the horror of the Holocaust and “six million Jewish lives being lost”.

In a tweet referencing the joke, The Traveller Movement – a charity supporting the traveller community in the UK, said: “This is truly disturbing and goes way beyond humour.

“We need all your support in calling this out #StopTravellerHate @StopFundingHate.”

He initially refused to answer questions as he arrived at the Whitley Bay Playhouse for his Terribly Funny Show last night, but seemingly addressed the furore when on stage, reports The Mirror.

He told the crowd: “The joke that ends my career is already out there.”

Carr was heckled by a woman who yelled: “Are we going to talk about the holocaust?”

Carr replied: “We are going to talk about cancel culture, the whole thing.

We are going to talk about f***ing everything people. Relax.”

He kicked off the performance saying: “Good evening ladies and gentlemen. Look at that, I’ve already upset the non-binary community.

He later added: “We are speaking my friends in the last chance saloon.

“What I am saying on stage this evening is barely acceptable now. In ten years f***ing forget about it.

“You are going to be able to tell your grandchildren about seeing this show tonight.

“You will say I saw a man and he stood on a stage and he made light of serious issues.

“We used to call them jokes and people would laugh.”

He later added: “I am going to get cancelled, that’s the bad news. The good news is I am going down swinging.

“The joke that ends my career it’s already out there. It’s on YouTube, Netflix, or whatever, and it’s fine until one day it f***ing isn’t.”