"Nobody’s been interested in this area, and all of a sudden all these politicians are saying ‘we care, we care!’. And we’re all just like, ‘yeah, of course you do’." 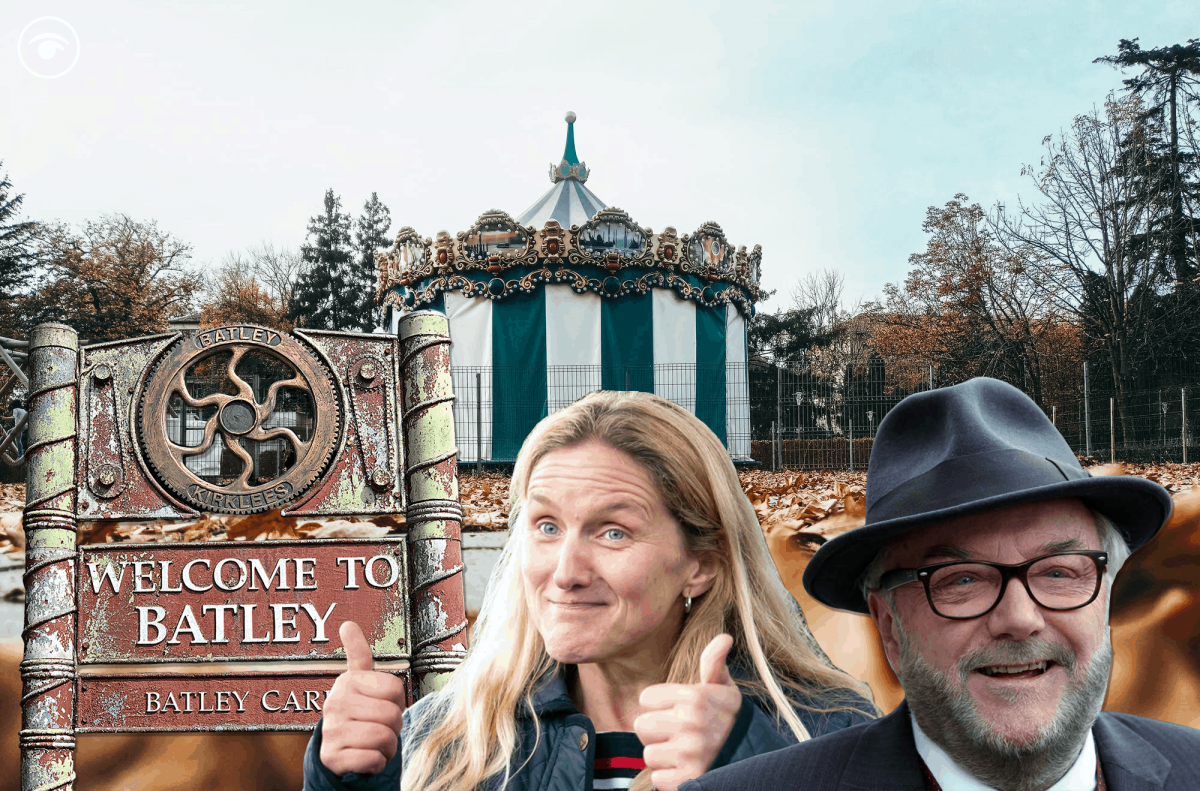 Mustafa, a cab driver, knows there’s an election coming up. He’s not sure why, or when. But he does know one thing: George Galloway is standing.

“This guy, he’s dominated everything,” Mustafa tells me. “He’s the only candidate I’ve seen. This is the man I’d choose.”

With Yorkshire’s rolling hills its backdrop and cobbled streets its stage, the circus has come to Batley and Spen.

The centre of Britain’s political universe

In the last few weeks this small town, some fifteen minutes from Leeds by train, has seen itself transformed into the centre of Britain’s political universe, as voters decide who will replace Labour’s Tracy Brabin as their new MP.

Galloway, arguably Britain’s most incendiary political character, is a big reason why. The Workers Party of Britain candidate and pro-Palestine campaigner, who handed Labour a shock defeat in nearby Bradford West in 2012, has had a seismic impact on this race.

From his campaign headquarters, an old high street pub made available to him free of charge, Galloway – more often seen on Russian state TV these days – seems to have bent this election to his will. He has a large team of volunteers, many of them from Batley’s large south Asian population, knocking on doors and canvassing. Posters and banners of Galloway – trademark fedora still in place, eyes still piercingly blue – outnumber those of his opponents.

His presence in the race has thrust foreign policy issues like Gaza and Kashmir – which one senses Labour would rather have ignored – thrust front-and-centre. Polling commissioned by the Labour Muslim Network shows Muslim support for Labour crumbling. Galloway – determined to attack Starmer from the left – has capitalised.

But his candidacy has also unleashed significant tension in a constituency with a tragic history of political violence. By-elections near-always bring brouhaha, but it’s tough to remember a more toxic race than this one.

At the weekend, Labour activists were punched, kicked and pelted with eggs. Police are investigating. Kim Leadbeater, Labour’s candidate and the sister of Jo Cox, the murdered Batley MP, has been abused in the street.

From the outside, Batley has become a by-word for something quite existential: a battle of civil, honourable politics against bigotry and dirty tricks. It’s taken on new meaning for Starmer too, with his party’s performance on Thursday an acid test on his embattled leadership.

But beyond the turmoil, there’s a much more universal story to be told in Batley: of communities which have seen their services gutted, their places neglected and their plight overlooked.

In a number of conversations with voters across the constituency, the overwhelming impression was of a people disillusioned with politics, contemptuous of politicians, and doubtful of the notion that electing a new MP might change anything at all.

“We feel abandoned,” says Anita Atkins, the 58-year-old owner of an antiques store in Birstall. Her constituency is one of many battered by austerity across the last decade. Batley and Dewsbury Magistrates’ Court was shuttered in 2012, the local A&E was downgraded in 2017 and, a year later, Batley police station was closed.

“They’ve just cut back on everything,” Atkins, who intends to spoil her ballot on Thursday, laments. “When I first lived here, we had a Citizens’ Advice Bureau in Batley – that’s gone. The police have moved out. Everything that we used to have, bit-by-bit, is going. It’s like living in the Wild West.”

Her disenchantment is shared across the constituency. In Heckmondwike, where Leadbeater and Cox grew up, banners of a fedora-clad Galloway proclaiming that he will “fight” for the town’s “fair share” overlook the main road. He has his work cut out.

Life expectancy in Batley is below the national average, and research published by the End Child Poverty coalition in 2019 found that 11,000 children are living in poverty in the area. The situation has been exacerbated by the pandemic; benefits claimants skyrocketed by 71 per cent between March 2020 and 2021.

There is understandable scepticism about the ability of politicians to do anything about it. Brabin, a former star Coronation Street, was re-elected twice after succeeding Cox in 2016 – but doesn’t seem to have endeared herself much to constituents.

“Most people haven’t been happy at all with Tracy Brabin, because she doesn’t answer messages,” Atkins says. “She just doesn’t seem to care at all. I’m quite happy she’s moved on.”

As for the cast of politicians seeking to replace Brabin, she is unimpressed. “It’s just like a circus. Nobody’s been interested in this area, and all of a sudden all these politicians are saying ‘we care, we care!’. And we’re all just like, ‘yeah, of course you do’. When they move on, what happens?”

It’s an interesting quirk of this particular race that even Leadbeater – a local candidate with a deeply compelling story – isn’t viewed as anything other than more of the same.

Some voters even expressed their anger with her selection for the seat, with one man describing it as “patronising” and suggesting Labour is chasing the “sympathy vote” by choosing Cox’s sister. He plans to vote for Galloway, because “he’s the only one I haven’t been able to see through yet.”

But perhaps a bigger issue for Labour is that the party is bearing the brunt of voters’ outrage for the impacts of austerity in the constituency, despite more than a decade of Conservative government. Rather than Boris Johnson, local ire seems to be directed at Labour-controlled Kirklees council.

“The streets are absolutely littered. Batley Park used to be beautiful, now there’s disgusting litter everywhere,” Atkins says. “If a council can’t even keep its streets clean, what chance have they got of resolving any other important issues? We pay taxes to the Kirklees council; I don’t think it’s Boris Johnson’s fault that the council isn’t looking after its streets.”

That Labour, out of power for over a decade, is still seen as the source of a local community’s struggle should concern Starmer. It’s not Leadbeater’s fault. As likeable and charismatic as she is, she has been unable to articulate a message or vision in this race beyond decrying the division or Galloway and calling on voters to unite and elect someone local. There’s a simple reason for that: there doesn’t seem to be one.

That is a significant factor in why Batley’s next MP is, for the first time since 1997, unlikely to sit on the opposition benches. The Conservative candidate, Ryan Stephenson, has been almost entirely absent from the guts of this election, sitting on the sidelines, poised to stroll to victory.

This is not, as some have suggested it should be, a cue to lambast Galloway for splitting the Labour vote. Nor is it setting the stage to frame all those who cast their ballot for Galloway over Leadbeater as misguided bigots. Far from it.

While Galloway has been, in many ways, the story of this by-election, the real political issue for Labour is why he’s become the story – and that is as much to do with the uncertain direction of the party as it is the rabble-rousing extremist exploiting that indecision.

Ultimately, when the circus moves on, the residents of Batley and Spen will remain. And none of them I spoke to seriously believed that any MP – red, blue or bizarre – will change things for the better.

“A lot of us just think that it doesn’t matter who gets in,” Atkins tells me, shaking her head. “None of them are going to look after us.”

Related: No extension for settled status applications – but war on chilled meats postponed