"It just feel like it's another typical situation of Boris. There's no real foresight on it. It's dealing with things on a wing and a prayer." 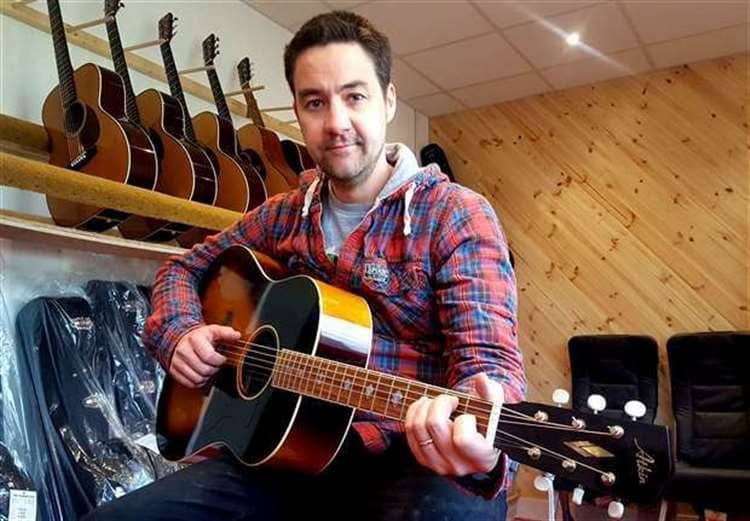 A guitar-maker for stars like Ed Sheeran and Sir Paul McCartney has said Brexit has now made it easier to send an instrument to South Korea than France.

Alister Atkin, 47, said import rules have caused havoc for his small business and deliveries are a nightmare.

The luthier has said that what used to be a pain-free process for European goods “collapsed” in January and six months later has only started showing small signs of improvement.

He works from his small workshop near Canterbury in Kent, at Atkin Guitars, and exports handmade instruments all over the world.

One of the country’s leading acoustic guitar builders, he has been commissioned to recreate instruments for the Buddy Holly Educational Foundation

While the majority of his clients are amateur guitar enthusiasts, he has had interest from many stars including Bruce Springsteen.

Mr Atkin said: “I can get a guitar to Chicago in three days, but it takes 10 days to clear into Dublin.

“I’d have less hassle sending a guitar to South Korea than just across the water to France, which is crazy.

“Getting goods back from Europe to repair has also become a major ordeal, even with the right paperwork.

“It incurs a full VAT bill from the original sales price just to get it into the country – even when you have filled out a temporary repairs form.

“And sending goods back out often incurs charges on the other side.”

He also previously featured in the ITV Made In Britain series, which highlighted the best of British industry.

He and his small team of luthiers hand build around 350 guitars a year. Such quality does not come cheap, with prices starting from £2,595.

Mr Atkin added: “It’s incredibly frustrating and added stress at a time you don’t need it and, for me at least, nothing like Brexit was promised to be.

“For example, if I want to buy rosewood from Spain, it now takes eight weeks to import CITES-listed woods from the EU to the UK and costs £300 per shipment. Six months ago it cost nothing and took two days.”

He said he has now been forced to work with a distributor which costs money, but says he predicted the chaos Brexit would bring.

He said: Because I’m used to importing and exporting outside the EU, I could see exactly where this was going to go.

“For years I’ve been moving stuff in and out of America and that incurs costs.

“People who buy from us from America are shocked they have to pay duty because they’ve never bought something from the UK.

“When it comes to Europe now, it does put people off. Someone bought a guitar from us a few weeks ago and it took a month for the guitar to get there as it got stuck in customs.

“The first month, January, was a sh*t show. No one really bothered shipping anything.

“It’s been six months now and things are getting a little bit easier, but people need to know that things are not going that well for some people.

“A small business is anything from up to 50 people turning over something like £6.5 million. We have eight people working here and we don’t turn over anything like that sort of money.

“We’re spending extra time in trying to negotiate all these situations. Half the time the government doesn’t have any answers for us and it becomes very difficult.

Wing and a prayer

“You can have someone from HMRC saying it should be like this, but it’s not.

“I know this is only a small part of this whole problem. I’m trying to not bang on about it – I am pissed off about leaving the EU – but I realise this is what happened and it was decided years ago this was what was going to happen.

“It just feel like it’s another typical situation of Boris. There’s no real foresight on it. It’s dealing with things on a wing and a prayer.”

Mr Atkin said he recently posted about his frustrations on a community forum website.

“The interesting thing is that before Brexit when I queried how easy business might be, there were loads of responses from leavers saying everything would be fine,” he said.

“But not a word when I post what problems I’m having.”